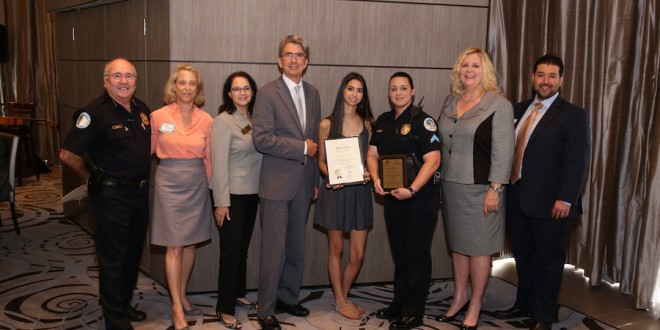 (July 28, 2015) – The distinguished award presented by the Aventura Marketing Council (A.M.C.) for Officer of the Quarter went to a female supervisor for the Sunny Isles Beach Police Department.

Corporal Cary Vesco was recognized and honored for her keen police instincts over the Memorial Day Weekend. As the busy weekend was concluding on Monday afternoon, Memorial Day, undercover detectives stopped a vehicle for several traffic violations. While conducting their stop, officers noticed one of the subjects try to hide an UZI semi-automatic firearm in the vehicle. Detectives continued their investigation and that is when Corporal Vesco noticed something amiss.

Corporal Vesco observed another male nearby trying to conceal a firearm from his waistband into a shirt. That suspect turned out to be with the original group of suspects who were all visiting for Urban Beach Weekend headed to South Beach. Unfortunately they did not make it due to the diligent efforts of both the street crimes unit and Corporal Vesco.

A most gratifying moment for Corporal Vesco as she received her award sponsored by the A. M. C. and Christine Lee’s Restaurant. But even more gratifying was that her teenage daughter Kaylee was also on hand for the presentation. That made both mom (Cary) and daughter (Kaylee) very proud.

Congratulations to Corporal Vesco and to your Sunny Isles Beach Police who worked long hours over the Holiday Weekend to keep you safe in our community.