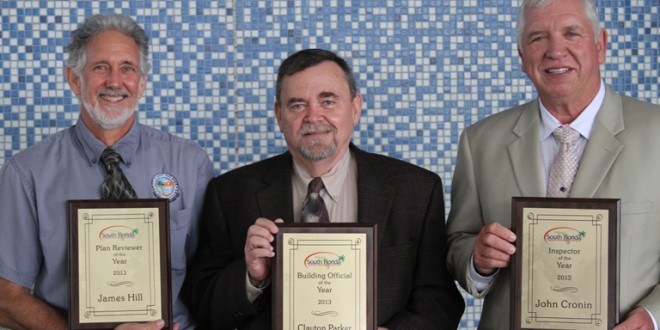 (July 9, 2013) – Every year, The South Florida Building Officials Association, a chapter of the Building Officials Associations of Florida, recognizes three code officials from the different municipalities within the Miami Dade County area. The Awards are given to a Building Official, Plans Examiner, and Inspector whose work and dedication exemplifies their willingness and commitment to the public’s life-safety and welfare. The winners of the Awards are voted on yearly by members of the association, comprised mainly of building code officials (Inspectors, plans examiners, building officials) and contractors.

This year, members of the City of Sunny Isles Beach Building Department were the proud recipients of these three Awards.

Mr. Clayton L. Parker, Building Official, was awarded the 2013 Building Official of the Year Award. Mr. Parker is an exemplary professional who has served the City of Sunny Isles Beach since the year 2000. His leadership, commitment, and loyalty to the City has awarded him not only the respect of his peers, but also the respect of developers, contractors, and his employees.

James Hill, Chief Building Inspector, was awarded the 2013 Plans Examiner of the Year Award. Mr. Hill joined the Sunny Isles Beach Building Department in 2004. His knowledge of the different Building Codes and regulations as well as his dedication to his job make him an invaluable addition to the Building Department’s team.

John Cronin, Chief Plumbing Inspector, was awarded the 2013 Inspector of the Year Award. Mr. Cronin has served the City of Sunny Isles Beach since the Building Department’s inception in 1998. Mr. Cronin’s expertise in the plumbing trade is an asset not only to the Department but to the City as a whole.

The Building Department is honored to have, as part of its team, a dedicated group of professionals and congratulates Mr. Parker, Mr. Hill, and Mr. Cronin, for such a great accomplishment.