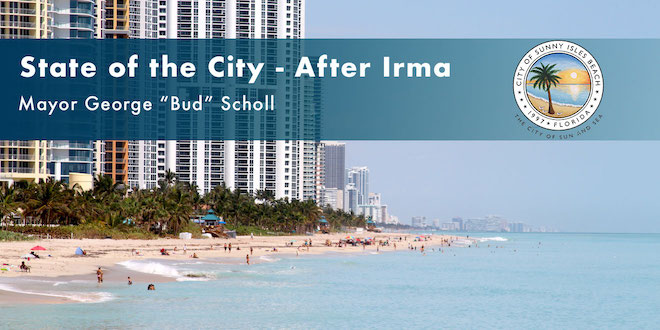 Message from our Mayor: State of the City – After Irma

(September 15, 2017) – The past week has been a very difficult and stressful time for everyone in Sunny Isles Beach and throughout Florida. As we all know by now, we were spared what could have been a catastrophic event that would have changed our community for years to come. The images from the lower Keys are just a glimpse of the impact that we may have been faced with in our own community.

With that said, our City still sustained a fair amount of infrastructure damage in addition to many of our residents still not having their electricity restored. On Monday morning, throughout our City, we had downed power lines that were still live, damaged power poles that were dangling, and a lot of vegetation and debris blocking roads and sidewalks. Nearly all of our traffic signals were either broken or inoperable. Our City staff and outside contractors mobilized at 7:00 am, and in the next 36 hours, completed 5 days’ worth of work. The City Manager, Chief of Police and I had to make the unpopular decision of keeping the City locked down until we were sure that conditions were safe for residents to return. This upset a lot of people, but I must tell you that the conditions were simply not safe enough to open the City back up until Tuesday morning. We received a lot of rapid assistance from county and state officials in getting FPL to deal quickly with our most critical needs. This was invaluable as the demand for FPL’s services remains overwhelming.

Your Police Department, City Staff and outside contractors deserve our highest appreciation for getting our City up and running so quickly. In addition to the monumental push in the first 36 hours, they have continued their intense efforts all week in what has been sweltering conditions outside. A special thanks to my neighbors, the Ortiz family and their company Horsepower Electric, for answering my call to focus their electrical contracting resources in getting our streets cleared of downed power lines and some of our critical traffic signals operational again.

Commissioner Svechin has been leading a group of community minded volunteers in assisting with clearing debris from our streets, sidewalks and parks. In the first few hours after the storm, as the City Manager, Chief and I contemplated what we needed to accomplish, we all agreed that in these difficult situations, our highest priority is the safety of our residents, even if the decisions insuring that safety are highly unpopular.

My fellow Commissioners and I hope everyone made it through this storm safely and can get their lives back to normal as quickly as possible. For as difficult as this week continues to be, we were truly blessed with this outcome.