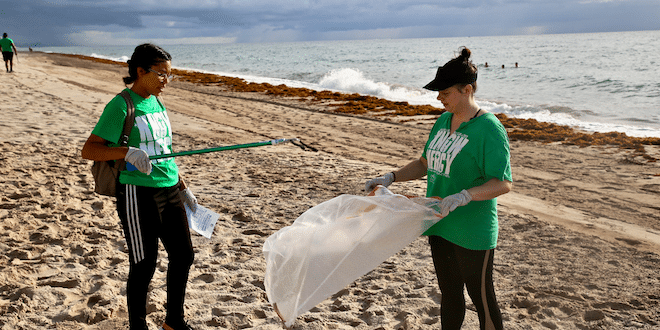 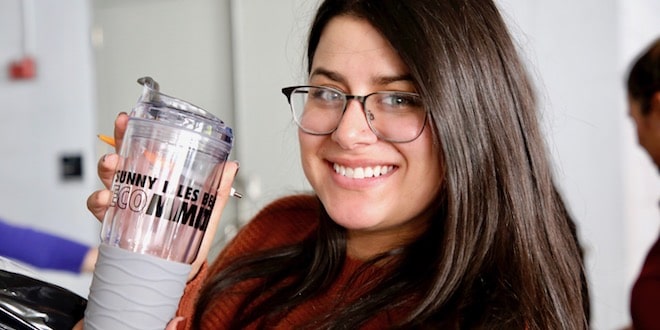 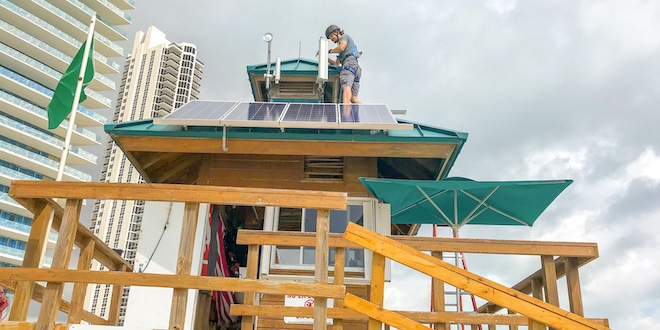 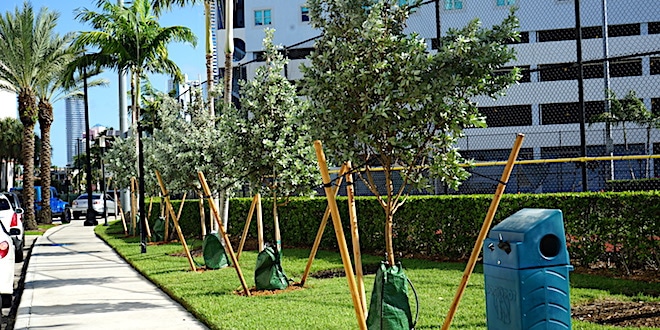 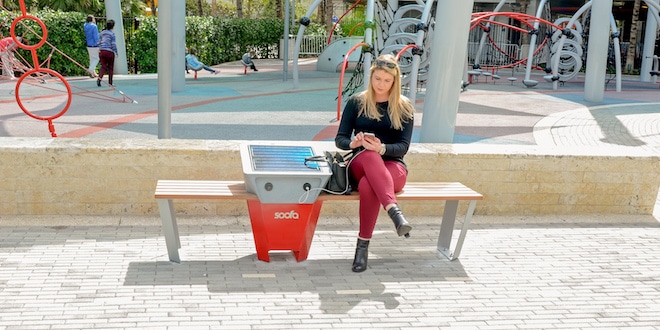 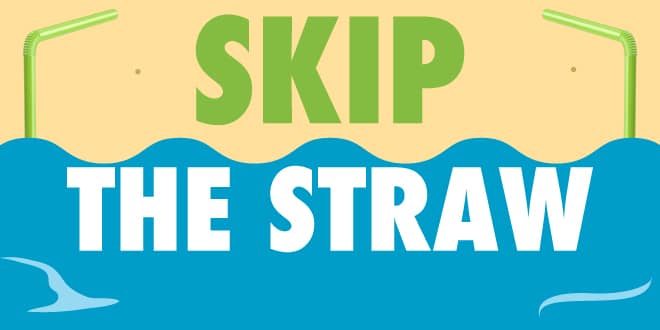 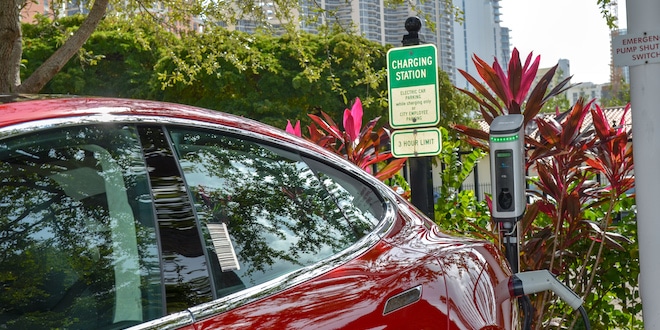 Report illegal dumping in our waterways to the Florida Fish & Wildlife Conservation Commission at myfwc.com/contact/wildlife-alert.

Sunny Isles Beach is “ECOMMITTED.” In a campaign called, “ECOMMITTED,” the city is promoting and fostering more eco-friendly and eco-driven adjustments that everyone can make in their daily lives to help save the planet. In addition, the city will be sharing the actions it has been taking throughout the years to be “ecommitted.” As a coastal community, Sunny Isles Beach is aware that taking care of our environment reaps only positive rewards and is imperative for any forward-thinking city. For the last several years, the city has been dedicated to saving electricity and water, as well as finding unique ways to implement renewable resources to provide services for residents and visitors.

In October 2019, the City Commission voted to enact an ordinance, which officially prohibited the distribution and sale of plastic beverage straws in Sunny Isles Beach beginning January 2, 2020. It is estimated that in America, more than 500 million straws are used every day. And most of these plastic straws end up in our oceans harming marine life and polluting the water. The Commission believes that implementing this ban will be one more way to be an “ecommitted” city. Read more about this ordinance at sibfl.net/skipthestraw.

We are in the midst of conducting a Flood Adaptation Assessment, which identifies flood vulnerabilities and what adaptive measures will be most effective. We were awarded funding through our membership with the American Flood Coalition (AFC), along with the Town of Surfside, as part of a micro-regional flood adaptation assessment with our two municipalities. Our goal is to leverage the study’s findings to plan new capital improvement projects and secure funding from the county, state and federal governments. The study is underway, with expected completion by the end of January 2020. Simultaneously, another study on stormwater retention is underway in the city. This consists of an analysis of Florida Department of Transportation (FDOT)-owned stormwater retention areas in Sunny Isles Beach. The idea here is to determine if and how the stormwater holding capacity of these retention areas can be increased. Also, through this unique initiative, we are fostering a stronger collaboration between the City and FDOT while looking at ways to problem solve across jurisdictions by evaluating maintenance schedules to assure that proper maintenance is routinely completed by FDOT.

Studies like this are important to improve our city as stormwater inlets and pipes have shown severe clogging with debris and overgrown vegetation. And inlet grates within these retention areas show excessive corrosion due to saltwater intrusion from high King Tides. The outfalls, which allow water in these basins to flow out to the bay, are not visible, even at low tide. This tells us that they are too low and these areas do not drain as quickly as they should, indicating that regrading of these areas may be necessary. We are also studying the potential for construction of additional drainage structures, deep wells or injection wells, in these multiple locations, all of which have the potential to provide a higher capacity to hold stormwater, in turn alleviating flooding on our streets more quickly.

In 2019, the city began hosting beach cleanups to engage community members who are interested in getting involved. Every other month, 50 to 100 of our neighbors collect hundreds of bags of trash from the beach in an effort to be more “ecommitted.” In October 2020, the city added three Fill A Bag stations to the beach. Reusable buckets hang from 6 foot posts near beach access points and provide beachgoers with on-demand repurposed buckets to fill with trash during their strolls. You can find a Fill A Bag station at the Pier Park, Samson Oceanfront Park and Bill Lone beach accesses. Additionally, on the beach, all public showers contain automatic shut-off valves to help conserve water. To promote a more sustainable energy solution, eight lifeguard towers on the beach are equipped with solar panels that power the city’s free Wi-Fi for all to use including the free Wi-Fi offered along the beach and in the parks.

Many enjoy fishing from the Newport Fishing Pier, but we ask that you do not throw cut line or hooks into the water. Each quarter, divers remove debris that collects at the base of the pier, as well as bring up snagged fishing line that could otherwise threaten sea turtles & other marine life.

We are committed to protecting our sea turtles! Sea turtle season runs from April 1 through October 31. All sea turtles are either threatened or endangered. About 600 nests are laid on Miami-Dade County beaches every year. It is estimated that only 1 out of 1000 hatchlings will survive to adulthood, making conservation efforts incredibly important. We work closely with the Miami-Dade County Sea Turtle Conservation Program to ensure all nests laid on our beaches are marked off, monitored and protected. Public outreach is undertaken each year to ask residents, businesses and beachfront hotels to keep our beaches clean, dark and flat for the safety of turtles and hatchlings. Learn more at sibfl.net/seaturtles.

Nearly all of our 11 parks have Soofa benches, where anyone can plug in and charge their devices while on the go. The best part about these benches is that they are powered by solar energy. At the 2019 Anniversary Celebration, the city distributed reusable straws and utensils to all residents and guests in attendance.

The Neat Streets Grant provides funds for municipalities and organizations in Miami-Dade County to plant trees to provide a safer and enhanced pedestrian route as an option to Collins Avenue, improve the sidewalk experience, increase shade, lower sun exposure, and improve transportation. In 2017, the City of Sunny Isles Beach was awarded a $14,000 grant. Over the summer of 2017, 49 trees were planted along 172 street, 182 Drive, 181 Street and North Bay Road. The second phase of the City’s Tree Planting project began at the end of May 2018 and was completed in October 2018, resulting in more than 180 new trees planted from 2017-2018.

Internally, city employees are becoming more “ecommitted” in their day-to-day tasks. By introducing online registration for most programs and activities, the recreation department is moving toward a paperless workflow. The department takes attendance for the After School Program and some sports programs electronically, also reducing the amount of paper used daily. At City Hall, nearly all offices and hallways have motion sensor lights installed to save electricity when employees are not in their offices. Employees are also taking a citywide pledge to be “ecommitted” and lead by example. Each employee received a reusable tumbler to cut out the use of paper and plastic cups, stirrers, and lids. And employees are now equipped with reusable bags when making supply runs to the grocery store or other shops in the area.

Polystyrene is all around us. Used to make Styrofoam, polystyrene can be found in cups, bowls, plates, trays, meat trays, egg cartons and other single-use packaging. Though ubiquitous, polystyrene is non-recyclable, non-biodegradable and poses a threat to waterways, wildlife, and the public drainage system.

Recognizing that polystyrene is harmful to the environment, the City Commission is taking action to limit it wherever possible within their purview. This resulted in a ban on the use or carrying of expanded polystyrene food articles, such as bags, containers, bowls, plates, lids, coolers, trays, cartons, cups, straws, and lids containing expanded polystyrene on City property or facilities, including our beach, parks, or Government Center, for all individuals.

Being “ecommitted” is a mindset that we as citizens of the world should adopt in an effort to leave our planet thriving for generations to come. There is no one right way to be “ecommitted.” There are countless small and large steps we can take each and every day to help make our community and our planet a better, more eco-friendly place to live. We invite you to join the conversation and share how you are “ecommitted” on social media using #ECOMMITTED

We’re promoting and fostering more eco-friendly and eco-driven adjustments that everyone can make in their daily lives to help make our city a little more beautiful.