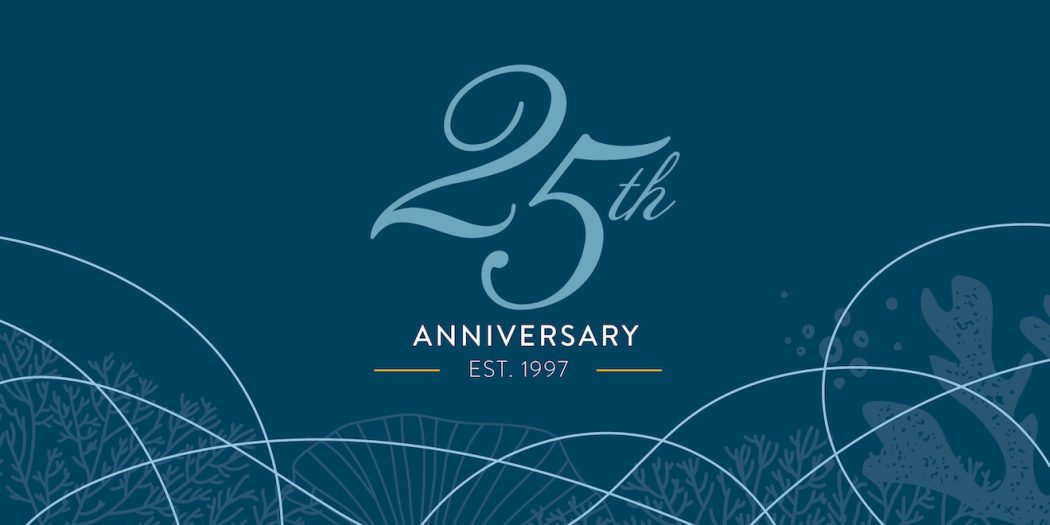 This year the City of Sunny Isles Beach is celebrating its 25th anniversary. What first started out as a small parcel of land located in unincorporated Miami-Dade, quickly blossomed into a family-friendly community known for its beautiful beaches, distinct architecture, and vibrant social life. Since the City’s incorporation on June 16, 1997, we have added many quality services to be the most responsive municipal government and increase the quality of life for all who live, visit, or do business in the city. We are a young city, yet we still take pride in the fullness of our rich history.

While we are the same captivating attraction for travelers as we once were in the 1930s, our city has certainly grown over the years. With beautiful weather year-round, crystal-clear waters, pristine oceanfront properties, and a variety of local eateries and entertainment, it’s no wonder why over 23,000 people are proud to call Sunny Isles Beach their home. Our vibrant community has grown, not only in size but also in art, culture, architecture, and technology. Our small city boasts 11 parks, providing an array of fields, playgrounds, and amenities for residents and visitors to explore the outdoors and stay active. The Sunny Isles Beach K-8 School offers an outstanding education program; and state-of-the-art City facilities, like Pelican Community Park and our newest facility — Gateway Center, offer an assortment of recreational programs, camps, and events geared toward all ages and interests. The City is also proud of the many cutting-edge technologies and conveniences we offer. In recent years, we’ve added free Wi-Fi in public areas, solar-powered car charging stations and phone charging soofa benches, and SIBshuttle mobile app. All these accomplishments and more are a small portion of the reason why the City of Sunny Isles Beach is proud to celebrate our 25th birthday.

We hope you join us in celebrating the City’s 25th anniversary all year long. Special edition, 2022 calendars are available for free at the Government Center, Pelican Community Park, and Gateway Center during normal business hours. Other special giveaways will be available throughout the year as we host a variety of fun events for the entire community. Make sure you have your valid  Sunny Isles Beach Resident ID Card so you can take part in all the events and special giveaways we have planned. You can apply for your Resident ID Card or renew an expired card online at sibfl.net/residentid.

On Saturday, May 21 we kicked off our 25th Anniversary Celebration with a 2.5k community walk and carnival. Thank you to everyone who joined us at Walk N’ Roll! Be sure to reserve your tickets for our next two events, The Isles After Dark and Celebration of the Isles below.

Celebration of the Isles | POP 2000 TOUR

We had an unforgettable night at our finale event, featuring the Pop 2000 Tour! Thank you to Ryan Cabrera, O-Town, LFO, Chris Kirkpatrick and everyone who helped celebrate our 25th anniversary with us!
Special thanks to our sponsor Elite Medical Center.
View Photo Gallery 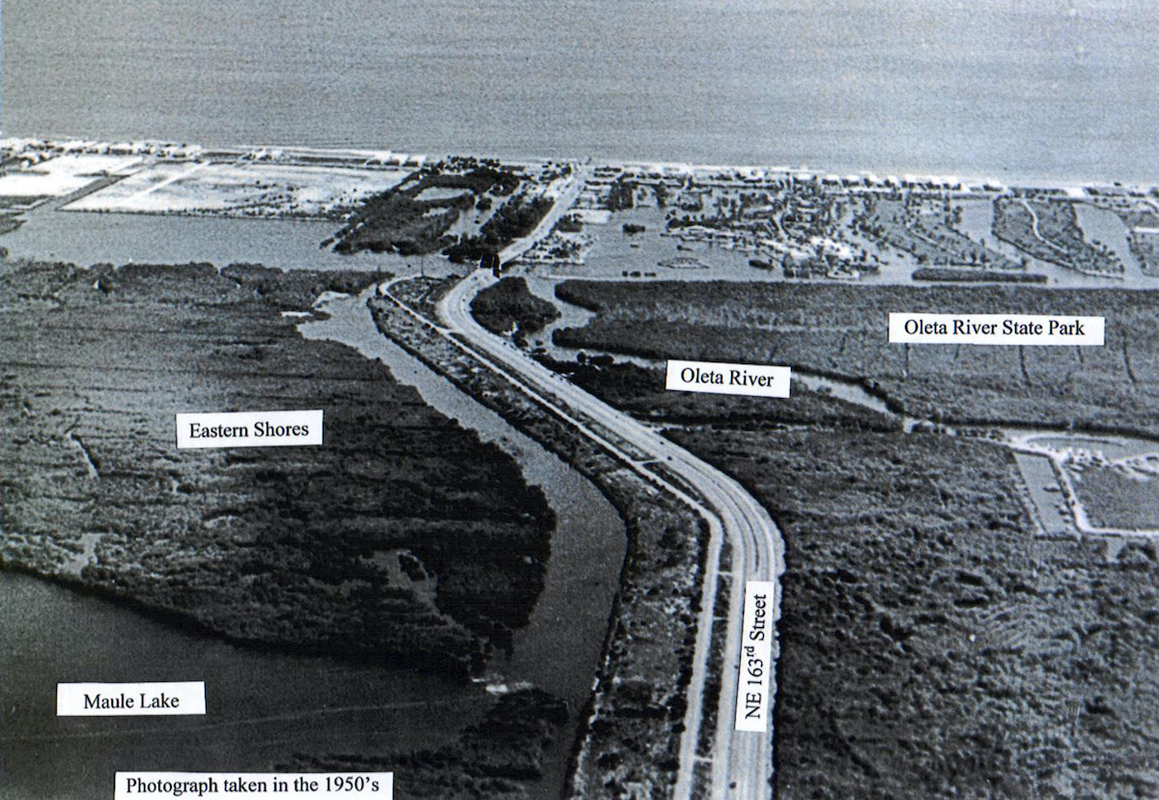 Early Sunny Isles Beach - June 1, 1953
In 1920, Harvey Baker Graves, a private investor, purchased a 2.26 square-mile (5.9 km squared) tract of land for development as a tourist resort. He named it “Sunny Isles — The Venice of America.” The area was known as North Miami Beach until 1931, then known as Sunny Isles until 1997. During the 1950s and 1960s more than 30 motels sprang up along Collins Avenue. Tourists came from all over to vacation in themed motels of exotic design along “Motel Row.” 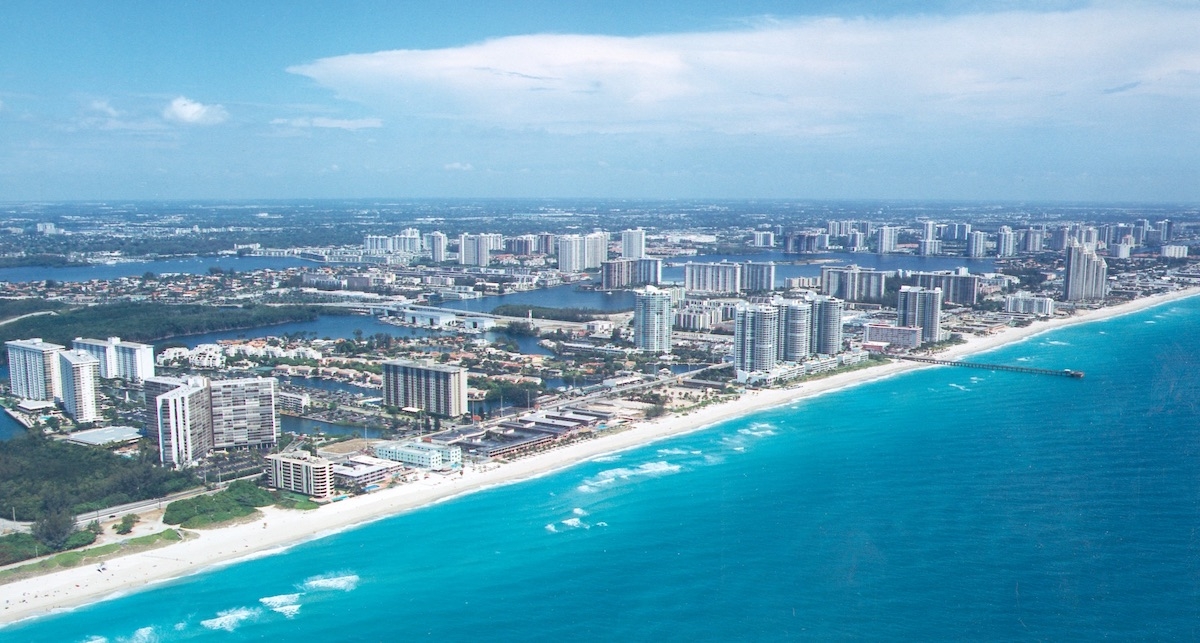 Sunny Isles Beach Officially Incorporated as a City - June 16, 1997
In the mid 1990s a group of community activists decided that quality of life for their community could be improved by incorporating the area known as “Sunny Isles” into a city. The group, which consisted of David P. Samson, Irving Turetsky, Irving Diamond, Norman S. Edelcup, and Danny Iglesias, had the backing of then County Commissioner Gwen Margolis. With the help of others who had been through the incorporation process, an election was scheduled. On January 7, 1997, the residents of Sunny Isles Beach voted to incorporate as a municipality. The vote passed with 72%. The name of the City was debated by 200 people who attended a public meeting. Some wanted to call the new City “Aventura Beach.” But the long-time residents who loved "Sunny Isles" prevailed. The compromise: the City of Sunny Isles Beach. On June 16, 1997, the City Charter was officially adopted. Residents confirmed the Charter Commission recommendation for a Council/Manager form of government. 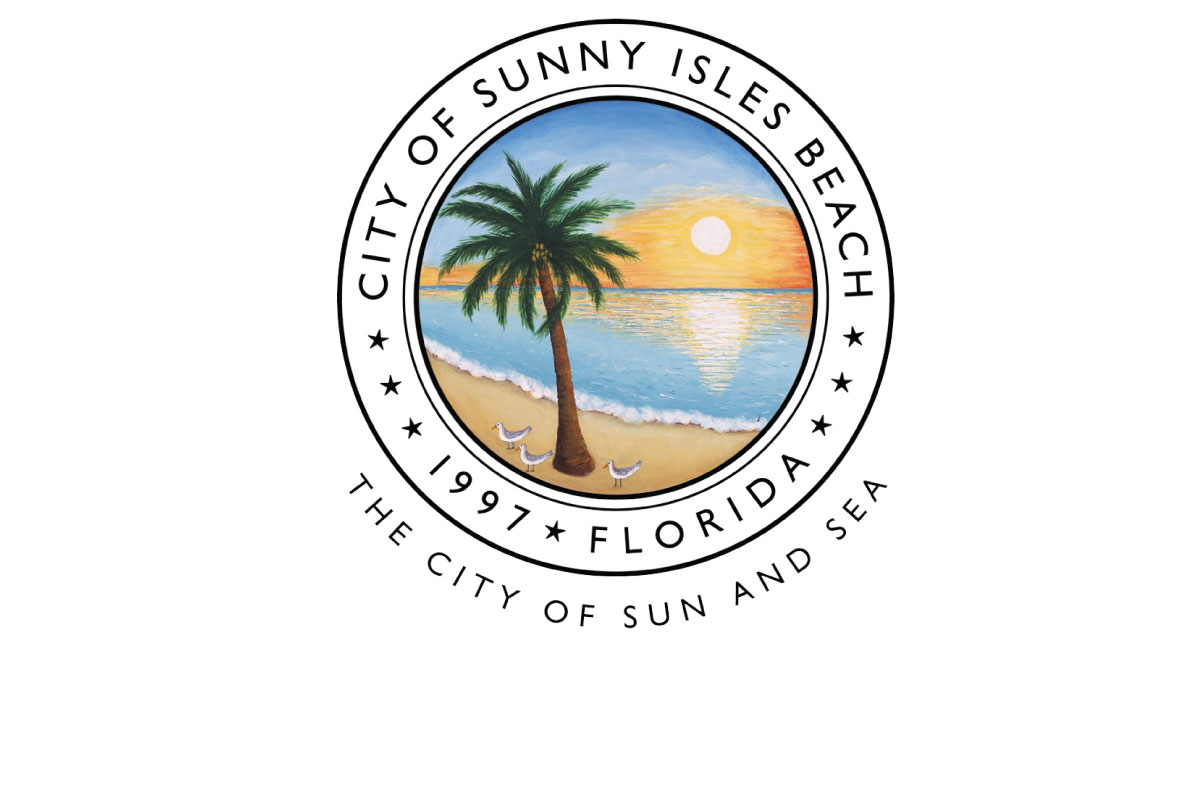 City Seal Approved - January 18, 1998
Charles Wachsberg's City Seal design was approved for official municipal use in 1998 after he won a city-wide design contest. The seal is prominently displayed at the Government Center, on Commission materials, and on the City flag. 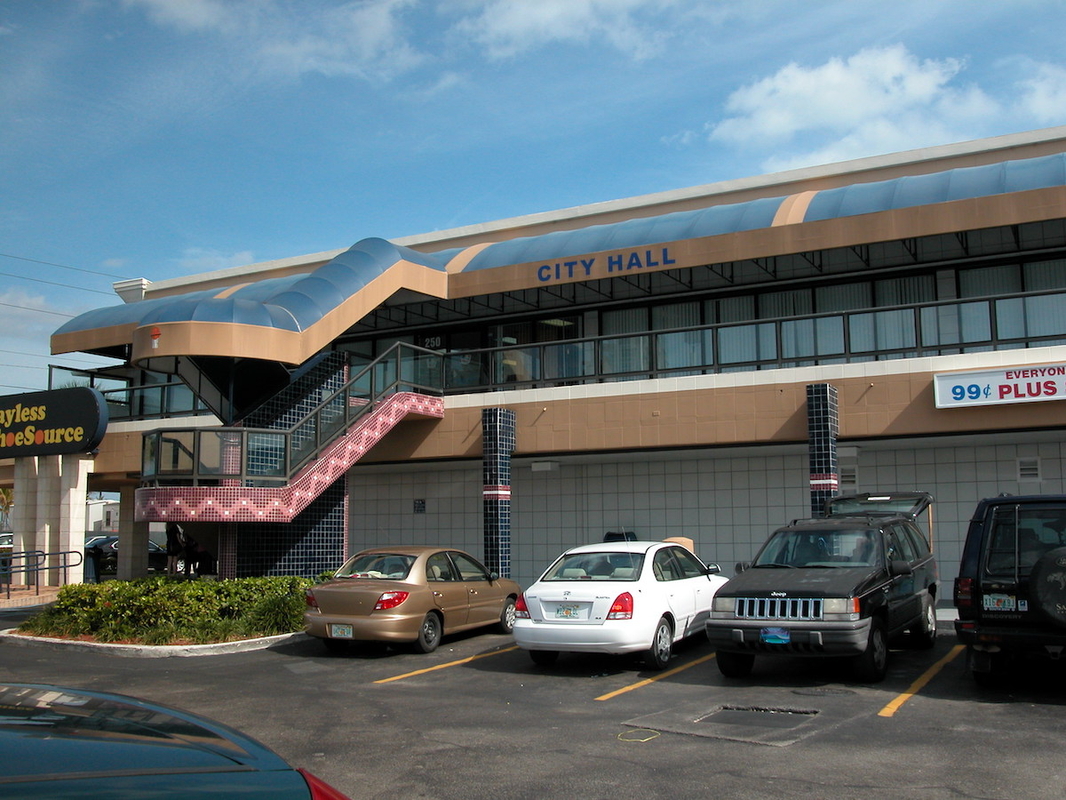 City Hall Opens & First Town Hall Meeting is Held - March 1, 1998
When the City first incorporated, there was no office space, typewriters, computers, or City Hall for the few employees the City Commission had hired. For four months the City operated by telephone from the Village of Pinecrest and Winston Towers. Finally, on March 1, 1998, this small group of employees was able to rent a space in the RK shopping plaza from owner, Raanan Katz. The first “City Hall” was a bare, concrete floor room with four employee workstations. 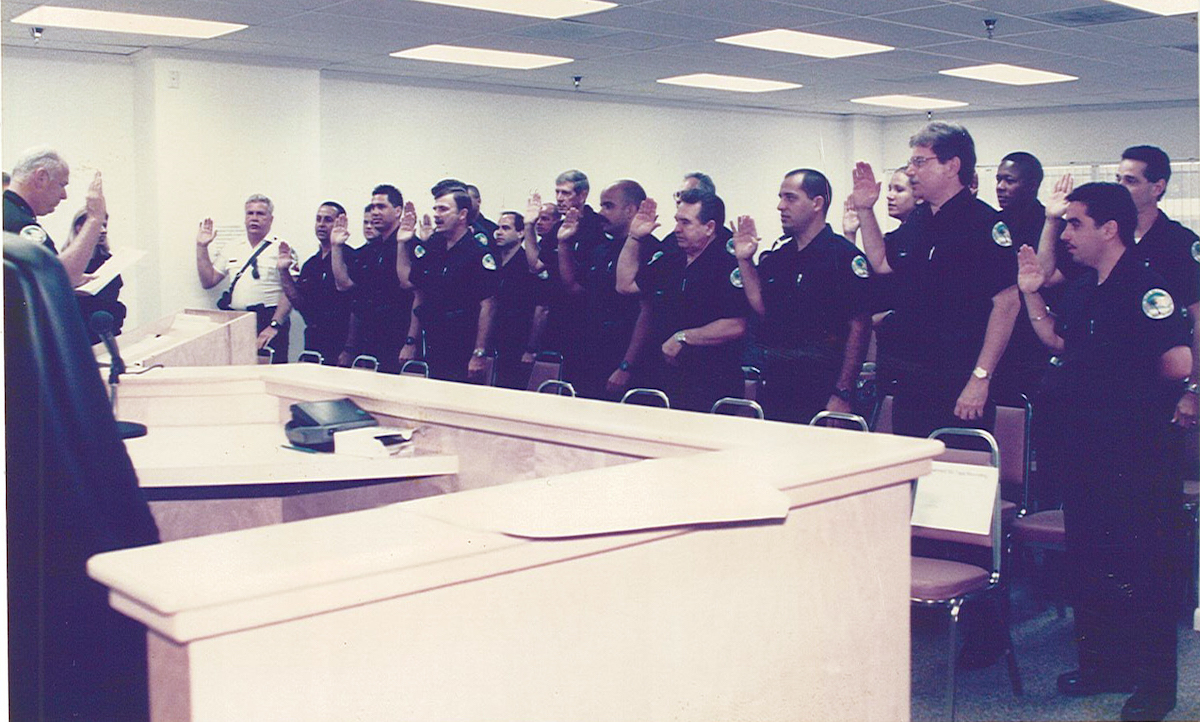 Police Department Established - August 1, 1998
Upon incorporation of Sunny Isles Beach, one of the main goals of City Officials was to establish their own Police Department. In August of 1998, the brand new Police Department, headed by Police Chief Richard Harrison, hit the streets using state-of-the-art equipment. By the Christmas holiday, the newly minted police force had formed an anti-robbery task force to cut down on thefts and purse snatchings. In a short two-three week period, seven incidents occurred. After the task force was created and an atmosphere of high visibility was perpetuated, the incidents diminished to zero. After only 5 months, the department had handled over 4,200 cases. The public expressed their satisfaction by way of letters, calls and public appearances at City Commission meetings. The Police Department grew along with the City throughout the years and is now one of Sunny Isles Beach’s most valued assets. 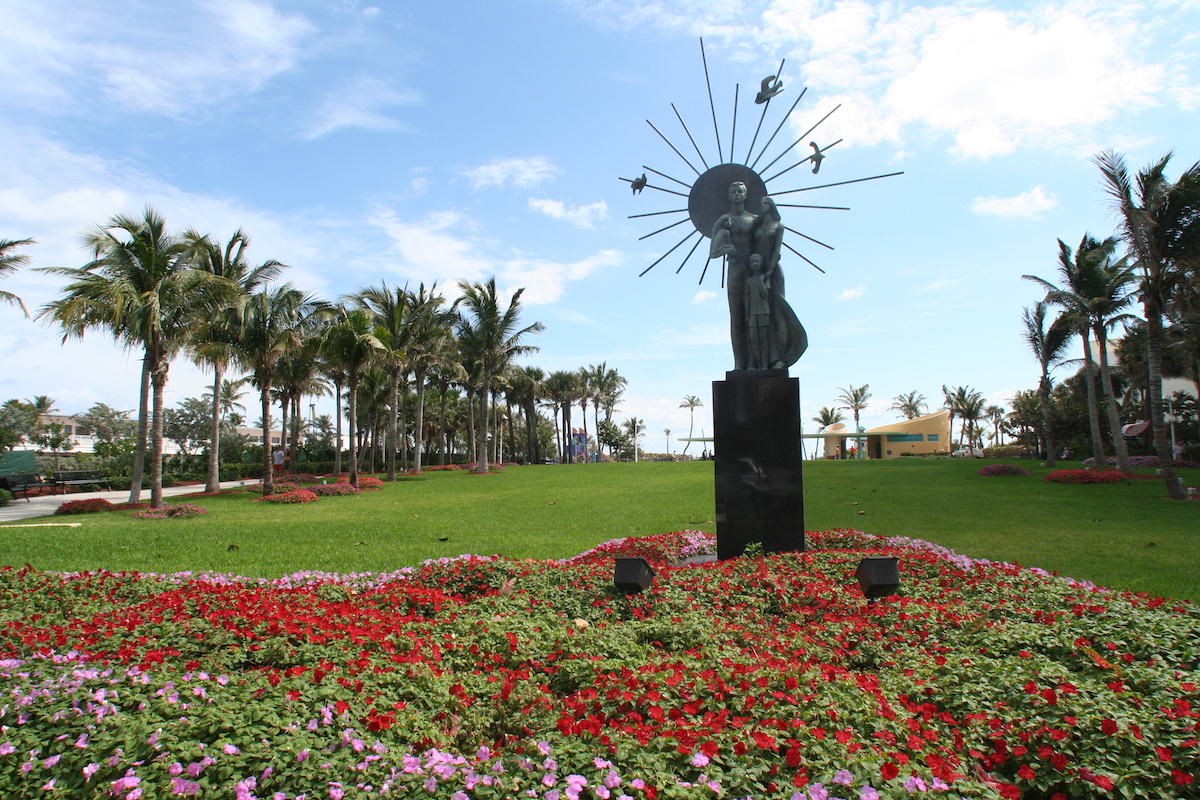 Samson Oceanfront Park, The City's First Park, Officially Opens - July 21, 2000
Samson Oceanfront Park, dedicated in honor of Gilbert Samson, is a 2.1 acre park centrally located and offering a playground area, boardwalk, and seating pavilion. Samson Oceanfront Park is publicly owned and operated as a passive natural resource-based public outdoor recreational site that was acquired with grant funding from the “Florida Communities Trust Preservation 2000 Program” and from the Florida Department of Environmental Protection’s “Florida Recreation Development Assistance Program.” Since its opening, we've added 10 additional parks throughout the city, allowing for 98% of residents to live within walking distance of a park. 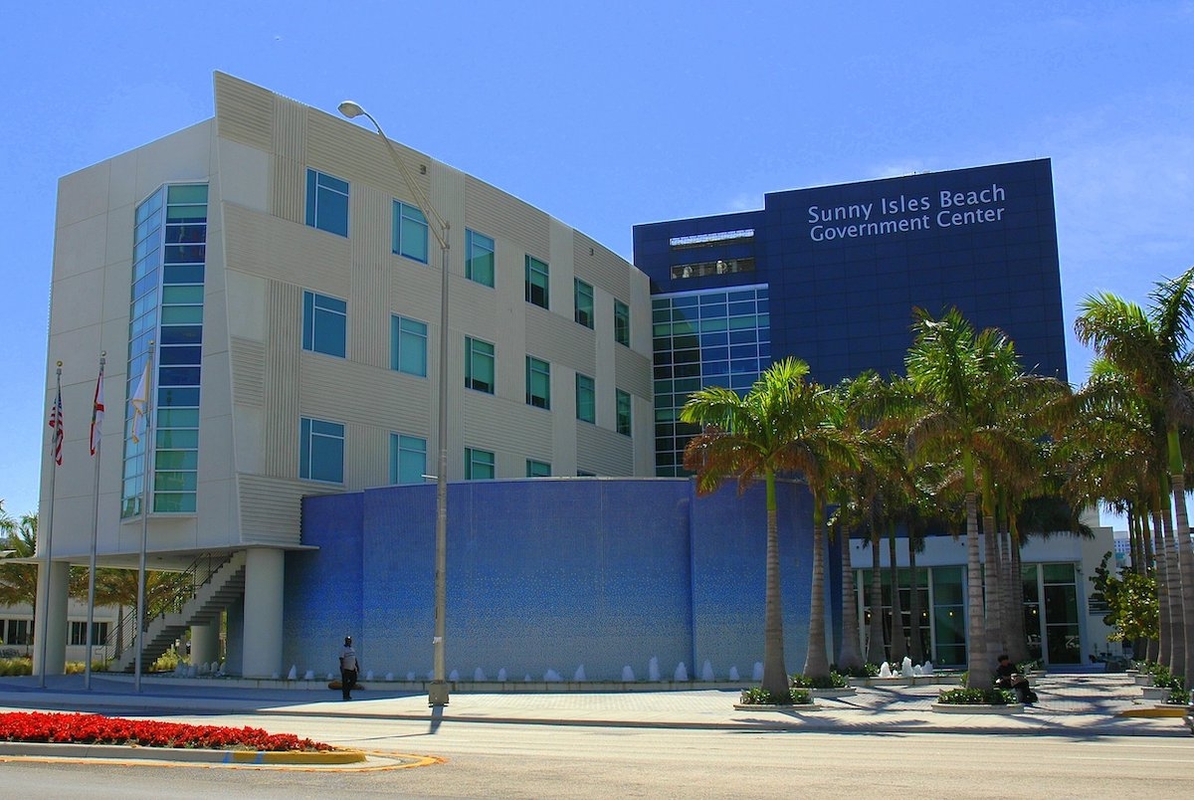 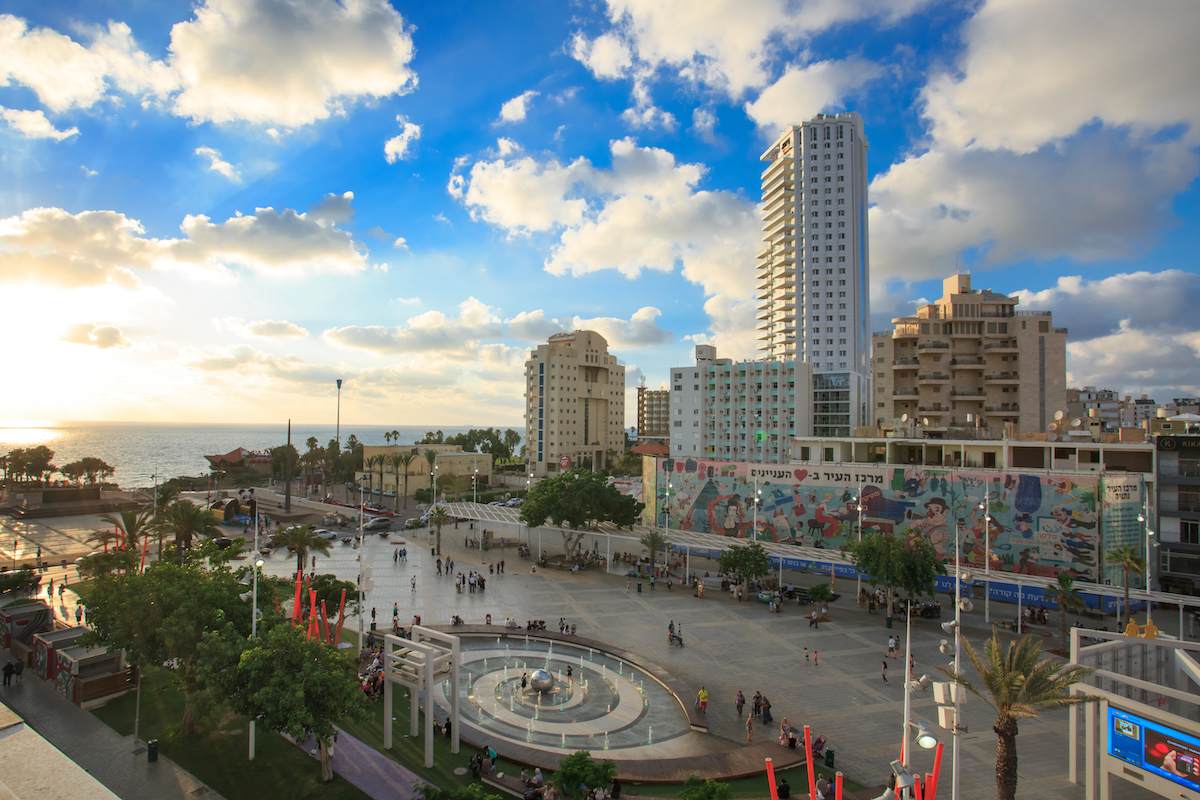 First Sister City Agreement Signed with Netanya, Israel - May 16, 2005
On May 19, 2005, the City of Sunny Isles Beach and the City of Netanya Israel formally became Sister Cities in an official signing ceremony. Netanya became the first Sister City to Sunny Isles Beach. The Sister Cities International Program encourages the exchange of culture, tourism, and commerce between the member cities. Since the first agreement, the City has signed 3 additional sister cities agreements including Taormina, Italy (2012); Hengchun, Taiwan (2013); and Punta del Este, Uruguay (2017). 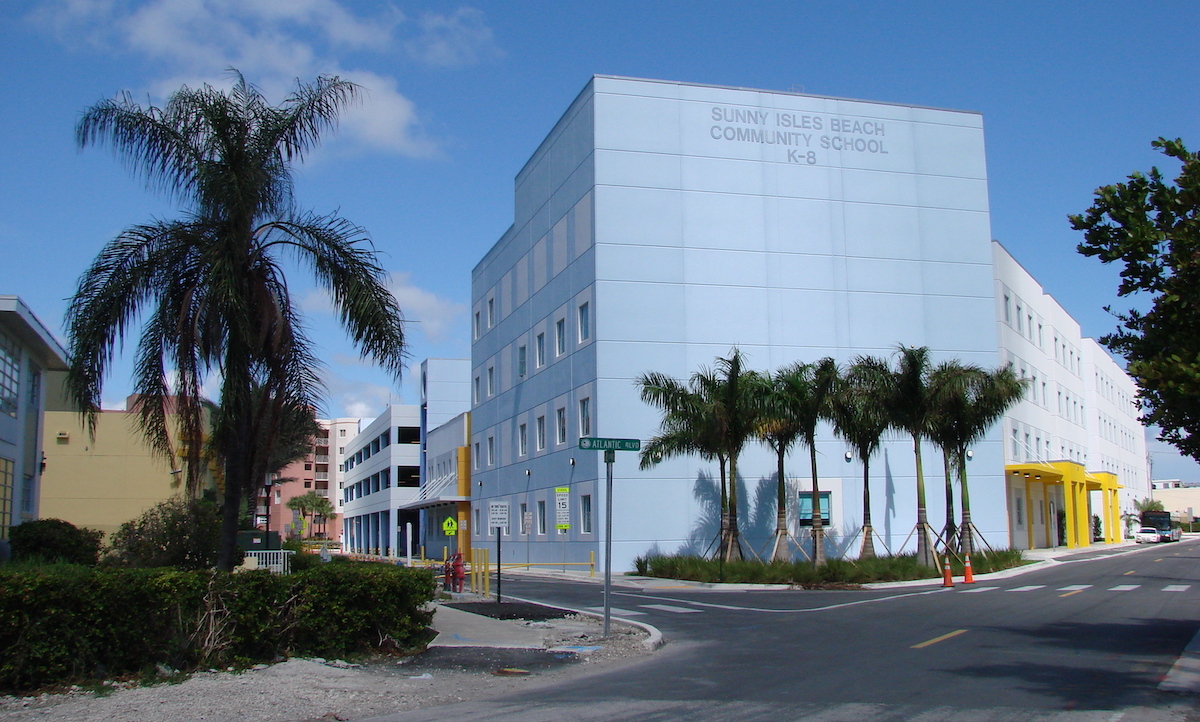 Norman S. Edelcup / Sunny Isles Beach K-8 School Opens - August 18, 2008
The Sunny Isles Beach K-8 Elementary School opens for the first day of school with facilities for 1,624 student stations. The school includes a four-story classroom building and two-story administration, media center and cafeteria/auditorium, and three levels of raised parking. The NSE SIB K-8 has been an A-rated school, as recognized by the State, since the school’s establishment. 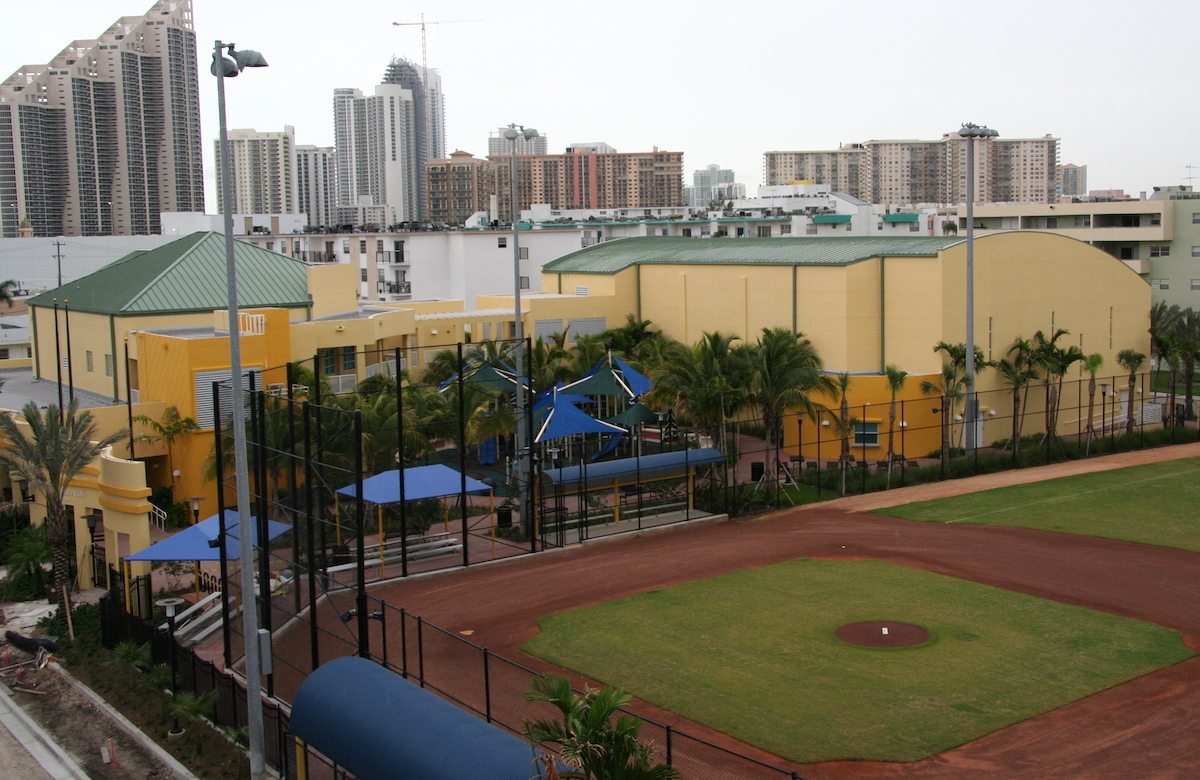 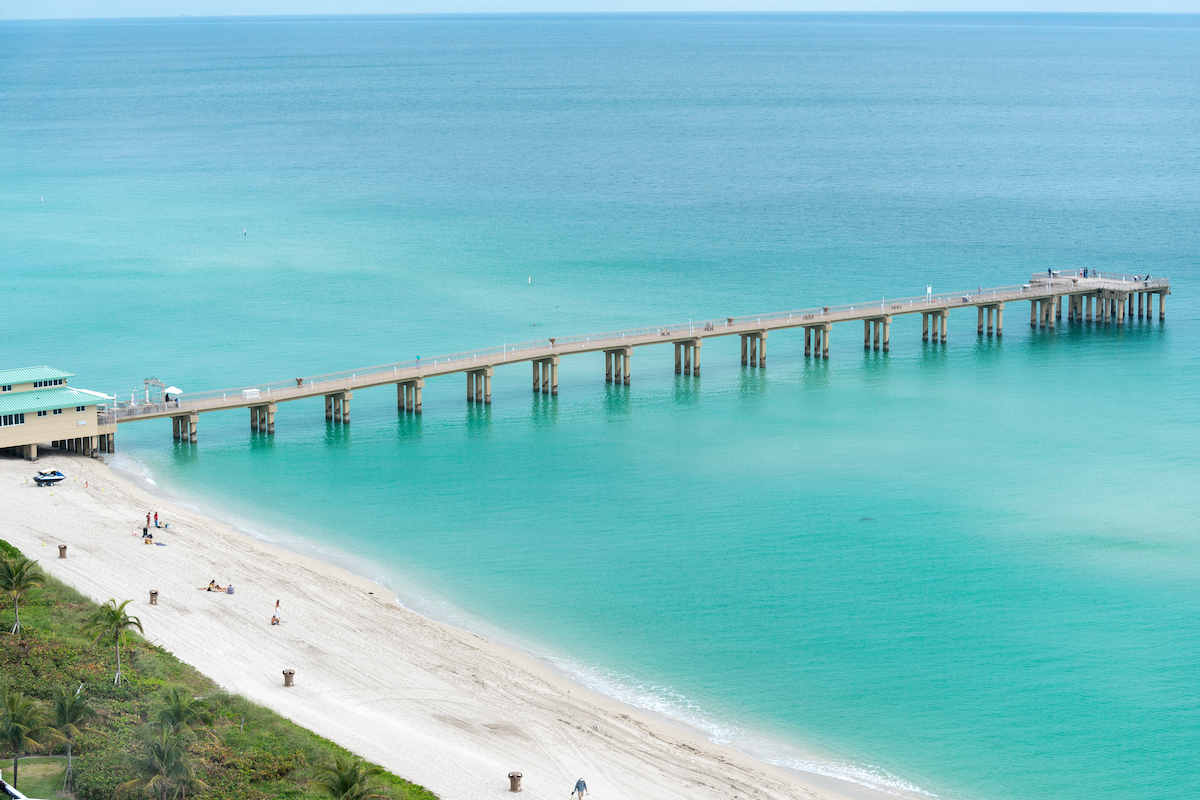 Newport Fishing Pier Reopens Following Renovations - June 16, 2013
On June 16, 2013, the Newport Fishing Pier reopened after being damaged by Hurricane Wilma in 2005. The half-mile long Pier was designated a historic site in 1982 and is currently one of only two piers in Miami-Dade County. The reconstruction of the pier was made possible by the formation of a partnership and the transfer of ownership of the pier from the Newport Beachside Resort to the City. The former owner of the pier, Dr. Robert Cornfeld, was involved in every step of the revitalization, including currently being involved in managing the fishing concession and tourist traffic on the new pier. 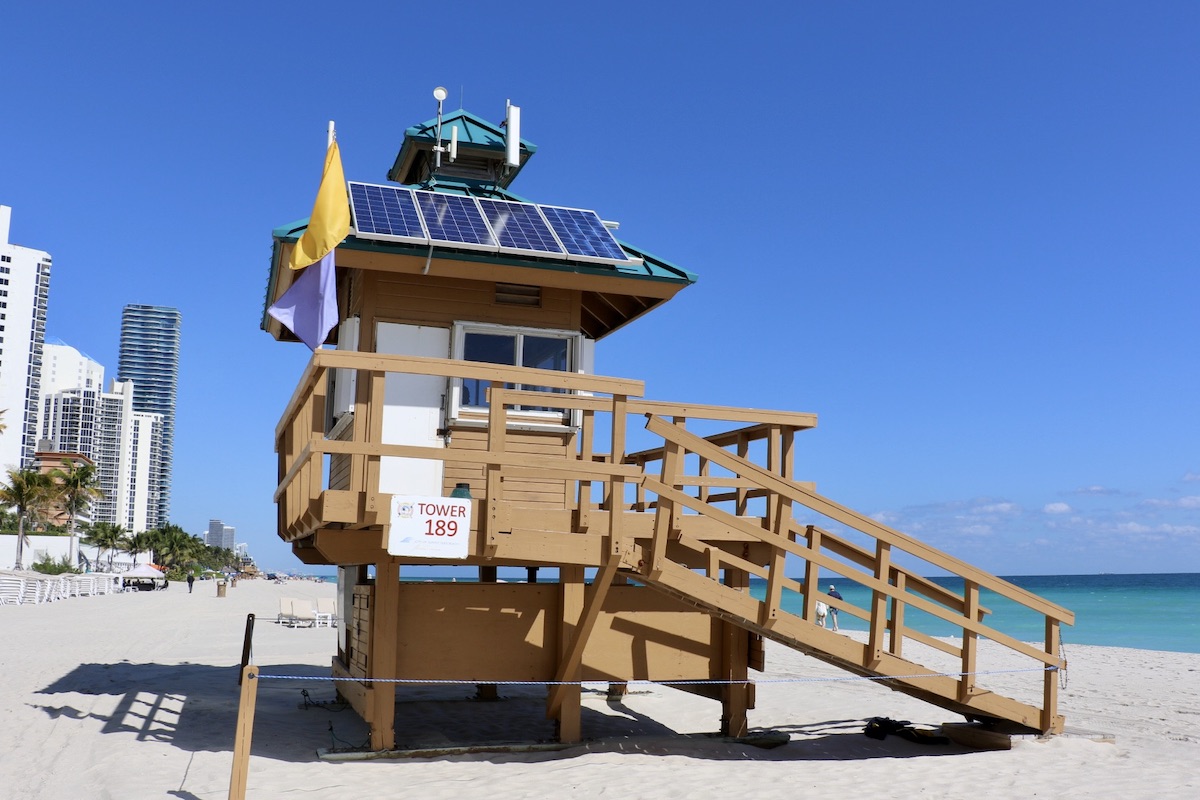 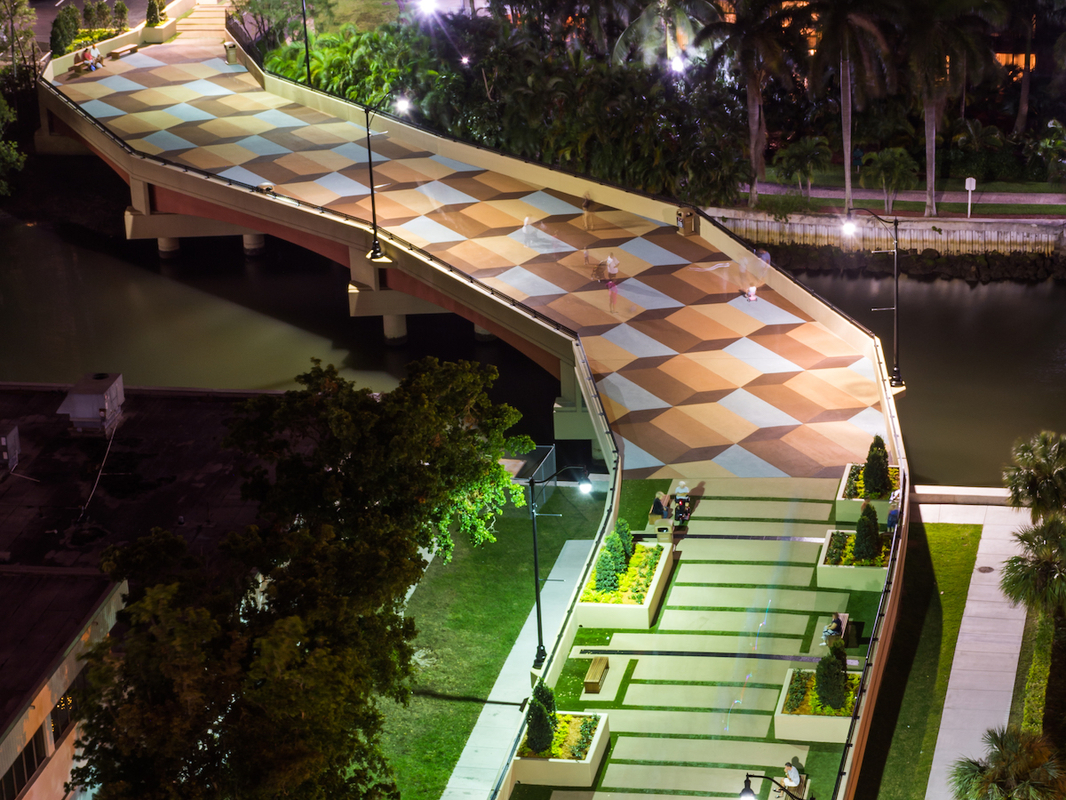 North Bay Road Pedestrian Bridge Opens to the Public - February 16, 2018
In 2016, the City commenced construction of an emergency/pedestrian bridge connecting North Bay Road from 172 – 174 Street. In November 2017, the bridge opened to the public tying together another interior route for pedestrians to traverse our City while avoiding Collins Avenue. This was a substantial enhancement to our City’s goal of improving pedestrian safety. 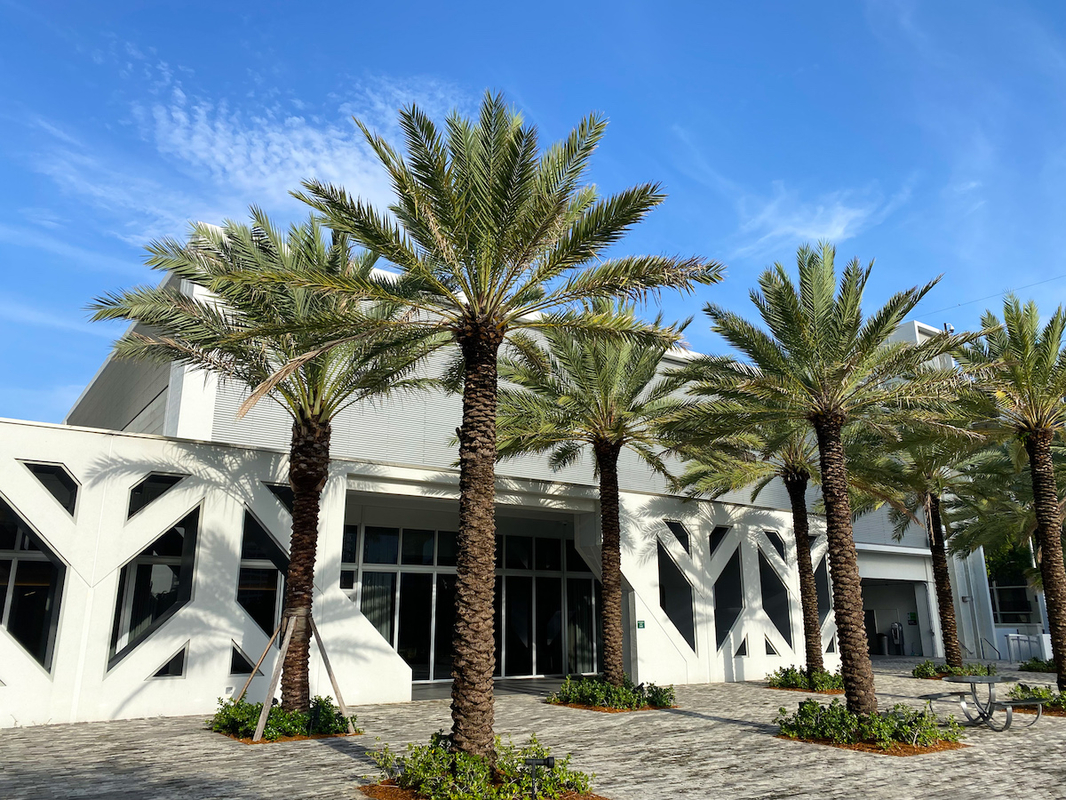 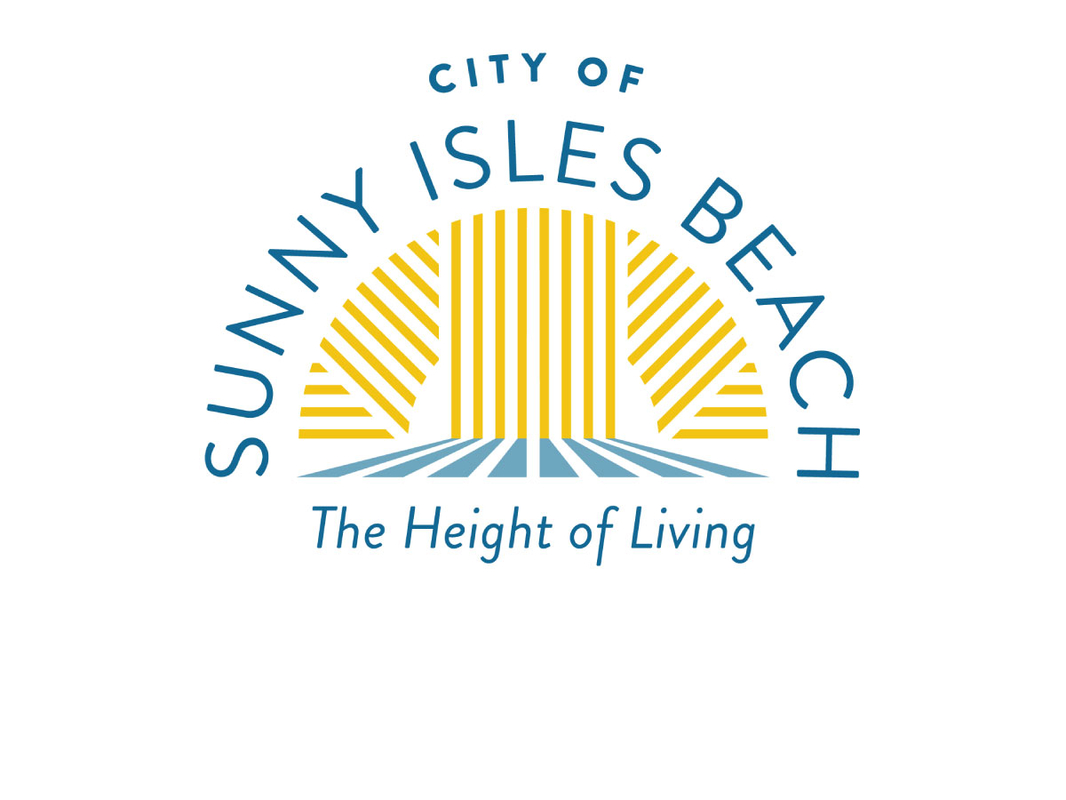 The City of Sunny Isles Beach Rebrands - October 18, 2021
After two years of extensive research to determine how to position the city to best represent our residents, businesses, and services, the City of Sunny Isles Beach launched its rebranding on October 18, 2021. During Phase 1, our consultant, Jacober Creative, conducted focus groups and surveys to gain resident feedback and input on how we can brand our city as a collective group. During Phase 2, Jacober Creative, took the findings from Phase 1, along with feedback from the Commission, to execute the City’s new brand. The rebranding project includes a new logo and tagline; brand colors and font; and vision statement, mission statement, and values.

History Hall is located on the first floor of the Government Center building. In 2009, City Historian, Richard C. Schulman, gathered pictures, old postcards of popular motels, and artificats for display and to tell the story of the history of Sunny Isles Beach. You may visit History Hall during normal hours of operation.