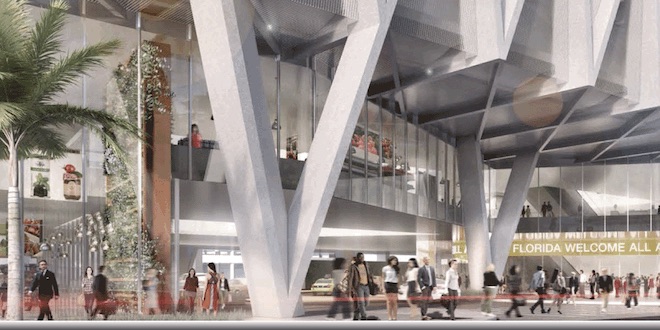 (Thursday, December 28, 2017) – All Aboard Florida, allaboardflorida.com, a division of Florida East Coast Industries, is building Brightline, gobrightline.com, an intercity express train service that will connect Miami, Fort Lauderdale and West Palm Beach with Orlando. This initiative, now in the final planning stages, is significant for a number of reasons and could ultimately have a positive impact on our community.

The tri-city infrastructure is almost complete. The Fort Lauderdale and West Palm Beach stations broke ground in 2014 and 2015 and are close to completion. The Miami station is scheduled to be completed by mid next year. Several Brightline trains have already been delivered and they have state-of-the-art conveniences such as free WiFi, power outlets, special engineering for a smooth and quiet ride and reserved seating through smart phones. They will pull into modern stations with connectivity to other transit options and ride-share infrastructure.

The Miami Central Station, miamicentral.com, spans over six downtown city blocks providing a true mixed-use urban experience. It will have a food hall, retail shops, over 800 rental residences, and urban office space, in addition to a major transit hub providing both local and multi-city transit options.

The exciting aspect of this initiative is that our region is already being discussed as a potential site for the next station, at 163rd Street and Biscayne Boulevard in northeast Miami-Dade. Having a clean, comfortable alternative that could take us to downtown Miami in 20 minutes, Fort Lauderdale in 20 minutes, West Palm Beach in 1 hour and eventually Orlando in 3 hours, is a real alternative to daily traffic and driving.

I have been discussing Brightline with the other Mayors from our surrounding communities and we are working on a strategy to demonstrate the strength of our potential regional ridership. Brightline is one of the few game changers in regional transportation to become a reality in decades – now we need to bring access to our region.