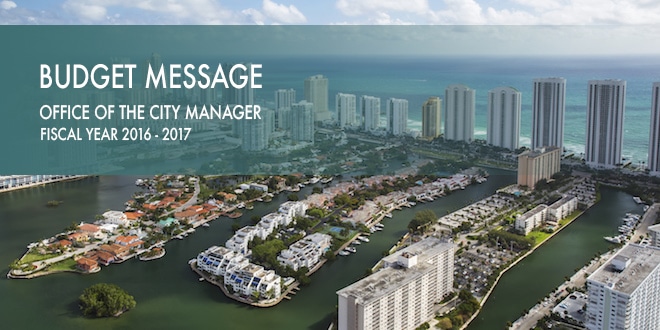 The 2016-17 Fiscal Year Budget represents the 20th Anniversary of our City and the Budget process. An interesting fact is the first Budget process started before the actual incorporation of Sunny Isles Beach, which we will celebrate in June of 2017. We have come a long way from that first Budget consisting of a few pages of financial data primarily focused on the transfer of revenues from the County to the City. Our total assessed value was $1.2 billion dollars. Today, on this anniversary, the City has exceeded $10.1 billion dollars in assessed value while reducing the millage rate for the fifth year in a row. We have grown in other ways too. Once we were known as a retirement bedroom community with inexpensive motels. We are now home for a burgeoning youth population and families. This Budget is representative of the needs of all residents and families in our City on this 20th Anniversary.

Following up on items mentioned last year that were being planned or just going out to bid: The City Government Center and School expansion has been put on hold temporarily pending further negotiations with the School Board and efforts to reduce overall costs of the project. The undergrounding of our utility distribution wires along Collins Ave. went out to bid as planned and work commenced in early April of this year.   The construction of the Pedestrian/Emergency Bridge from 174th Street to 172nd Street has commenced and is well underway. The renovations to Samson Oceanfront Park are expected to be completed by year’s end, as well as the reconstruction of 174th street pending any further delays caused by the private utilities, such as the gas company. Underway is the drainage improvement project on 172nd Street. The completion of Gateway Park has been extended through this calendar year. We are currently working with the proprietors of the market place at Gateway Park to commence their build out.

From an operating standpoint, we are raising the level of services and maintenance provided throughout the organization. We continue to enhance our highly regarded system of parks, together in the way of amenities, maintenance, safety, security and programming.

Again this year, the Budget provides for a reduction of the property tax rate, resulting in a millage rate of 2.4 mils per $1,000 of assessed value. This is achievable due to the 16.31% increase in our taxable value of all property within the City. It is important to note that this includes $820 million of property value increase and over $597 million of new construction added to the tax rolls in our City this year. Our City’s assessed property tax value will continue to increase over the next six to eight fiscal years as the new construction continues on a steady but somewhat slower pace than the previous few years. The City Commission decided on this tax rate reduction while maintaining sufficient funding to continue to improve our service delivery and complete our capital projects.

There are currently sixteen development projects approved, with nine of them under construction. There were also four projects completed which added 134 residential units and approximately 50,000 square feet of office space in the City. All these projects contribute to our increased revenue from such sources as Building Department fees, bonus payments, funds from Transferrable Development Rights (TDR), impact fees, and ultimately property tax revenue.

The largest significant increase is related to the property tax revenues. The City’s assessed value as reported by the Property Appraiser is $10,111,428,895. The recent history of the City’s Taxable Values is provided below:

The operating costs for the 2016-2017 Fiscal year will see the smallest increase in many years. This is due to the staffing levels reaching a plateau as opposed to past years where we have been growing staff, upgrading systems and software, and have made significant equipment purchases and improvements to properly handle the influx of families, development, and the goal of world class services and maintenance. I’m sure there will be a need for some adjustments along the way over the next several years as we complete capital projects, open all our Parks and look to fine tune and possibly add programming from various sources, especially the soon to be completed Cultural Master Plan Study.

Communications Services Tax revenues continue to decline due to legislative changes and decreased collections. The revenues from this source are estimated to be more than $100,000 less for fiscal year 2016-2017. In the intergovernmental revenue category, state revenue sharing is projected to increase $30,000 and local government half-cent sales tax projections are projected to increase only $5,000 over 2015-16. Charges for Services are projected to decrease $226,800 over 2015-16. This is primarily due to decreased parking revenues, and decreased cultural and recreational program collections.

Major revenue sources in the Street Maintenance and Construction Fund include intergovernmental revenues such as State Revenue Sharing, Transportation Surtax, and Local Option Gas Tax. This is the fourth year of this fund, which was developed for the benefit of segregating the uses of this revenue source. This fund accounts for the costs related to street construction and maintenance programs. The total budget is $3,091,897.

Major revenue sources in the Building Fund include fees generated from building permits and inspections. This fund was developed for the benefit of segregating the uses of this revenue source. This fund accounts for the costs related to the administration and enforcement of the Building Code. Revenue, not including appropriated fund balance, is $2,920,000, a decrease of $159,500 from the prior year.

This fund was created in 2014-2015 for the benefit of segregating the use of public art trust fund revenues to purchase and maintain art within the City.   The total budget is $566,278, an increase of $533,278 from the prior year.

Stormwater Capital Projects are funded by the Local Option Gas Tax and transfers in from the Stormwater Operating Fund.  Carryover funds from prior years are slated to be expended for the 174th Street Drainage Project, and accumulated fund balance will be utilized for other drainage projects in Golden Shores during fiscal year 2016-2017.

The Capital Improvement Program concentrates on the development of parks, infrastructure, and rehabilitation of our facilities including major road resurfacing, infrastructure upgrades, and expansion. A capital improvement project generally exceeds $25,000 and has a useful life of five years or more. The City has been successful in leveraging City dollars to obtain grant awards for some capital projects and will continue to seek grants where possible.

The City has one Capital Projects Fund: The General Capital Improvement Program Fund which is funded by a transfer from the General Fund, grants, impact fees, other development fees and contributions/donations.

The capital projects, which total $33,478,708, which includes $19,000,879 carryover from the 2015-2016 fiscal year, are recommended and funded by the General Capital Improvement Program Fund. The significant projects include $6.6 million for utility undergrounding on Collins Avenue, an additional $0.75 million for Gateway Park (bringing the total to be invested in the park to $24.75 million), and an additional $5.2 million for the pedestrian and emergency bridge. The remaining relate to development and improvements to other City parks.

The 2016-17 Fiscal Year Budget is a financial plan that will continue to provide our residents, families, and guests with a full scope of high quality municipal services, programs, special events, and safety that enhances life in our City. It also provides the required resources for us to complete all the great parks, facilities, infrastructure, and other amenities that make our community so desirable.

I would like to thank the Mayor and Commissioners for their vision and direction through this process and all the hard work of our Department Heads and staff. With the effective work of our Finance Department and that of each Department, the City is operating with a clear plan of maintaining fiscal strength and stability. This Budget will enable the City of Sunny Isles Beach to continue its quality of life as a thriving and safe community that cherishes its location, unites in its diversity and evolves to meet the continuous challenges that success brings.