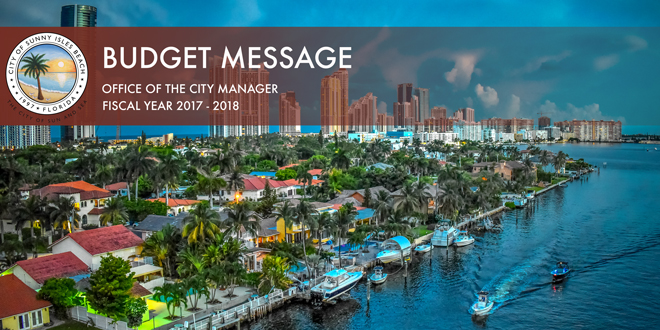 (October 3, 2017) – In Accordance with Article IV Section 4.5 of the Charter of the City of Sunny Isles Beach, It is my honor and privilege to submit the Proposed Budget for fiscal year 2017-2018.

The filing of the 2017-18 Fiscal Year Budget represents my eleventh year presenting the Budget as your City Manager. We have now reached $11 billion dollars in assessed value while reducing the millage rate for the sixth year in a row to 2.3 mils per $1,000 of assessed value. In fact, for the first time in the history of our City we have proposed a tax rate below the roll back rate. This is rare in that our commitment has been, as long as we have growth in our tax base, to continue to give back a portion of the increase in revenue to our taxpayers. The rest is split between operating expenses, capital projects, and reserves.

We just completed our 20th Anniversary celebration, and with it came the completion of a number of capital projects, including the rehabilitation of 174th street, the 172nd street drainage project, Samson Oceanfront Park makeover, the first phase of the Collins Avenue utility undergrounding, and the opening of Gateway Park and the Gateway Park pedestrian bridge over Sunny Isles Boulevard. Ongoing projects include the finishing touches to Gateway Park and the final resolution to the use of the interior space.

Our pending agenda of projects are many and challenging. The City Government Center and School Expansion remains on hold while the School Board implements the Address Verification Program, the agreement for which was entered into on January 9, 2017. The process of weeding out students fraudulently enrolled in our School got started late into the school year, and is ongoing. The first status report was submitted at the end of June 2017. Once we have a full year of results the City Commission will re-evaluate this project.

The undergrounding of our utility distribution wires along Collins Avenue went out to bid as planned and work commenced in early April of 2016.   The City completed its first phase, which involved the installation of conduits under Collins Avenue, this past spring in anticipation of the State Department of Transportation (FDOT) starting the milling and paving of Collins Avenue at the end of June 2017. Unfortunately, FDOT decided to delay the start until the end of the calendar year. Therefore the City has been working to improve the temporary trench patchwork, which our undergrounding project has caused on Collins Avenue.

The construction of the Pedestrian/Emergency Bridge from 174th Street to 172nd Street will be substantially completed and opened by the end of this calendar year. We are currently working to obtain the necessary easement to commence planning and construction of our first pedestrian bridge over Collins Avenue at 174th Street to Samson Oceanfront Park. We are also planning for a second bridge over Collins at the Government Center in the future. To that end, we have been awarded a $500,000 grant from the State Transportation Alternatives Program (TAP). This funding is targeted for a commencement date once the City completes the Government Center expansion project, which is estimated to be three years away.

We will start the next Fiscal Year staffed to almost 95% in service delivery areas. In order to better serve our residents and continue the goal of being a World Class City, this Budget restores the position of Assistant City Manager, which will have direct oversight of three very important areas; Public Works, Capital Projects, and Cultural and Community Services.

Again this year, the Budget provides for a reduction of the property tax rate, resulting in a millage rate of 2.3 mils per $1,000 of assessed value.  This is achievable due to the 11.33% increase in our taxable value of all property within the City.  It is important to note that this includes $330 million of property value increase and over $798 million of new construction added to the tax rolls in our City this year.  Our City’s assessed property tax value will continue to increase over the next five to seven fiscal years as the new construction continues on a steady but somewhat slower pace than the previous few years.  The City Commission decided on this tax rate reduction while maintaining sufficient funding to continue to improve our service delivery and complete our capital projects.

There are currently twenty development projects approved, with nine of them under construction. There were also four projects completed which added 405 residential units in the City. All these projects contribute to our increased revenue from such sources as Building Department fees, bonus payments, funds from Transferrable Development Rights (TDR), impact fees, and ultimately property tax revenue.

The largest significant increase is related to the property tax revenues.  The City’s assessed value as reported by the Property Appraiser is $11,097,893,299.  The recent history of the City’s Taxable Values is provided below:

Major revenue sources in the Street Maintenance and Construction Fund include intergovernmental revenues such as State Revenue Sharing, Transportation Surtax, and Local Option Gas Tax.  This is the fifth year of this fund, which was developed for the benefit of segregating the uses of this revenue source.  This fund accounts for the costs related to street construction and maintenance programs.  The total budget is $3,475,906.

Major revenue sources in the Building Fund include fees generated from building permits and inspections.  This fund was developed for the benefit of segregating the uses of this revenue source.  This fund accounts for the costs related to the administration and enforcement of the Building Code.  Revenue, not including appropriated fund balance, is $2,620,800, a decrease of $299,200 from the prior year.

This fund was created in 2014-2015 for the benefit of segregating the use of public art trust fund revenues to purchase and maintain art within the City.   The total budget is $284,549 a decrease of $281,729 from the prior year.

Stormwater Capital Projects are funded by the Local Option Gas Tax and transfers in from the Stormwater Operating Fund as available.    Accumulated fund balance (carryover) will be utilized for drainage projects in the city during fiscal year 2017-2018.

The Capital Improvement Program concentrates on the development of parks, infrastructure, and rehabilitation of our facilities including major road resurfacing, infrastructure upgrades, and expansion.  A capital improvement project generally exceeds $25,000 and has a useful life of five years or more.  The City has been successful in leveraging City dollars to obtain grant awards for some capital projects and will continue to seek grants where possible.

The City has one Capital Projects Fund: The General Capital Improvement Program Fund, which is funded by a transfer from the General Fund, grants, impact fees, other development fees and contributions/donations.

The capital projects, which total $19,507 840 (including $15,807,840 carryover from the 2016-2017 fiscal year) are recommended and funded by the General Capital Improvement Program Fund. The significant projects include $1.25 million for the interior build out of Gateway Park, and $1.4 million for transportation improvements. The remaining relate to development and improvements to other City parks.

The 2017-18 Fiscal Year Budget is a financial plan which will continue to provide our residents, families, and guests with a full scope of high quality municipal services, especially our remarkable public safety throughout the City and particularly in keeping our children safe. Our programs, special events, and safety enhance life in our City. It also provides the required resources for us to complete all the great parks, facilities, infrastructure, and other amenities that make our community so desirable.

Once again I would like to say thank you to our Mayor and Commissioners for their vision and direction through this process and all the hard work of our Department Heads and staff. With the effective work of our Finance Department and that of each Department, the City is operating with a clear plan of maintaining fiscal strength and stability. This Budget will enable the City of Sunny Isles Beach to continue its quality of life as a thriving and safe community that cherishes its location, unites in its diversity and evolves to meet the continuous challenges that success brings.