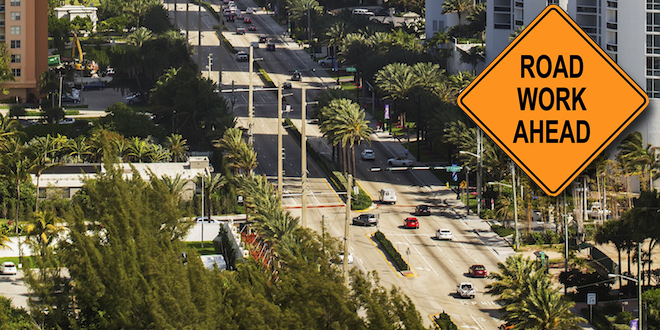 Lane Closures: What They Are For, Who Approves Them, & When They Take Place

(Sunday, April 29, 2018) – With the Florida Department of Transportation now in complete control of the work being done on Collins Avenue and extended, in some cases, about 100 feet into local roads, I thought it important to notify all residents directly with some information about lane closures on our roadways, what they are for, who approves them, and why some of them are during the day and others take place overnight.

A lane closure is generally for three purposes: 1.) work being conducted by the Florida Department of Transportation (FDOT) on State roads in our City, as they are doing now; 2.) work being conducted by the City of Sunny Isles Beach on either City-owned roads or on State roads for a City project, such as the utility undergrounding along Collins; and 3.) property development that requires construction activities such as concrete pours, material deliveries, utility connections, and crane assembly.

Lane closures on State roads in our City, which include Collins Ave., Sunny Isles Blvd., and the William Lehman Causeway, are approved and controlled by the Florida Department of Transportation. Our City, through our staff, professional consultant, and police department, get involved in the interest of safety and coordination to mitigate the amount of inconvenience to the greatest degree possible, realizing that we do not control these roads. This always includes our urging that the State secure a special police detail, filled by off-duty police officers.

All other lane closures on City roads are approved and controlled by our City government. The City always includes the added condition of a police detail at lane closures under our control. Having the police at these lane closures is a matter of life safety.

Speaking of life safety, the U.S. Department of Transportation has reported that 41 percent of fatalities at lane closure work zones are caused by rear-end vehicular accidents. Routinely, there is at least one officer in a police vehicle with official flashing lights in the rear of a lane closure to give oncoming vehicles the most warning possible. That officer is there to save lives while risking his or her own to prevent injury and loss of life. In many situations, depending on the complexity of the work, there may be additional officers and vehicles throughout the work zone. Safety is the first priority, but our police department does not stop there; if the situation provides them the opportunity to shorten any delays caused by traffic, they will accommodate. Our police department has a 20-year record of going above and beyond for everyone who enters our City.

Overnight lane closures are for more complex projects that include lane diversions or multiple lane closures such as sewer and water connections to new developments on Sunny Isles Blvd., which extend into the second traffic lane.

Daytime lane closures are usually on State roads in our City, most often Collins Ave. and typically conducted by the Florida Department of Transportation. Some daytime lane closures may be for a City project of short duration, a lengthy concrete pour, or for safety of a certain activity taking place on a development project.

We understand that traffic and congestion are frustrating and inconvenient; please realize that as each of these projects are completed, our City is going to be more sustainable and beautiful than ever.

Please see the short video about lane closures posted above and on our social media, and watch for email blasts and website notices for further information concerning lane closures and projects that impact you.