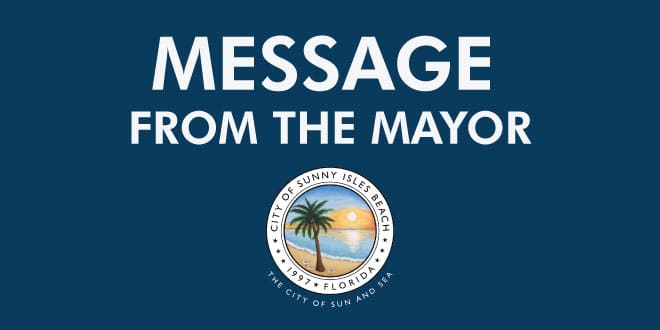 IMPORTANT: Message from the Mayor regarding proposed Comprehensive Plan Amendment

I would like to address an open letter to residents, which was recently circulated by Raanan Katz, the owner of a majority of commercial retail property (RK Centers) in our city and a part-time resident. I do not typically respond to these types of allegations, but I believe our residents must know the facts. The letter made a series of false and misleading statements intended to cause alarm to our citizens regarding technical clarifications being proposed by our planning and legal experts to the City’s Comprehensive Plan. The letter also references an article that recently appeared from Community Newspapers that interviewed only opponents to the City and never contacted the City for actual information. If the newspaper had contacted the City, it would have learned the City MUST make these clarifications in order to comply with state law. This vote is on that change, and NOT – let me reiterate – NOT on the project Mr. Katz and others oppose.

In 2004, under former Mayor Edelcup, the City of Sunny Isles Beach adopted certain land use regulations designed with the intention of encouraging development in certain areas of the city on the west side of Collins Avenue known as the Town Center. The Town Center Plan gave west side property owners certain development rights that were not available in our original comprehensive land use plan. Since that time, there were 13 approvals granted under the Town Center Plan, most of which occurred under former Mayor Edelcup. Over the past 18 months, a developer approached the City to seek approval under the Town Center Plan to construct a building adjacent to one of Mr. Katz’s shopping centers. Mr. Katz, who had no opposition to the prior 13 approvals, opposes this development and has thrown his considerable legal and economic resources behind challenging this development and the interpretation of the City’s Town Center Plan. When the time comes to review this project or any other project, we will review it on its own merits.

This opposition put a tremendous amount of scrutiny on the Town Center Plan. As a result, our city’s planning and legal experts have discovered a portion of the plan that should be clarified to remain consistent with the 13 approvals that have already been granted. Mr. Katz is fighting this, as are some residents of other properties near the proposed development because he believes the proposed development will have a detrimental effect on his shopping center. This challenge is even more ironic because our former City Attorney, Hans Ottinot, who advised the City as to the legal sufficiency of 12 out of the 13 formal approvals under the Town Center Plan, now works for Mr. Katz. Additionally, when the Town Center Plan was first being developed under former Mayor Edelcup, Mr. Katz came to the public meetings and argued for the maximum allowances he could receive at that time given the Town Center Plan would benefit portions of his properties.

With the above in mind, I urge you to not be swayed by the sensationalistic misinformation that Mr. Katz and other nearby property owners are spreading to protect their own economic interests at the expense of their neighbors’ vested property rights. No one likes when a new development is in the process of approval or being built, especially close to their own business or home. Our natural reaction is typically to attempt to stop development. However, the buildings each of us live in were developed at some point and likely created some perception of a detrimental effect on an adjacent property owner. As your elected officials, we must create balance between the desires of our residents to mitigate development with the need to protect property rights under the rules and regulations that have been established. In this instance, a billionaire commercial property owner, Mr. Katz, is putting his formidable amount of legal and financial resources to change the property rights of others that do not suit his own economic interests. Please evaluate these types of issues carefully, because at some time, those formidable legal and financial resources could be directed at your property rights. I hope this provides a bit more clarity into the fact trail behind this issue. Should you have any questions, please do not hesitate to contact me. Thank you for reading this message.