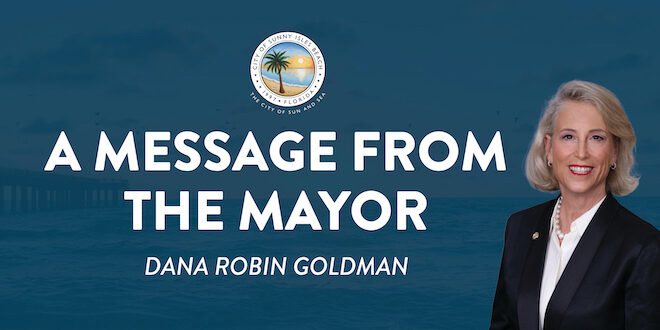 Message from the Mayor: Update on Pedestrian Safety Initiatives

As you know, pedestrian traffic safety is a top priority of mine. As I complete my first two months as mayor, I want to share some exciting new developments in keeping pedestrians safe. This includes greatly enhanced police traffic enforcement, a new resident-driven pedestrian safety advisory committee, and lower speed limits and “scramble” crosswalks on Collins Avenue and Sunny Isles Boulevard.

Our Police Department came out strong at the start of the year, stepping up its traffic enforcement patrols considerably. Our PD added two more dedicated uniform patrol traffic units. This specialized division focuses exclusively on enforcing traffic violations. I salute these dedicated officers who are making our city safer and more livable.

At the last City Commission meeting, we formally established and appointed five members to, the newly formed Mobility and Pedestrian Safety Advisory Committee (MAPSAC). This citizen advisory committee will explore ways to make it safer to walk, jog and bike in our city, and then make recommendations to the City Commission. On Tuesday, the chair of this resident-focused committee, Pavel Stoev, met with City Clerk Mauricio Betancur to complete his orientation and discuss the format for the first meeting. The two recommended that the first meeting should be a joint workshop between the MAPSAC and the City Commission to establish priorities.

Also on Tuesday, I had an extremely productive meeting with Stacy Miller, District VI Secretary for Florida Department of Transportation (FDOT), to discuss ways to make Collins Avenue and Sunny Isles Boulevard safer for pedestrians.

As you probably know, both are state roads under FDOT’s jurisdiction. You also have probably heard for years that we can’t make any changes because FDOT just won’t let us. I am happy to report that during my meeting with Ms. Miller, along with the City Manager’s Office, she displayed a genuine interest in assisting us in taming these two monster roads.

Last year, when I was a city commissioner, I championed reducing the speed limit as one tactic to work in tandem with other solutions to make our roadways safer. Now, as your mayor I am working with FDOT to reduce the speed limit to 30 mph. The first step in this process is a speed study, which FDOT requires in order to do this. To expedite this, our city can conduct this study instead of FDOT. As such, City Manager Stan Morris is now busy securing a highly-qualified traffic engineering consultant to conduct it for us.

Ms. Miller was also supportive of installing “scramble” crosswalks at select intersections where they would provide the most benefit to pedestrians. These intersections would have longer traffic light settings, and no turns on red allowed, so pedestrians have the exclusive right of way to cross safely — including diagonally from one corner to another.

Going forward, we continue working on both short- and long-term plans to keep pedestrians safe. In the shorter term, we will begin showing progress on streets controlled by our city or county, making them more walkable and aesthetically pleasing.

Longer-term, we will concentrate on much more substantive improvements to Collins Avenue and Sunny Isles Boulevard, from both a safety and aesthetic perspective. But these improvements will take time, maybe even a few years.

Dana Robin Goldman was elected Mayor after winning a Special Election on November 16, 2021.

2022 State of the City Address

Read the Mayor's 2022 State of the City Address

Read past State of the City Addresses