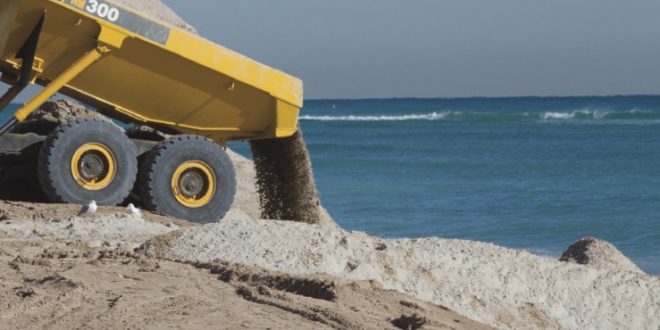 (Friday, July 31, 2015) – Where is all our beach sand going? Experts tell us our beach sand migrates south at the rate of one mile per year. The result is some steady erosion that we have been attempting to find ways to mitigate for years. This is an issue for our community because where would we be without the Beach in Sunny Isles Beach! Aside from being the major economic driver for our region, our beach also provides protection against storm surge from tropical weather events.

Our beach is a public beach, open to everyone. It is actually owned by the State of Florida and managed by Miami-Dade County. With tighter budgets and reduced emphasis on assisting municipalities such as ours, we realized the need to bring a heightened sense of awareness of this issue to our county and state governments.

Following the old adage, “strength in numbers,” we decided to team up with neighboring coastal communities to form an alliance named the South Florida Mayors’ Beach Alliance (SFMBA). Every Mayor of every beach community in Miami-Dade County has agreed to become SFMBA members. These communities are Golden Beach, Sunny Isles Beach, Bal Harbour, Surfside, Miami Beach and Key Biscayne which together represent over $52 billion in property values. SFMBA held a press conference on the beach that was widely covered by the media and resulted in several newscasts and newspaper articles. This prompted calls from key county officials pledging support for getting beach nourishment funding back into the county budget for the coming year.

Nothing has been approved yet but our “strength in numbers” approach certainly was effective in raising awareness with key decision makers. Our ultimate goal will be to identify a recurring funding source which can be set aside for future nourishment needs. So, we know where our sand is going, we just need to ensure that we can get some of it back on our beaches!