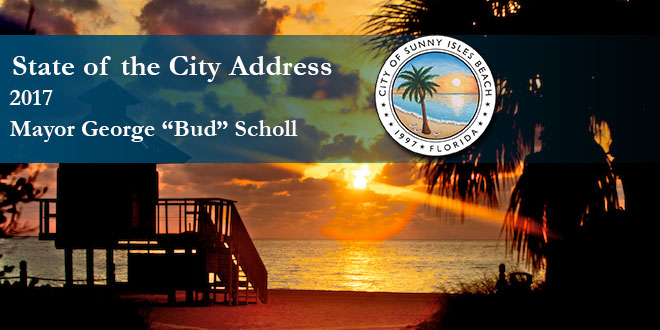 (January 19, 2017 ) – Citizens of Sunny Isles Beach, as we enter the year marking the 20th anniversary of the formation of our City, I am pleased to present the 2017 State of the City address. As I have pointed out in the past, your Elected Officials have tremendous gratitude for the day in and day out efforts of our City staff. There is a lot of work that goes into managing a City such as ours and we have a dedicated team of professionals throughout the various departments that ensure our City runs efficiently and responsively to the needs of our residents.

Our City continues to evolve. What started out as a resident population largely composed of retirees, we now have an abundance of families with young children. This is highly evident most evenings when passing by any of our parks; playgrounds are filled. We now have a variety of cultures and languages with residents from throughout the US, South America, Europe, Eastern Europe, Canada, and the Middle East. Whether our residents live full time or part time, this cultural diversity is one of the most prominent and defining features of our City’s identity.

One of the most important aspects of maintaining our quality of life, is our continued ability to maintain our financial stability. This past year was no exception. For the fifth year in a row we have reduced our millage rate, thereby easing the property tax burden for all property owners within our City. During the past year, our collective assessed real estate value officially exceeded the $10 billion mark. This demonstrates the incredible value creation that has been experienced by our property owners since the formation of our City 20 years ago. The assessed amount of our collective property values was $1.2 billion the year the City was formed. The current valuation represents a 742% increase over the life of our City. This extraordinary tax base ensures we can continue to support the three critical areas of our City finances. Area one, a general operating budget to maintain high quality levels of service. Area two, maintaining proper levels of funding to complete our current and future capital project needs. And area three, maintaining a considerable level of general and assigned reserves, also known as our rainy-day fund.

We had another great year of activities and events that were planned and presented by our Cultural and Community Services Department. We experienced the highest attended Sunny Isles Beach Jazz Festival in over five years. Continuing our commitment to our senior population, the City committed funding to support programs at Marian Towers, a senior residential complex located near the center of the City that provides health, educational and social programs to hundreds of seniors. Perhaps one of the most important aspects for the future of our community events in the City’s history was last year’s completion of our City’s Cultural Master Plan. With the assistance of the Sunny Isles Beach Foundation, the plan was created by a professional consulting firm with the input of many of our residents through a series of workshops, surveys and interviews. Five goals were determined which included bonding our community through inclusive and accessible events, leveraging arts and culture for creative placemaking, focusing on family and children in cultural programming, expanding upon existing successful programs, and supporting arts and culture with required infrastructure. The over 100 page plan has a multitude of initiatives and strategies for achieving its vision and five key goals. Our City staff will be utilizing this plan to ensure that we continue to develop programming that will appeal to our diverse residents, improving the quality of life in our City.

On Thanksgiving Day, after nearly three years of construction, Gateway Park was officially open to the public. The 5 acre park has a 366 space parking garage, playground, water feature, butterfly garden and professional performance stage. Gateway is one of our largest City parks and certainly one of the most grand with a great lawn and unique landscape architecture. To assure safe passage to the park, our first pedestrian bridge was hoisted into place over west bound Sunny Isles Boulevard. The two towers supporting the bridge are being completed and it is anticipated the pedestrian bridge will be open by April, 2017. During the year, we successfully relocated the skate park that was previously located at Town Center Park to Haulover Beach Park. This was completed with the cooperation of Miami-Dade County and the Florida Department of Transportation. Samson Oceanfront park is nearing the completion of a complete remodeling and overhaul. Work has been ongoing since January 2016 with an estimated reopening this spring.

South Florida made world news due to the detection of the Zika virus. Fortunately our City staff was proactively engaged in preventative measures long before Zika became a widespread concern. Our Building, Code and Public Works Departments concentrated on the citywide removal of standing water and the treatment with anti-mosquito larvicide of standing water that could not be eliminated. During mosquito season, we also hired an outside firm to regularly fog our streets and parks utilizing an environmentally friendly method. The above actions substantially mitigated the decreases in tourism that our neighboring community Miami Beach suffered due to extensive news coverage of the Zika virus.

On October 6th, 2016 Hurricane Matthew, the first category five hurricane to form in nine years, threatened landfall on the east coast of southern Florida. Our City and residents prepared for what could have become a significant event causing widespread damage. Fortunately we were spared from the worst effects of the storm and only experienced a day of windy and rainy weather. However all of us were reminded that living in a barrier island community always requires vigilance and preparation when facing a tropical storm.

The completion of our Transportation Master Plan gave us a greater understanding of what is generating the traffic on our major arteries and provided us with some key initiatives for mitigating traffic and increasing pedestrian safety. Pedestrian bridges will provide better, safer crossing for our walkers while alleviating congestion on the most heavily travelled intersections. This concept has also been endorsed by the Florida Department of Transportation, the governing agency of our main arteries. The real-time computer synchronization of traffic signals was another outcome of our study. We are currently in discussion with county transportation officials to determine a timeline and cost for initiating this technology. While it is not feasible to increase the size of our roads, we do have some innovative initiatives to process our traffic more efficiently and provide safer passage for our pedestrians.

One of our busiest interior streets, 174th Street, was completely renovated this past year. New drainage, new landscaping, widened sidewalks, upgraded utilities and lighting are now being enjoyed by residents of one of the most travelled areas of our City. Also adjacent to 174th Street, we commenced construction of the emergency / pedestrian bridge connecting either side of North Bay Road. When completed we will have tied together another interior route for avoiding the need to walk or bike along Collins Avenue, a substantial improvement to pedestrian safety.

A multi-year project that will beautify Collins Avenue and mitigate issues due to downed powerlines, the utility undergrounding project commenced in 2016. The project is ahead of schedule with the road work excavation and conduit installation, the first phase of this multi-year project, due to be completed in 2017. In addition to creating a significantly improved utility infrastructure, this project will also bring us improved lighting and new light posts along Collins Avenue.

2016 saw the completion of two of the Mayor’s technology initiatives, as well as the final design and planning of two additional initiatives that are now in the process of being implemented. Sunny Isles Beach was the first city in Florida to deploy Soofa smart benches. These benches feature solar-powered charging stations for mobile electronic devices, as well as providing the City information about their utilization. There are currently ten benches deployed across the City at various parks. The implementation of the SIB Shuttle mobile application allows for real-time tracking of the City’s shuttle buses, finding the estimated time of arrival (ETA) to any shuttle bus stop, and finding route information. This information is also available through a telephone number and over the web.

Dr. Annette Weissman, the founding principal of our K through 8 community school, retired in 2016. Dr. Weissman has provided our community with an A rated school for every year since its inception. We thank her for her dedication and leadership. After a comprehensive search process, Dr. Adam Kosnitzky was awarded the position of principal to replace Dr. Weissman. Dr. Kosnitzky is halfway through his first school year and has been doing a great job. We also were finally able to complete an agreement with the Miami Dade County Public School Board to initiate an Address Verification Program. Our community school is overcrowded and the Commission decided that before supporting a school expansion initiative, we must determine the extent of the ‘out of district’ students in attendance. The Address Verification Program will be initiated this year whereby every student in the school will be verified as to whether they actually live within our community schools’ boundaries.

In 2016 our Police Department continued to keep our community safe and secure. Our officers successfully arrested multiple suspects who on three separate occasions tried to rob vulnerable persons on the beach at night. All incidents ended with the capture and arrests of the suspects, recovery of the stolen property from the victims and no injuries sustained to officers or victims or suspects. Daily, throughout the school year, our police managed the school traffic for 2016 despite the growing number of vehicles and pedestrians in the area. Our Police Department continues to be an agency leader in Community Policing and by assisting the less fortunate in our City as well as participating in programs involving the youth and young adults of our City.

We have three Sister Cities; Taormina, Italy, Netanya, Israel and Hengchun, Taiwan. We commenced the process of creating a Sister City alliance with Punta del Este, Uruguay which would be our first Sister City in Latin America. In 2016 we initiated a Sister City Internship Program and welcomed our first intern, Erika Raneri, from Taormina, Sicily. Erika is an

architect and engineer who has been working throughout the various departments of the City to gain experience which she will bring back to our Sister City Taormina.

The mayor and commission terms are staggered to ensure that we always have continuity with at least two members of the commission maintaining their seats during an election year. In addition to a surprise presidential election outcome, on November 8th, 2016 our citizens reelected incumbent, Dana Goldman, and newly elected Commissioner, Larisa Svechin. During the December Commission meeting Dana was also voted by her peers to become our City’s next Vice Mayor. The next municipal election will be in November of 2018.

Development activity remained robust in 2016. A number of new projects broke ground such as the Ritz Carlton residences, the Armani Casa, the Turnberry Ocean Club, the Residence Inn by Marriott, and Parque Towers. Projects nearing completion include Jade Signature, the Muse and the Porsche Design Tower. 400 Sunny Isles Marina was completed this year.

It is a great privilege to serve as your Mayor in such a dynamic and diverse community. I would like to thank all my colleagues on the City Commission, past and present, for their dedicated service and the loyal staff of professionals that assure our City runs efficiently to serve the needs of our residents. We have a legion of volunteers from our residents and students that provide a lot of energy and support to most of the activities and initiatives we all enjoy throughout the year. I also want to thank them for their ongoing service to our community. 2016 has been another banner year for our City, but make no mistake there are still great things on the horizon. Thank you and may god bless you.