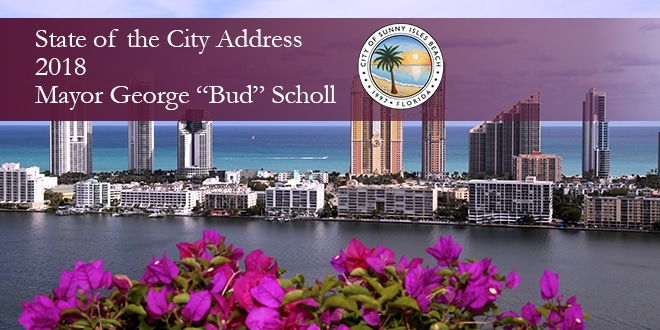 (Wednesday, January 31, 2018) – Citizens of Sunny Isles Beach, as we complete the 20th year since the formation of our City, I am pleased to present the 2018 State of the City address. Much was accomplished this past year and without the tireless efforts of our City Staff, none of it would have been possible. I know I speak for the entire Commission and community in thanking everyone who works to support our City for their dedication and professionalism.

We had two very significant events occur in 2017: one that gave us only a few days’ notice and one that took years of planning. In early September we were facing the possibility of a devastating Category 5 hurricane making landfall in South Florida. At the zero hour, the storm, Hurricane Irma, stayed on a slightly greater western trajectory and our City was spared the worst of the impact. However, we still suffered significant damage to our electrical infrastructure, vegetation and traffic signalization systems. With an excellent continuity and cleanup plan in place, we immediately commenced working and within 36 hours we were able to provide safe access for our residents and guests throughout the entire City. This was a massive undertaking on the part of all City departments and several outside contractors. We once again thank all involved in this recovery effort for getting us back up and running so quickly. Secondly, our beach renourishment project commenced in 2017. In total, 200,000 cubic yards of beach sand will be placed from public and private sources with the public portion near completion. The team from the U.S. Army Corps of Engineers, state, county, and city staff, along with a variety of outside contractors, have done a fantastic job of renourishing the narrowest sections of beachfront with minimal disruption to residents.

What would a State of the City Address be without discussing our finances? We can proudly report another year of stellar financial performance. For the sixth year in a row, we once again lowered the millage rate. Out of the 35 municipalities in Miami-Dade County, Sunny Isles Beach now is tied with Pinecrest for the fourth lowest city tax rate. This demonstrates our continuing commitment to delivering a high quality of life through responsible financial stewardship. Our tax base of assessed values continued to grow in 2017 and at the end of the year exceeded $11 billion. One of the main reasons we were able to recover from Hurricane Irma so quickly was due to our fully funded emergency reserve account. We maintain $10 million in emergency reserves to cover non-reimbursable costs when recovering from unanticipated events such as hurricanes. Having these funds readily available insured that we could immediately get out in front of dealing with the aftermath of Irma.

Our City is well known for its abundance of parks and public spaces. In 2017, Samson Oceanfront Park was fully reopened after a major renovation project. With a new solid cover over the enhanced playground and stage pavilion, the importance of this upgrade was confirmed during Hurricane Irma as it was ready for immediate use after the storm passed. The newest jewel in our park system, Gateway Park, demonstrated its appeal as we experienced record turnouts at a number of events, such as our Jazz Fest, teen glow party, and multiple holiday festivals, that were hosted in Gateway Park. With plenty of parking and a pedestrian bridge for an easy walk or bike ride, Gateway’s 5 acres accommodated a lot of happy residents and guests in 2017. We look forward to completing our multiuse activity center, with dedicated senior space, within Gateway Park this coming year.

We have always continued to invest in our infrastructure to create a better quality of life for our residents and 2017 was no exception. The undergrounding of the electrical and utility lines and lighting upgrades along Collins Avenue is one of the biggest projects in the history of our City. This project has caused all of us a lot of disruption but saw substantial progress throughout 2017. All the major undergrounding work has been completed and we are now ready for the Florida Department of Transportation to perform the milling and repaving of Collins Avenue which is scheduled to commence in February. This project also includes the installation of new street lighting along Collins Avenue. Another multi-year endeavor was also wrapping up by the end of 2017. The emergency pedestrian bridge connecting North Bay Road was substantially completed by yearend. This project has furthered our goal of making the City as accessible as possible for school children, pedestrians and bicycles without the need for utilizing Collins Avenue’s sidewalks. The completion of the North Bay Road pedestrian bridge, along with the opening of our Gateway Park pedestrian bridge, now provides access to over 75% of our City by walking and biking on interior pathways.

Sunny Isles Beach is always growing. 2017 brought us the completion of the Marriott Residence Inn and the Porsche Design building, with its unique car elevators. Nearing completion are the Jade Signature, Muse and Parque Towers condominium buildings. Breaking ground in 2017 was the Turnberry Ocean Club, St. Tropez office complex and Aurora buildings. Under construction during 2017 has been the Residences by Armani/Casa and the Ritz-Carlton Residences. Our City continues to attract some of the top developers and architects in the world as evidenced by the many magnificent buildings throughout Sunny Isles Beach.

This State of the City I want to place some particular emphasis on our continuing utilization of technology to enhance our quality of life. As most of you know by now we have been providing free Wi-Fi in and around nearly every public space in our City except for the beach. All that is about to change as a result of a lot of work completed in 2017. We recently piloted our Wi-Fi on the Beach initiative by installing an access point at 178th Street. This serves the beachfront from Samson Oceanfront Park to 183rd Street to add to the existing area at the beachfront surrounding the Newport Pier at Pier Park. The pilot project has been so successful that we are now rolling it out further with the goal to cover our entire beachfront with Wi-Fi free to the public. We are one of the first municipalities in the country to offer such an amenity to our residents and guests. We have also completed the design, and are currently installing interactive touch screen kiosks at two parks in the City. We now have an app and website that can inform riders of when our shuttle buses will arrive at their designated stop. In 2017, we upgraded all of our public parking meters to utilize the popular Pay by Phone system, making payment easy and accessible through a smartphone app. This year, our IT department assisted in building out a computer center in Marian Towers for use by residents thanks to a grant from the City for this low-income residential tower. Additionally, 2018 will bring phase two of our security camera installations throughout our park system.

One of the most important technology projects that will be implemented within our City, at the completion of the utility undergrounding project, is our Adaptive Signalization Technology Initiative. This program will tie together all of our traffic and pedestrian signals along Collins Avenue into a synchronized network that will change dynamically as traffic increases and decreases. Throughout 2017 we have been working with the traffic engineers in Miami-Dade County to bring this cutting-edge technology to our City. By monitoring and changing the timing and duration of our traffic signals during peak traffic times, we will create better traffic flow and mitigate wait times.

We had a great year in 2017 within our cultural and community services offerings. Initiatives that came out of our Cultural Master Plan continued with the establishment of the Public Art Advisory Committee. Leading up to a weekend of festivities to celebrate our 20th anniversary we hosted tours showcasing the history of our City and region. We completed the twining process of our fourth Sister City when we hosted the delegation from Punte del Este, Uruguay during our 20th anniversary celebrations. Our first intern from our Sister City of Taormina, Sicily completed her internship within the Planning and Zoning department. Throughout 2017, our Cultural and Community Services department orchestrated festivals, car shows, movie nights, sunny serenades, dances and events celebrating most major holidays. All for the benefit of our residents and guests who have come to expect nothing less!

The dedicated men and women of our public safety teams are second to none. In 2017 we had some incidents that without strong police and fire departments could have resulted in tragic outcomes. Our fire station responded quickly and extinguished a fire in one of our high rise bayside condominium buildings. This fire had the capability to spread throughout the building and endanger many of its residents. The Fire Department contained the fire and worked swiftly with our Police Department to evacuate residents to safety. In addition to working tirelessly throughout the year, our Police Department assisted many residents before, during and after Hurricane Irma. Even though we were under a mandatory evacuation order, they provided roving patrols in between hurricane feeder bands to ensure that anyone in need had assistance. I have been very fortunate to have one Chief of Police during my tenure on the Commission. Chief Fred Maas has provided a steady hand and strong leadership not only to our officers, but throughout South Florida during his career. We recently learned that Chief Maas will be inducted into the Florida Law Enforcement Officers’ Hall of Fame in 2018. This is one of the highest honors in law enforcement in the State of Florida and only bestowed upon a handful of recipients each year. We are thrilled that our own Chief Maas is being recognized with such a prestigious and well-deserved honor.

Finally, none of these great things can occur without strong leadership, teamwork, dedication and professionalism. I want to once again thank my colleagues on the City Commission for their vision and collegiality. Working together, and supporting our staff of dedicated professionals, has once again kept our City thriving in 2017. We are all blessed to be able to live in and enjoy such a wonderfully diverse community, situated along a beautiful coastline with some of the best weather in the world.  Our community is incomparable and the only thing better than living in Sunny Isles Beach in 2017, will be living in Sunny Isles Beach in 2018! Thank you and may God bless you.