(September 3, 2016) – At our last Commission meeting, the City honored its men and women in uniform with a very special invocation presented by members of the Sunny Isles Beach Police Department. This was arranged by the Police Department on its 18th Anniversary to express to the Community that in these difficult and challenging times, they stand unified in their commitment to do well and protect and defend all in our great City.

This concern and commitment to mission permeate the entire Sunny Isles Beach staff. We are fortunate to have dedicated employees in all our departments who work very hard to make our City a safe and world-class place to live.

I would like to update you on some of the most important capital projects currently underway. We greatly appreciate everyone’s patience and support during construction. This is especially true for the projects that directly impact our roadways. These are the most difficult in terms of traffic impact, both for vehicles and pedestrians.

We expect the completion of the reconstruction of 174th Street by the end of the calendar year. We are reaching the final stage, which includes the center median lighting and landscaping. Once that is complete, the top coat of pavement will be applied. As you may recall, we encountered many obstacles while reconstructing this previously privately owned roadway, built by the Winston Towers complex, which was not constructed to public road standards. Other obstacles dealt with utility companies, over which the City has little control. 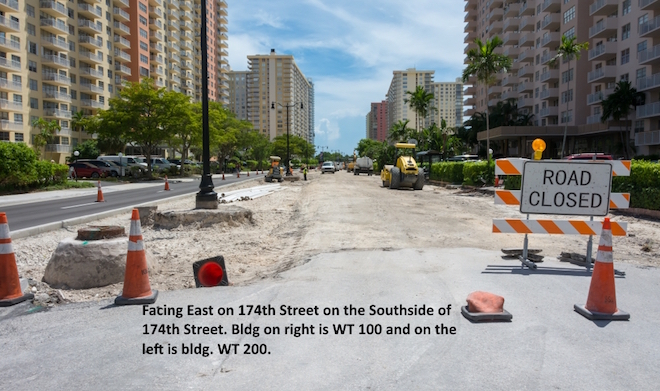 Well underway, and currently in the most congested area of Collins Avenue, is the Utility Undergrounding Project. The project started this past April at the South end of the City excavating trenches all along Collins Avenue and installing dozens of conduit which extend the length of the entire City. These trenches are both parallel to Collins and in cross sections in order to reach the abutting properties. This work is conducted at night to minimize the vehicular congestion, and is progressing ahead of our April 2017 completion date for this phase. Helping to expedite this work is an innovative material being used to backfill the trenches called “flowable fill”, which is somewhat of a cement-like material that quickly fills a trench providing stability for the conduits and roadbed. Over the coming months, we will be working primarily from 172nd Street North to the Golden Beach Town line.

Once the City completes the underground conduit installation, the Florida Dept. of Transportation (FDOT) will mill and repave Collins Avenue. This will address the concerns expressed about the bumps and dips in Collins Ave. FDOT will also upgrade some signalized intersections and add crosswalks in certain locations. The work by the state is estimated to be completed by late 2018. Then, Florida Power and Light (FPL) and the other telecommunication providers will install wiring, complete property connections and activate the underground distribution system, followed by the removal of the overhead wires and poles from Collins Avenue. We expect this work to be completed during the 2020 calendar year. As you can see, this is a long-term project, but it will be well worth the wait for the added safety, improved service, and aesthetic value.

The City has begun work on the drainage system on 172nd street, which has been flooding due to collapsed underground pipes. Asphalt from Collins Ave. to N. Bay Road on 172nd street will be excavated, pipe replaced as needed, and catch basins improved. A new check valve will be placed into the existing outfall structure on N. Bay Road, which will prevent high tide flooding of the street. Completion is expected the first quarter of 2017.