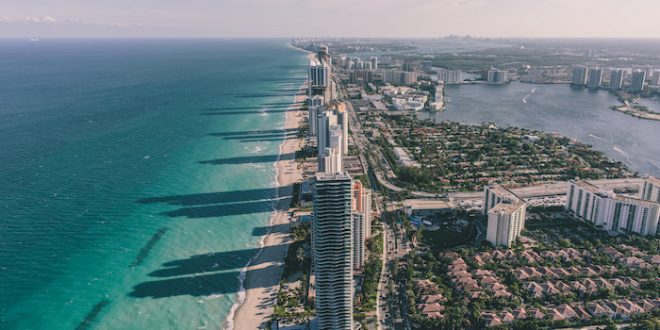 (Thursday, January 26, 2017) – This spring marks the 20th anniversary of the activities that led to the formation of the City of Sunny Isles Beach. When you explore this City, you should know, twenty years ago this area looked quite different and wasn’t even a city. It didn’t become what you see today until it became a City in its own right. So what happened?

Before incorporation, this approximately 1.5 square mile area with its then population of approximately 13,000 people was an outpost of Miami Beach. In 1942, German U-boats shelled merchant ships along Florida’s Gold Coast. In response, the United State government set up the Army Air Corps Officer Candidate School in Miami Beach. This small undeveloped strip of oceanfront land north of Miami Beach became the gunnery practice grounds. After the war, the rise in popularity of Miami Beach, the first hotel, the Kimberly, was built. Gradually, one hotel after another began to springs up. By the 1960’s and 1970’s, this area became known as “motel row” and it enjoyed a heyday even hosting the Beatles in the Castaway Motel. A few condominiums had been built and snow birds from the Northeast and Canada retired here. By the mid-nineties, this area was populated with older apartment buildings, a large population of senior citizens, and rundown, aging beachfront motels, hosting a variety of illegal activities, including prostitution and drug dealing. The area was then part of Miami-Dade County but the County seat was located downtown, far away from this area. Policing was sparse, code enforcement virtually nonexistent, and aging infrastructure and dirty streets continued to plague the community, with little hope of improvement. Developers refused to invest here. It was so bad, Aventura refused to include this little beachfront community in their boundaries for fear it would downgrade their image.

That’s when a handful of community activists decided to take matters into their own hands. In April, 1996, Dave Samson, considered the father of incorporation, and his group consisting of Irving Turetsky, Norman S. Edelcup (the eventual second Mayor), Danny Iglesias (the eventual Vice Mayor) and Irving Diamond, met with attorney Gene Stearns who had previously been successful in incorporating Key Biscayne. On January 7, 1997, 72% of the people voted “yes” to moving forward with the incorporation.

In February, a charter committee was appointed by Senator Gwen Margolis. A council-manager form of government was established. The name of the City was debated by 200 people who attended a public meeting. Some wanted to call the new City “Aventura Beach.” But the long-time residents who loved the Sunny Isles prevailed. The compromise: the City of Sunny Isles Beach. On June 16, 1997, the people of the City voted to leave the County and create their own government. On July 29, the first City Commission was elected. On August 8, the City hired its first employee, City Attorney Lynn Dannheisser, who had also assisted the City in writing its charter.

This little fledgling City had no offices, no phone number, and no manager; they literally had nothing. But the City had one unbeatable thing: A vision, a gleaming high rise City, that would offer its citizens and tourists alike a better quality of life including clean beaches with beach access points all along Collins so all people could get to the beach, responsive community policing, shuttle bus service, new infrastructure, and parks everywhere.

Fast forward to today, Sunny Isles Beach went from about 1.2 billion dollars to well over 10 billion dollars in valuation. With a visionary Commission, magnificent buildings designed by world class architects rose and the City was able to acquire a number of parks (11 parks so far) and launch extremely popular programming for residents and visitors. Our award-winning police force keeps our population feeling safe. The streets are landscaped and continually being beautified. The beaches are accessible to all With the tax revenues generated by careful management and increasing property values, a Government Center, housing the post office and a beautiful modern library, a community center, that is available to citizens of all ages, and a K-8 public school, were established to serve the community. The population has nearly doubled, the overall quality of life has improved and, all in all, the City has met and will exceed all of the goals of the founder of this great City of Sunny Isles Beach.