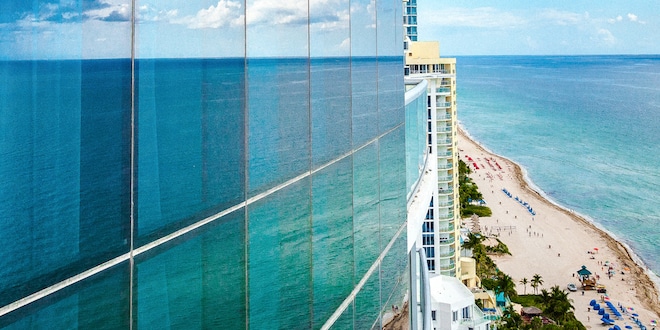 A Vision for Public Art in Sunny Isles Beach

(November 18, 2018) – On September 4, 2018, the City convened a joint workshop of the City Commission and the newly formed Public Arts Advisory Committee to discuss and develop a vision for planning public art in Sunny Isles Beach. During that workshop, there was a lengthy discussion about the City’s shared community values, all of which fall under the umbrella of creating “quality of life” and “quality of place.”

This pretty much sums up the philosophy of this City as it has evolved over the last 21 years. Under the umbrella of quality of life and place, the City Commission embraced many specific core ideas. One is the concept of “inclusion” and the celebration of the different languages and distinctive cultures enjoyed in this community. To that end, in 2017 the Commission launched an organized effort for the purpose of community and cultural bridge-building, the PAAC being organized as part of that effort. The second concept under this umbrella is respect and recognition of high standards of design quality, creativity, and imagination. This has been evidenced by all of the forward-thinking decisions implemented since the inception of the City. The most significant decision was the creation of the Transferable Development Rights Ordinance (TDR), which allowed land for parks to be donated while the development rights from that land could be sold and transferred. In most cases, the TDRs would be used on the east side of Collins Avenue. The funds gained have built 11 City parks and have significantly paid for much of the City’s infrastructure upgrading over the years. There is still more to come in creating future parks, open space, and more opportunities for creativity and art.

The City is united behind its recognition and promotion of family life, with an emphasis on promoting citizen interactivity. This has been evidenced by the creative partnership the City established with the MDC School Board, which resulted in building the City’s own K-8 school as well as expanding the existing full range of cultural programming for families, and various cultural heritage events.

Out of this discussion, another highly significant direction for our staff was solidified. When asked about the most important beneficiaries of the public art, there was unanimous consent that our citizens were the City’s top priority. Although the City has iconic buildings and destination hotels and enjoys a reputation as a world-class destination for many visitors and tourists, such tourism more and more happens on its own through the reputation of these fine destinations. This workshop was another venue where it became clear that, unlike jurisdictions such as Miami Beach or Miami, the elected officials of the City of Sunny Isles Beach wish to truly focus their efforts on the quality of life and place for its residents.

There was a consensus that art could be part of creative placemaking (marrying form and function), in some cases carrying a sophistication of design as befits a city with the stature of Sunny Isles Beach. That art, like our architecture, might attract visitors to the City, and is for the improvement of the aesthetic vision and the enjoyment of the citizenry. The Mayor likened this balance to the programming of the City’s Jazz Fest, which historically always tried to create a balance between popular music and classical jazz.

The City aims to maintain forward thinking in all of its actions, including the selection of public art. It wants to engage the citizenry and select art that becomes interactive. For example, some of the art chosen may have a theme, i.e. “health and wellness” or “cultivation of gardens.” It may be educational or bring in science or nature. We will try to make our shade structures, our benches, and our signage artistic and unique. Light Art, the creation of art walls and unique spaces within the confines of the community values expressed above, and sculpture were among the forms of arts most discussed. The installations could be of a temporary or permanent nature.

The PAAC is working on a long-range sitting plan for the numerous public spaces and parks the City has acquired and developed or will develop. This will begin with the concept design for the City’s ART Park, which is part of Town Center Park. Once completed, this park will become one of the few of its kind that exists in the United States. We have high hopes for the success and work being undertaken by this talented group of residents and staff.