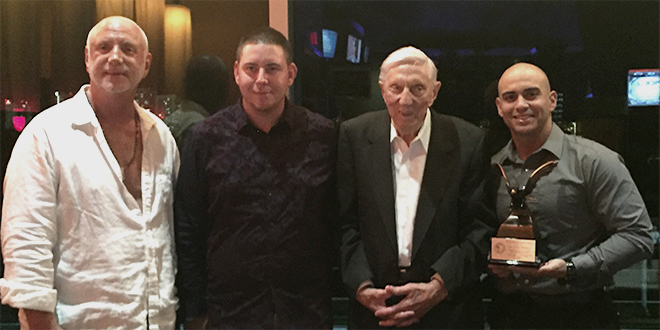 More than 30 dignitaries attended the ceremony, which recognizes an officer who exemplifies the traits of two former world famous athletes and individuals: John and Joe Borrell. Officer Barrios is known for his dedicated work ethic, compassion and caring style of policing. He is at the NSE/SIB K-8 School every day protecting students as they make their way to and from school. Barrios is an avid golfer, extremely talented I might add, which is symbolic of John Borrell, who was a golf coach for the Olympic Team for Central American countries and a golfing pro. It was no coincidence that Barrios reflected many of the qualities possessed by those for whom the award is named.

Dignitaries from as far away as New Jersey and Philadelphia came to attend the event, which has become a most honorable achievement and award presented to the Sunny Isles Beach Police Department officers. Congratulations Officer Barrios!

To report a non-emergency tip to the SIB Police Department, e-mail tipline@sibpd.net