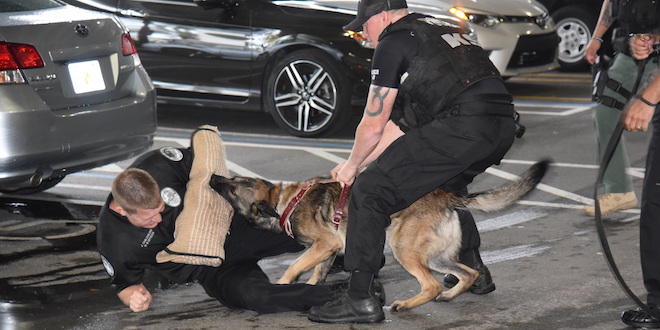 (Tuesday, October 31, 2017) – Too often in some communities, people equate police officers with ‘enforcement,’ such as receiving a speeding ticket, arresting someone, or worse. Listening to Sunny Isles Beach Police Chief Fred Maas address the Aventura Marketing Council at the Law Enforcement Appreciation Day on Friday, Oct. 13, 2017, I was reminded of the pride and admiration our department has earned from our community. What he said was so moving, I felt it should be shared with everyone, not just those in attendance that morning.

Chief Maas opened by expressing the humility he felt representing his police chief colleagues and the local law enforcement community. He knew it was an enormous responsibility to express and relate what every other officer would say if they were delivering the speech instead.

His message to the audience was simple: “Thank you.” He simply said “thank you” for your continued support of the police through good times and difficult times. He thanked the sponsors of the Police Appreciation event and the recognition given to each department. He thanked them for standing not just “behind them,” but for standing “next to them” in a show of support for the job they do.

Chief Maas stated that this was important because when working together, a community and its police department can change the culture for the better, improve relation- ships and attitudes, and make a difference.

The Police return the favor of your gratitude and support so that you, as a resident, are proud to say, “Those are my police officers, that is my police department, and I am proud to support them.”

Chief Maas explained that police officers want to be proud of their service and career choice. They feel the hurt, embarrassment and skepticism when they make mistakes.

He went on to say, “They also feel the pride and support and love from a community for a job well done or for saving a life. Too often the negatives are highlighted and showcased, and the heroic or compassionate deeds are buried on the back page. But a community working in concert with its police department knows the value and the good that comes from it.”

Support emanates from several areas of the City: parents of school children, business owners, hotel and restaurant operators, and most importantly from your City Commission and City officials. One clear example Chief Maas highlighted for our City involves our K-9 Unit.

Chief Maas recounted, “Recently, in an attempt to better protect our City against domestic or international terrorism, the City Commission and Manager’s Office approved the expansion of the K-9 unit from a single canine to three. These incredibly brave animals and their handlers are specifically trained as work dogs and in the detection of narcotics, explosives and search/rescue. And it was accomplished through a grant and use of forfeiture funds at minimal expense to the taxpayers.” He further explained, “This provides a win/win for all in that public safety is enhanced and the vision and support of your commission/council accomplished this with minimal financial cost to the community.”

Chief Maas closed with, “Together, with the support of all working together, we can make a difference. And for that, your police department says ‘thank you.’”