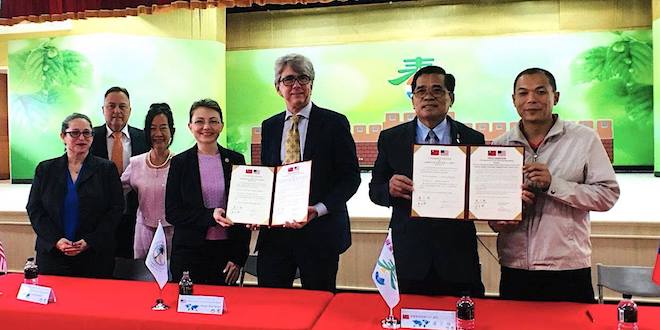 (Saturday, April 27, 2019) – Over my many years in public office, I had the privilege of being hosted at all of our Sister Cities with the exception of Hengchun.

Well, that changed last month when our commission accepted an invitation to Taiwan for a Sister City visit and agreement signing. Attending from our city government was Vice Mayor Larisa Svechin, Commissioner Jeniffer Viscarra and myself. Also attending were Keith and Fang Oliver, longtime residents of Sunny Isles Beach. Fang Oliver is originally from Taiwan and was the genesis for forming our Sister City relationship six years ago.

Our interpreter, Wayne Chang, was assigned to us from the local Pingtung University where he is an undergraduate senior. Wayne had a great sense of humor and did an excellent job attempting to translate my myriad of jokes that typically did not make much sense in Chinese! We spent five days touring around Hengchun and Pingtung County, visiting the university, Kenting National Park and many other sites.

The city was once completely surrounded by a wall, of which about half remains. The four gates–north, south, east and west–remain and are used to serve as the only passage points in and out of the city. The city of Hengchun is the southernmost city in Taiwan and acts as the entryway to the national park, which provides pristine beaches, great hiking and beautiful scenery. This makes Hengchun primarily a tourist destination during the summer months, bringing more than one million tourists each year. Very impressive given their population of 30,000 residents is just slightly larger than ours.

Our hosts, headed by Hengchun Mayor Lu, also provided us with a variety of great food. Pingtung County has a pure mountain-fed municipal water system, so we were able to eat and drink whatever our local hosts served. Our hosts provided us with very nice beachfront accommodations that I would highly recommend.

We all formed a very strong bond with our counterparts in Hengchun, recognizing many similarities between our two cities and vowing to strengthen our relationship into the future. We will be inviting Mayor Lu and his delegation to come and visit us in early December.