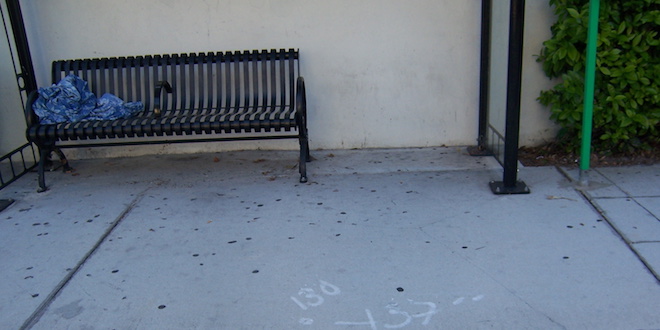 Being Homeless is Not a Criminal Violation

This is Part Three of a three-part series from Sunny Isles Beach Police Department Staff.

Read Part 1: Homelessness Is A Problem, Not Always A Crime

(Thursday, December 28, 2017) – The assimilation of the homeless in our society and community can be an annoyance and an inconvenience to many, but the fact is homeless individuals are not, for the most part, violating the law. Over the years, many protections have been awarded to the homeless as a result of the unfortunate, and in some cases, despicable treatment they have endured. Being beaten or assaulted is accurately described as despicable. In some areas, that unthinkable act occurs more frequently than one would imagine.

The homeless can undoubtedly be considered an “annoyance” to others, often infringing on our acceptable standard of social acceptance. They act improperly, are hygienically deficient or claim public spaces because they have none to call their own. Some utilize public facilities to their advantage, inconveniencing others from general use. Others seek shelter from the elements in areas they are not supposed to be. Homeless individuals often travel to our City because of the safety and lack of persecution and harm they have previously experienced, subsequently choosing to stay.

As a result, police officers are responding to complaints about homeless individuals from the public. Many of these complaints, however, are not because the individual has broken the law. The person hasn’t stolen; they haven’t vandalized; they haven’t trespassed. Police officers offer them assistance, including transport to a shelter, but a vast majority of times the homeless refuse; they do not want to live under restrictive rules. Yes, this is a very difficult situation. In addition, there is frequently a mental health issue associated with the person. We can offer them help, but only if they meet the criteria under the law for such help. They are offered protection under federal, state and local law that we may not understand nor agree with, but it is the law and we must govern ourselves accordingly.

Several years ago, I wrote a series of articles discussing the issue of homelessness. I explained how some cities are under a consent decree because of their previous treatment of the homeless. For that series of articles, click here. The courts have guaranteed the homeless rights, but they do not permit the violation of state and local laws. That is where the determination of the police officer comes into play. I could cite numerous examples where residents have complained about the actions of the homeless. Some say the police do not act upon these complaints, but this is furthest from the truth. We respond to every call as well as conduct proactive policing on our own. We assess. If a law is being violated, we proceed appropriately. If not, we do all we can in a humane way to offer assistance: help relocate the individual to a more permanent residence, extend equal treatment, and ensure their safety and mental well-being if necessary. Oftentimes, that is the most we can do, and the rest is up to them.

To report a non-emergency tip to the SIB Police Department, e-mail tipline@sibpd.net