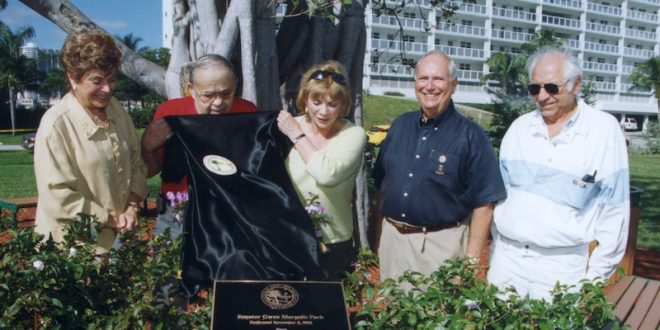 (Tuesday, June 23, 2020) – It was with great sadness that I received a phone call on Tuesday, June 9, 2020 from Edward Margolis notifying me of the death of his mother, Senator Gwen Margolis. This was not only the passing of a dear friend and mentor; it was the loss of an iconic political figure in the history of Sunny Isles Beach. If not for her efforts, we may never have become the world class city that we are today.

Senator Margolis served in the Florida Senate for 10 years before becoming the Senate President in 1990. At that time, she was the first woman to lead any state senate in the United States! Senator Margolis left the Florida Senate in 1992 and was elected to the Miami-Dade County Commission. There, she was elected by her peers to be the first woman to ever chair the Miami-Dade County Commission.

It was during her time on the Miami-Dade County Commission when Gwen Margolis became a champion for Sunny Isles Beach. Back in the 1990s, Miami-Dade County had many communities in its unincorporated area that wished to form local governments that would be more responsive to their specific needs than the distant county government. County officials were not necessarily happy with that idea as it meant giving up tax dollars and certain controls over these communities.

In 1996, a group of citizens led by our first mayor, David Samson, headed the effort to create the City of Sunny Isles Beach. To accomplish this goal, they needed the permission of the County Commission to allow our residents to vote for city incorporation. At the time, there was a lot of County political pushback because of the potential loss of County tax revenue. This had already played out with the incorporation of three new cities. There was even talk of a County moratorium to prevent any new incorporations.

To our rescue came Gwen Margolis. She was a believer in the idea that the best form of government for the people was government closest to the people, i.e. local city government. She was determined to help us in our effort to gain the County Commission’s approval. She succeeded! Our residents overwhelmingly voted in favor of becoming a separate city. Gwen appointed the members of our Charter Commission and on June 16, 1997, the City of Sunny Isles Beach was incorporated.

In a December 2001 ceremony, the City of Sunny Isles Beach honored Gwen by naming its second major park “Senator Gwen Margolis Park,” located at 17815 North Bay Road. She became known by many of our residents as the “Mother of Sunny Isles Beach,” a title well deserved as she inspired our community to reach for greatness.

Senator Gwen Margolis will always have a place in our hearts and memories. She will always inspire in us the best principles of government by doing what is right for the people. That is how we will continue to honor her memory.

Thank you, Senator for making it all possible. Our fondest wishes to your family

News from our City Manager

Click here for past articles by the City Manager.