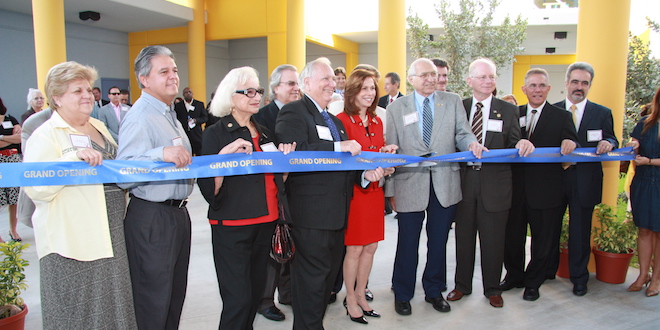 City officials and partners at a dedication ceremony commemorating the opening of the NSE-SIB K-8 School on April 24, 2009.

(Friday, April 27, 2018) – This June marks the 21st Anniversary of Sunny Isles Beach. We also celebrate the 10 year anniversary of our school, Norman S. Edelcup / Sunny Isles Beach K-8, the first school in our City. The history goes back more than 15 years. The vision and determination of local officials both in the City and surrounding area, together with the school district, made this concept a reality. With younger families with children moving to Sunny Isles Beach, the goal to build a school within City limits became a top priority.

In 2004, the Sunny Isles Beach Commission officially approved the plan that would change the demographic makeup of our City forever. This revolutionary concept required the City to partner with Miami-Dade Public Schools in providing resources and land. Making an investment in the future, the City Commission voted to allot a grant of $12 million to be awarded to the Miami-Dade school district to help acquire the 2.1-acre site. Many residents, both elected and volunteer, poured time and passion into NSE/SIB K-8. The school was originally named Sunny Isles Beach Community School. It was not until 2011 that the name changed to honor the sitting Mayor at that time, the Honorable Norman S. Edelcup.

Our school has impacted our businesses, events, programs, and landscape, becoming a premier destination for both vacationers and those looking to settle down. Many refer to the school as the jewel of our City. I concur.

Assumed the duties & responsibilities of Mayor pursuant to our City's Charter on September 1, 2021.