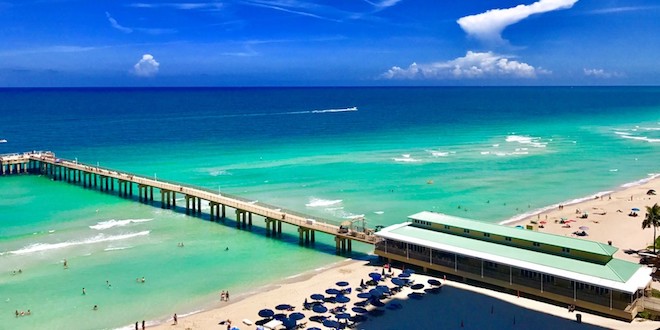 (Friday, February 9, 2018) – The City of Sunny Isles Beach is prepared to meet the challenges of sea level rise. Although this issue has only become a real topic of conversation in the public realm in the last few years, the City has been diligently creating and implementing a plan to address flooding since incorporation 20 years ago.

One of the first things I noticed soon after becoming the City Manager in 2000 was the massive flooding in low-lying areas on the west side of the City that occurred nearly every time it rained. As a barrier island city, bounded on one side by the Intracoastal Waterway and the other by the Atlantic Ocean, it seemed obvious that one of my first priorities needed to be addressing the aging and inadequate stormwater system and related infrastructure such as local roads. We therefore undertook a comprehensive engineering analysis, planning to address the worst areas first, and moving on to the remaining problems next. In order to tackle each sector of the City in a sensible and thoughtful manner, we included these projects in the City’s capital improvement budgets, making progress each year in order of priority.

We started in the Golden Shores neighborhood, the most severely impacted area of our City. The entire drainage system was upgraded, all roads re-engineered at the correct elevations to improve drainage, but not create additional flooding by new standards requiring higher elevations. The one pump station in the City was overhauled. Since then, we completed major stormwater projects in various sections of the City including 174th Street, Central Island area, and 172nd Street, with more still to come. Since this work has a limited life, we are in the planning stages to start over in order to stay ahead of deterioration due to the subsurface conditions of a barrier island.

Although flooding continues to affect barrier island communities like ours, the City improved so much overall that we progressed from the original complaints of flood damage in homes. Now, our worst complaint is during the King Tide season and the heaviest of rains when we might experience wet feet and concerns for vehicular driving through some streets.

Still, we continue to seek new and better solutions, and as new research by experts in Florida becomes available, we realize the most logical approach is through national coordination and support. Through satellites, specially equipped floating buoys off the coast, and tidal gauges, we are told the sea level rose eight inches since 1950, and its speed has increased in recent years, with scientific projections forecasting another eight inches of sea level rise in the next 20 years. We want to stay on top of this given the limestone bedrock beneath much of the State, which allows rising seawater to infiltrate sewage systems and threaten groundwater supplies via saltwater intrusion, a unique and general threat to all of Florida.

The City Commission decided that, in addition to focusing on internal capital improvement projects, we should be proactive on an even larger scale. This past December, the City Commission joined other coastal communities nationwide to fully address the challenge of sea level rise and flooding. At the meeting, the Commission adopted a resolution to become a member and supporter of the Seawall Coalition, recognizing the need to advance national solutions to sea level rise and flooding, and not ‘go it alone.’ This Coalition and our involvement is the work of the First Street Foundation, a non-profit organization devoted to activating nonpolitical solutions to sea level change and educating and empowering cities. Through the website, sealevelrise.org, the Foundation provides a simple and educational digital site that explains sea level rise and flooding with State-specific information.

As part of the City’s effort to foster more knowledge on this subject, we encourage all readers to visit sealevelrise.org for more information. Businesses, residents and visitors alike can rest assured; the City is continuing to take proactive measures and be part of the solution for the good of our beautiful piece of coastline.