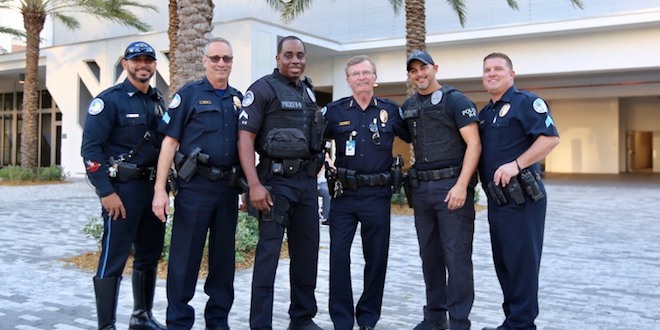 (Monday, June 24, 2019) – This past May I was reminded of another reason why I choose to live in Sunny Isles Beach. For those who do not know, I am not just the City Manager, I am also a proud resident of this great city. It is not a job requirement; I choose to live here.

Among the obvious reasons such as the low tax rate, high-quality services, A-rated public school and plethora of world-class parks, the primary reason I and many people choose to live in Sunny Isles Beach is the undeniable feeling of safety. Safety is a top factor in one’s decision as to where to live and raise a family.

As I’m sure you already know, that feeling of safety came into question this past May. Like so many other communities worldwide, we found ourselves in a drive-by shooting situation that resulted in one death and injuries to others. One difference between myself and some other residents is that I have in-depth knowledge of the qualifications and training of our police officers, as well as the comfort of knowing about our mutual aid agreements. As this awareness puts me at ease, I thought I would take this opportunity to share this information with all of you.

When the City was first founded, the city commission knew having a police department to call our own was a priority. This results in the benefits of quicker response times and providing the most interpersonal support. Unlike some other cities that rely on the Miami-Dade County Police Department, we receive the advantage of 24/7 support as our officers are always in the city and know our community well. The value added from this is invaluable for the department to best serve its residents.

One of the key components of a good police department is establishing trust between the officers and the community. Our department is well respected in our community because they take the time to build strong connections with residents. Our officers are always visible: on the streets, in the school, and at events. The department also maintains an open line of communication with the City’s hotels, condominiums, and their respective securities, assisting in fortifying the security of their establishments.

But developing relationships with our own community is not the department’s only priority. Throughout the years, the SIBPD has established concrete inter-local agreements with neighboring communities, such as the Town of Golden Beach to the north and the City of Aventura to the west. This arrangement allows for reciprocated assistance during times of need.

During the more than 20 years that the police department has been keeping our city safe, they have won multiple local and national awards, including the National Association of Police Officers TOPCOPS Award®. Our Chief of Police, Dwight Snyder, leads this qualified team with more than 21 years of experience in Sunny Isles Beach alone. One of the first hires in the SIBPD, Chief Snyder has trained and graduated from the prestigious FBI National Academy. His expertise has guided this department into a new era of policing and will continue to keep our community safe.

Though we never wish for situations like this to test the effectiveness of the extensive training of our officers, it is reassuring to know that they are prepared. They performed flawlessly, responding quickly and proficiently. They turned initial chaos into calm. In addition to all of the officers that responded on their day off, the utilization of the mutual aid agreements with our neighbors ensured a secure and organized crime scene for Miami-Dade County homicide to conduct their investigation. At times like this, following a tragedy unlike anything our City has experienced before, it is comforting to know more about the men and women that we have protecting us and the resources they have available to them.