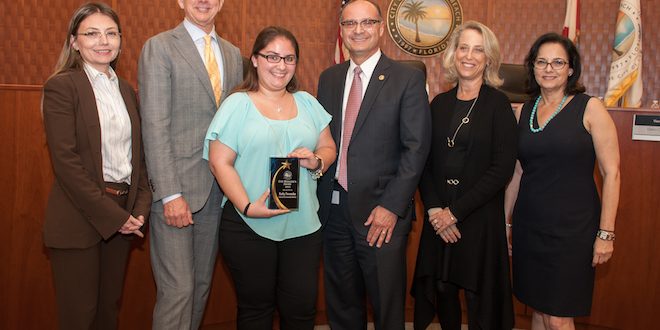 (Friday, January 27, 2017) – Upon my return as City Manager in 2012, I realized how many dedicated employees had remained with the City from the early formative years. I also met many new faces of young energetic members of the staff. So impressed with their skills, experiences and dedication, I thought it time to constitute an annual acknowledgement of the good work of those who may be rarely seen by the public, who don’t seek kudos or any fanfare. Therefore, commencing with the 2013 calendar year, we initiated the City Manager’s “Employee of the Year” awards.

There is no set criteria, the nominees are not selected by the City Manager. The nominations come from their peers or other management staff. Most gratifying as an organization, and for me as City Manager, is that most of the nominations over the past few years have come from peers who work in a different department from the employee they are nominating. That is a clear example of mutual respect and a team approach that works well in our organization. We have had anywhere from one recipient a year, up to four recipients in one year. There is no annual limit on recipients, but the reasons presented have been so compelling that we typically have multiple annual awards. Starting with the 2015 Calendar year, we acknowledge these unsung heroes at the City Commission meeting immediately following the staff presentation of the awards.

Alayne has been with the City from the beginning, she has literally “grown up” with us. She was first hired in the Administrative Services Department to be part time support for the original City Commission. Through many changes and a transfer to the CCS Department in 2010, Alayne ironically finds herself working closely with the Commission again but in a much different way. As the Communications Coordinator, she has taken on three times the volume of work and increased both the quality and quantity of our publications. Her current role in the City provides many challenges, each of which she meets with a good attitude and professionalism. She interacts with the Commission regularly and I often hear positive feedback on her performance. Alayne also oversees and manages photo shoots for City purposes which would otherwise require professional outside services that would be much more costly.

Kathy Fernandez started with the City as a part time employee; she is working towards her Master Degree in Global Strategic Communication from FIU. She has developed an impressive cadre of volunteers that regularly work at City events. She has singlehandedly raised awareness of the City’s Scholarship Program, which has led to a record number of applicants this past year. All of this while graciously supporting other departments with anything she can and using her creative talents to plan and assist with special events.

Last but not least, James Hill, Chief Building Inspector in the Building Department. Jim has been with the City since December 2004 and is a critical figure behind the scenes on most building projects in the City, especially when problems arise. He has been instrumental in getting the Gateway Park Project completed. If there’s a stumbling block, or a seemingly insurmountable obstacle, Jim will find a way through it. He is the “go to guy” for many issues including City Capital Projects and developments under construction in our City.

These three valuable employees are recognized, along with nine others, on a plaque, which is displayed in the fourth floor lobby of the Government Center. Truly a Team Effort!