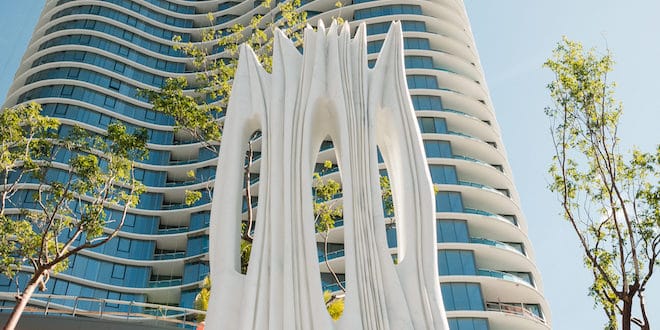 (Sunday, February  2, 2020) – The City of Sunny Isles Beach is known as a hub of beautiful architecture, but now we are also becoming a city known for art. In 2016, the city commissioned a Cultural Master Plan (CMP), which, among other things, was designed to strategically use art and culture to enhance the aesthetic appearance and overall quality of life in the city. At the same time, the CMP creates a new sense of community for the diversity of cultures that make up our residents.

In this regard, our Art in Public Places ordinance requires developers to include an element of art as they construct their projects. Many of our quality developers are embracing this new requirement as an opportunity to enhance their own projects and a way to improve the urban environment, increase the use of public space and celebrate our community. Working with our newly formed Public Arts Advisory Committee (PAAC), which consists of six highly credentialed residents, a public art curator and appraiser, and a CMP consultant, we are already seeing new pieces around the city. Last year, the Ritz Carlton unveiled a beautifully commissioned sculpture created by renowned sculptor Pablo Atchugarry. Carved from Carrara marble and standing 11 and half feet tall, “Dreaming the Future” sits at the base of the Ritz Carlton near the sidewalk for residents, passersby, and visitors to enjoy.

Armani Casa developers on the east side of Collins Avenue are approaching art from a different perspective. To create an innovative and sustainable work of art, they are installing “The Green Wall” by Enea Landscape Architects and LiveWall. The unique plantings of this piece bring passersby a sense of calm set against the steel and glass structure behind it.

On the city’s end, the PAAC is designing a meditation garden on the site of the old skate park contained within Town Center Park. The garden will be landscaped and shaded, and also include some interesting artistic pieces. Park visitors will be greeted by a very uncommon wire contemporary art sculpture by Korean artist, Seo Young- Deok, composed of a metal grade link chain depicting a woman meditating. The piece is approximately 10 feet tall and six and a half feet wide and was contributed by the developers of the Muse Project. The garden will also feature a meditative refective fountain using polished stainless steel, light and water. The fountain is designed by English artist, David Harber, who has pieces in England, France and various sites across the United States.

At its core, the city is focusing on using infrastructure as an opportunity to create art based on certain standards, guidelines, and goals established by the PAAC. Tree overarching goals exist in terms of infrastructure throughout the city:

Hereof, the city’s pedestrian bridges over Collins Avenue will feature forward-thinking architectural design. The Commission is also looking to re-imagine and replace the current identifying signage at the city’s four entrance and exit points. This is an opportunity to create unique “signature” art for the city. The concept of crosswalk art on local streets is also being explored.

We continue our quest to procure new artwork and establish art events. Several events have already been implemented – outdoor painting pop-ups on the pedestrian bridge and the beach; the creation of a painting club; and a pop-up art show in the Government Center. New cultural events are also coming into focus. For example, this November, the city is hosting Symphony of Flavors at Gateway Park, blending locally-sourced fine dining and orchestral music in an intimate outdoor venue.

Finally, through surveys conducted by Cultural Master Plan consultants, we learned that both developers and residents alike have expressed interest in hosting an art festival. To that regard, the PAAC is exploring future partnership opportunities with a national arts festival. We are starting to see beautiful enhancements around Sunny Isles Beach and have more to come. Stay tuned for future artistic updates.