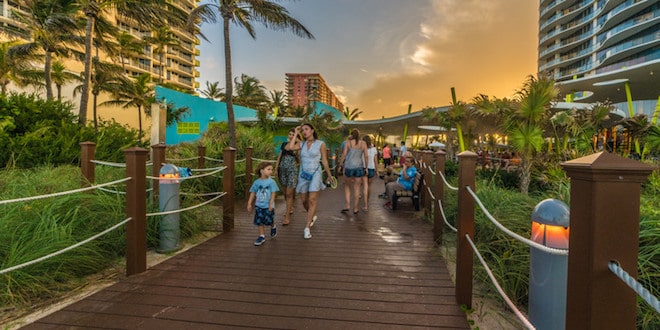 Sunny Isles Beach: Then and Now

(Tuesday, July 30, 2019) – If you held up a snapshot of Sunny Isles Beach 22 years ago next to one taken today, the City would almost be unrecognizable. From the replacement of run-down motels with modern high-rises on the east side, to the development of City parks and public facilities on the west side, Sunny Isles Beach has undergone quite a transformation since its incorporation in 1997. We now employ nine code compliance officers, 16 public works personnel, and 27 facilities operations staff who are here every day to maintain the City. But this wasn’t always the case.

In the years before Sunny Isles Beach was incorporated, the County was unable to provide adequate code enforcement in the area. When our Code Enforcement department was established in 1998, a handful of the old hotel structures, deemed unsafe, were demolished. The City purchased the land of two demolished motels to make way for the beautiful new beachfront park we now know as Samson Oceanfront Park. For the first time in the area’s history, residents on the west side of town had a fully enfranchised, safe access to the beach, along with public restrooms and foot showers, which paved the way for future public amenities we now offer, including four public restrooms and foot showers along the length of the beach.

In addition to accessing the beach through the park, one City goal was to provide all residents of Sunny Isles Beach the uninhibited ability to walk to the beach through more than just a small, five-foot-wide, poorly maintained strip that were the then-beach accesses. Beach accesses used to exist simply as dirt paths or blacktop that were far from groomed, littered with trash, poorly lit, and lined by rusty fences falling into the walkable area. If you have walked to the beach recently, you most likely walked through one of our more than 19 well-maintained, and appealing beach accesses; and we have four more to come.

Our public spaces also amassed an assortment of trash and derelict items before the City was incorporated and enforced by Code. The area under the William Lehman Causeway was considered a “no-go” zone until the space was cleaned up and optimized for parking and the City’s public works department. Trash cans around the City were rusted and open, oftentimes spilling out trash on the streets and the beach. Now, you will see superior trash cans that actually hold the trash thrown inside and are more aesthetically pleasing; and soon they will be upgraded with the completion of the Utility Undergrounding Project.

Our beach sometimes becomes a contentious subject when it comes to trash, seaweed, sand, and other environmental issues. I want to clarify a few points. Miami-Dade County is ultimately responsible for the maintenance of the beach. Each and every morning after sunrise, the County “drags the rack line,” which means they drive a tractor across the length of the beach and bury seaweed underneath the sand. Once a quarter, they also send a “sand sifter” to collect garbage through sifting through the sand. For those residents who have been around since before incorporation, the cleaning used to be haphazard at best; it is now completed with much more enthusiasm and vigor.

These are just some of the ways our City has drastically changed since incorporation only 22 years ago. Our Sunny Isles Beach parks, public spaces, and beaches are certainly not what they were; they are tremendously better than ever!