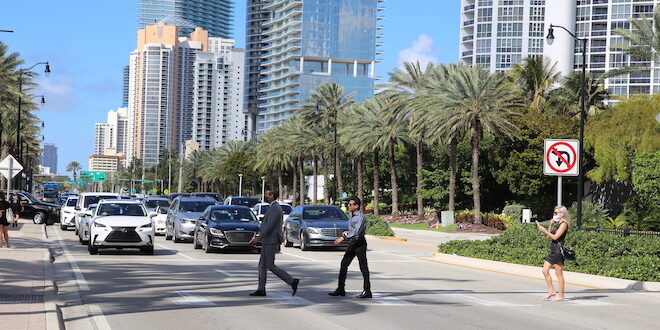 (Thursday, April 1, 2021) – Given the nature of our roads, population, and location, traffic volume and congestion are inevitable. We can all agree that additional measures on the road better protect our community. I want to share what action the City is taking to make the streets of Sunny Isles Beach safer for everyone.

Though it may seem as if traffic and pedestrian safety have become a more prevalent issue for the City in the last few years, what residents might not know is that we have been addressing traffic and pedestrian safety concerns in a multitude of ways over the last 10 years. The Sunny Isles Beach Pedestrian and Bicycle Safety Program was created in May 2010 and has consistently promoted safety measures and awareness. The Program has hosted more than 50 community events with these goals in mind. Furthermore, when the administration of the Police Department changed back in 2018, they began a formal effort to increase traffic enforcement and implement zero- tolerance for law breakers.

Most recently, PD began conducting High Visibility Enforcement (HVE) details on Collins Avenue to promote and educate our community about traffic laws that protect the safety of pedestrians and bicyclists. The detail is specifically from the 17000-18900 blocks along Collins Avenue and will run until May 14, 2021, but you will continue to see an increased presence around the entire City moving forward. PD’s zero- tolerance policy remains in place, with officers stopping all identified motorists who are not following the law. Last month, we started issuing updates regarding traffic and pedestrian safety initiatives, statistics, events and news. The Road Reports are posted regularly on our social media pages and sent via email blast, but you can also view the complete archive on our website at sibfl.net/trafficsafety.

When looking at the data, it is evident that our police department’s efforts are working. Between February 11 and March 16, 2021, just over one month, our Automated License Plate Readers (ALPR) detected approximately 2.3 million vehicles traveling through Sunny Isles Beach, a considerable amount when you consider our population of just over 23,000. During that period there were 44 traffic crashes and 1,286 moving violations issued. When you break those numbers down, many can be attributed to minor accidents, incidents happening in parking lots and medians, not necessarily on the road or involving pedestrians.

During the peak of the pandemic in 2020, we saw a drastic decrease in traffic, which resulted in less crashes, citations, and violations. But as we reopened, we did see traffic return to a more normal level. In 2020, there were 511 total traffic crashes in SIB, whereas in 2017, prior to procedural changes increasing police presence and enforcement, there were 729 total traffic crashes. Last year, our police department issued 194 careless driving citations, 175 speeding citations and 136 stop sign citations. Since January 1, 2021 and our increased HVE details, PD issued 259 speeding citations, 190 red light citations and 157 stop sign citations. They are also issuing upwards of five tickets a day in our school zone, more than ever before.

As much as we would like all our officers on the streets at all times, the reality is that they cannot be everywhere at once. PD must still respond to calls for service, such as domestic issues, criminal activity, and civil complaints. In 2020, we received 33,847 total calls for service that one or more officers responded to. During the pandemic, they have also been enforcing County and City orders, having made approximately 11,000 contacts regarding mask issues alone.

Off the streets, we have spoken with the District 6 Secretary of the Florida Department of Transportation (FDOT) along with State representatives to move forward and implement new measures to help keep our community safe. FDOT provided us with a series of improvements to put more awareness on the Sunny Isles Boulevard signalized crosswalk; some you will see within the next three months and others over the late summer. They agreed to add pavement markings, warning signs, and flashing lights. Even more initiatives are in the works along Sunny Isles Boulevard and Collins Avenue. FDOT is expediting money to buy and install a stationary radar that catches speed on Sunny Isles Boulevard, and the City has received FDOT approval to add new speed monitors on Collins Avenue.

On March 25, we hosted a Pedestrian and Bicycle Safety Forum where residents joined our panel of City, County and State representatives to share their questions, comments and concerns regarding safety on our roads. Moving forward, we will work together with traffic experts, engineers, planners and law enforcement in charge of our roadway to explore how to begin putting the most feasible, FDOT-approved ideas into effect.

The voices of our residents are being heard. As much as they can, our officers are patrolling the roads and enforcing the law. I also want to remind residents that safety is everyone’s responsibility. No matter your role on the road, everyone must follow the law and obey all signs and signals. I encourage you to sign up for emails at sibfl.net/notifyme and follow @SIBPD on Facebook and Twitter to receive our Road Reports and additional updates regarding safety in Sunny Isles Beach.