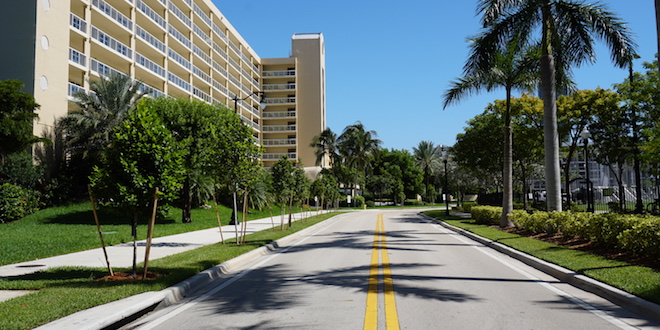 (September 1, 2017) – Sunny Isles Beach was recently awarded a $25,000 matching grant from Neat Streets Miami. This grant funds the planting of 126 trees as part of our Central Island Tree Planting Project. Progress is already visible by the number of trees planted along North Bay Road from 174th Street to 178th Street, and along many of the streets in between from North Bay Road to Atlantic Boulevard. The trees look beautiful and, with rapid growth, create more shade providing respite for pedestrians and bikers from the hustle and bustle of Collins Avenue. The grant program, named “Million Trees Miami,” is a countywide initiative with the goal of planting one million trees and achieving a 30 percent tree canopy cover across Miami-Dade County by 2020.

The primary goal of Neat Streets Miami is to create beautiful gateways and corridors by enhancing the appearance of our cities. In some areas, it is reducing roadway litter on county roads through the Adopt-a-Road Program. In others, it is enhancing the look and feel of county public properties through the development of the Miami-Dade County Aesthetic Master Plan. This approach goes hand in hand in advocating for large-scale landscaping projects at key corridors and gateways to our county. The main objective that resonates in our City is that these improvements must reflect and celebrate our City’s world-class identity. We, as a City, are proud to be a member of the Neat Streets Miami Organization, housed in the Miami-Dade Parks, Recreation and Open Space Department. It began with the shared vision of County Commissioner Dennis Moss and support from our Commissioner Sally Heyman. On the City side, this grant application, including a tree planting design that met the goals of the Transportation Master Plan, was cooperatively developed and submitted by Claudia Hasbun, Planning and Zoning Director, and Kathryn Matos, Assistant to the City Manager for Special Projects of the City of Sunny Isles Beach.

Sand For Our Beach Coming Soon

This fall the United States Army Corps of Engineers (USACE), in partnership with Miami-Dade County, the Florida Department of Environmental Protection and the City of Sunny Isles Beach, will begin a beach renourishment project placing approximately 140,000 cubic yards of sand on our beach. The project spans from the northern City limit and heads south to about 186th Street, with additional sand being placed at critical areas just north and south of the historic Newport Fishing Pier. The Armani Casa and Ritz Carlton projects are providing 50,000 cubic yards of ancillary sand to the beach in areas not covered by the USACE.

The project is expected to conclude by March 2018. It is a massive undertaking that requires trucking about 8,000 loads of sand from a sand mine in central Florida to our beach, along with testing for quality standards and compatibility with existing sand. The trucks will access the beach from 3 locations: the Ellen Wynne Beach Access, the former Monaco motel site, and the north end of Haulover Park, using the existing Ocean Rescue emergency lane once on the beach. Most of the beach is to remain open during construction, with flagmen stationed throughout the project limits to ensure that pedestrians can safely access the beach.