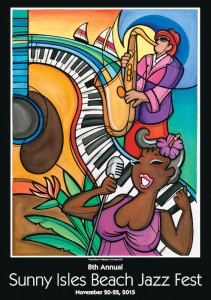 (December 2, 2015) – The winning poster for the SIB Jazz Fest Poster Contest this year was painted by Michael J. O’Connell of Clearwater, Florida. Originally from Johnson City, New York, he graduated from Tampa School of Art and Design and is a self-taught painter whose works would be categorized as contemporary/abstract. Michael is currently employed by Sharpline Converting as well as running his own freelance design company. Michael finds inspiration for his artwork in the tropical nature of Florida and the Gulf Coast. The first professional showing of his art was held in 2014 during the St. Petersburg Artwalk.

The Sunny Isle Beach judges are not alone in their appreciation of Mr. O’Connell’s artwork. In the past few years, his art was chosen as the Central Intercollegiate Athletic Association (CIAA) National Logo (2013), the Jacksonville Jazz Festival official art (2014), Tampa Bay Lightning Celebration of the Arts (2014), the Clearwater Centennial Logo (2015) and to represent the the Gulf Shores National Shrimp Festival official poster art (2015). Michael’s original painting “Sound Waves”, was the basis for the poster representing the 8th Annual SIB Jazz Fest in 2015. Michael J. O’Connell’s original painting was auctioned off at the main event on November 21 to benefit Joshua’s Heart Foundation.

With so many great submissions to the SIB Jazz Fest poster contest, seven finalists were also chosen, in addition to our winner: “Two Musicians” by Art Weissman, “Joy of Jazz” by Celine Negrin, “Love of Jazz” by Dorothy Knox Washington, “Lady Sings the Blues #2” by Larisa Svechin, “Kind of Red” by Michael Baker, “Jazz” by Michael Ramunno and “Jazz Singer” by Ron Pettit.