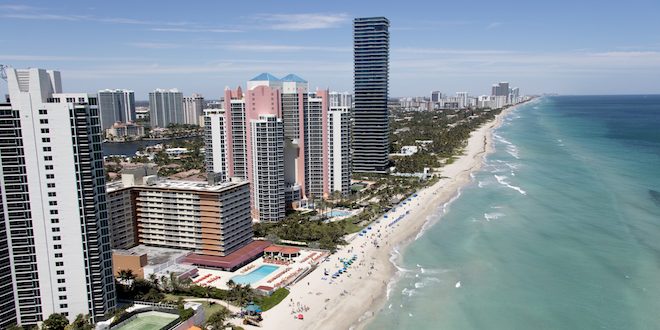 Eastman Aggregate will renourish critically eroded shoreline in Sunny Isles Beach, using trucks to haul beach-quality sand from an upland sand mine. The federal project, led by the U.S. Army Corps of Engineers, in partnership with Miami-Dade County, Sunny Isles Beach and the Florida Department of Environmental Protection, is cost-shared between the federal government (62.7%), with the remaining 37.3% non-federal cost split by Miami-Dade County (50.89%) and the state of Florida (48.19%).

“Eastman Aggregate has a proven track record working in busy urban areas in south Florida. In 2017, they successfully completed the Miami Beach Hotspots beach renourishment, a federal project in partnership with Miami-Dade County. The feedback we received from residents, and city and county staff, was very positive, and we look forward to partnering with them again on the Sunny Isles Beach truck haul,” said Laurel Reichold, Corps project manager. “Beach renourishment protects infrastructure from seasonal storms and hurricanes, supports the economy, preserves wildlife and promotes coastal resilience.”

The public is invited to attend an informational meeting on Thursday, August 31 at 6 p.m. at the David P. Samson Commission Chambers, Sunny Isles Beach Government Center, 18070 Collins Avenue, Sunny Isles Beach, Florida, 33160. The meeting will be hosted by the U.S. Army Corps of Engineers, Miami-Dade County and the City of Sunny Isles Beach. A brief presentation will be followed by a question and answer period. Additional information on the Sunny Isles Beach renourishment project is available at the Army Corps website and on their social media.

Construction is expected to begin by late October or early November, with completion scheduled for March 2018. The contractor will place approximately 140,000 cubic yards of beach-quality sand on critically eroded shoreline in Sunny Isles Beach. At 18 cubic yards or 22 tons per truckload, almost 8,000 truckloads, or more than 171,000 tons of sand, will be placed to protect the shoreline during seasonal storms as well as tropical storms and hurricanes.

The work in the original contract solicitation was divided into a base and four options, and the final award included the Base and Options B and C.

Base
Where: the north end of the project; from just north of Terracina Avenue, at the northern city limit, south to near the south end of the Millennium Condo
How much: 100,000 cubic yards of sand
Length along the shoreline: 3,050 feet
Width of the berm: 95 feet

Option B
Where: from the pier north, about 700 feet, to near the north end of the Sands Pointe Ocean Beach Condo
How much: 20,000 cubic yards of sand
Length along the shoreline: 700 feet
Width of the berm: 90 feet

Option C
Where: from the pier south, about 700 feet, to near the north end of the Oceania I Condo
How much: 20,000 cubic yards of sand
Length along the shoreline: 700 feet
Width of the berm: 90 feet

There are three access points and staging areas for construction equipment, crews and trucks hauling sand. Beach goers should use caution near the construction areas and stay out of the areas marked by orange fencing and barricades for their safety.

The access route and staging area at the north end of the project is located at Ellen Wynne Beach Access, located at the south end of the Ocean One Condo, across the street from Heritage Park, and includes a portion of the bus lane. An additional access area is located south of the Pinnacle Condo, just north of 175th Terrace, though use of this area may be restricted at times due to the concurrent Florida Department of Transportation repaving project. The southernmost staging and access area is located at the north end of Haulover Beach Park, west of the dune line, and north of the main beach parking lots.

Regular work hours will meet the requirements of Sunny Isles Beach Code of Ordinances. Work is permitted 6 days per week:

Once beach fill begins, the contractor will maintain a continuous filling operation without any intervening gaps. The contractor may choose to work at all three locations simultaneously.

Due to safety concerns, some beach access areas will be closed and public access to the beach will be restricted during construction. Public access will be completely closed in the northern staging and access area while the contractor is working in this area. Because of the extensive construction activities for the next several months, motorists, cyclists, pedestrians and beach goers are asked to use caution along these areas of Sunny Isles Beach.

The Florida Department of Transportation (FDOT) is scheduled to conduct a roadway resurfacing project on Collins Avenue within the limits and construction period of this project, and the Corps and its contractor are working closely to coordinate operations.

“This contract was a 100 percent set-aside for small business concerns,” said Beth Myers, deputy for the Office of Small Business Programs. “Our commitment to build and preserve the small industrial base contributes to diversity, competition and economic growth. Small businesses are a valued source for innovative, cost effective, customer- focused solutions.”

Project updates will be available on the web and social media, including the Jacksonville District, U.S. Army Corps of Engineers Facebook page: https://www.facebook.com/JacksonvilleDistrict/ and on Twitter @JaxStrong @MiamiDadeRER @MiamiDadeCounty @CityofSIB and more.