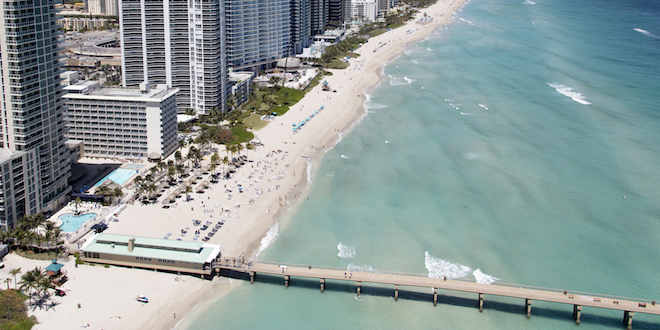 The Corps’ contractor, Eastman Aggregate Enterprises, LLC of Lake Worth, Florida, will place approximately 140,000 cubic yards of beach-quality sand from an upland sand mine on more than 4,400 feet of critically eroded shoreline in two locations, including both sides of the Newport Pier and at the north end of the city. Eastman Aggregates will truck-haul sand to Sunny Isles from the Vulcan Materials Witherspoon Sand Mine, located in Moore Haven, southwest of Lake Okeechobee.

The Newport Pier location is the first section of the project scheduled for construction, and Eastman Aggregates began mobilization at the south access area, as well as the truck staging area at the south end of Haulover Beach Park on October 26. Placement of sand on the beach is scheduled to start tomorrow, October 31, and trucking operations are expected to be in full swing by November 6. Both the area north of the pier (contract Option B) and the area to the south of the pier (contract Option C) are scheduled for completion in December 2017.

Work at the north end of the project is scheduled to begin before the end of the year, with completion in May 2018.

Eastman Aggregates is scheduled to mobilize equipment at the north access and begin work on the base contract at the northern end of the city before the end of the year.

The federal project, led by the U.S. Army Corps of Engineers, in partnership with Miami-Dade County, the City of Sunny Isles Beach and the Florida Department of Environmental Protection, is cost-shared between the federal government (62.7%), Miami-Dade County (19.3%) and the state of Florida (18%).

The work in the original contract solicitation was divided into a base and four options, and the final award included the Base and Options B and C.

Where: the north end of the project; from just north of Terracina Avenue, at the northern city limit, south to near the south end of the Millennium Condominium

Length along the shoreline: 3,050 feet

Where: from the pier north, about 700 feet, to near the north end of the Sands Pointe Ocean Beach Condominium

Length along the shoreline: 700 feet

Where: from the pier south, about 700 feet, to near the north end of the Oceania I Condominium

Length along the shoreline: 700 feet

There are three construction access points for this project, and a staging area for trucks at the south end of Haulover Beach Park. All-terrain vehicles with spotters will escort off-road trucks from the loading work area to the fill template on the beach. Beachgoers should use caution near the access, staging, and construction areas, in addition to the off-road truck haul route along the beach. Members of the public should stay out of the areas marked by fencing, orange fencing, signs and barricades for their safety.

Eastman Aggregates will stage the dump trucks at the Haulover Marina parking lot on the west side of A1A, to reduce traffic congestion, control the trucks entering the access points and help ensure public safety.

The north access is located at Ellen Wynne Beach Access at 192nd Street, and includes a portion of the bus lane, due to limited area for maneuvering. It will service the base portion of the contract at the north end of the city.

The middle access is located at the former Travel Lodge/Monaco Motel site at 175th Terrace. Use of this area may be restricted at times due to the concurrent Florida Department of Transportation repaving project.

The south access is located at the north end of Haulover Beach Park, west of the dune line, and north of the main beach parking lots.

Approximately 2,800 tons of sand will be placed on the beach each day through each access point.

Work is generally scheduled from Monday through Friday, with work on Saturdays as needed to meet schedule requirements.

Regular work hours will meet the requirements of Sunny Isles Beach Code of Ordinances. Work is permitted 6 days per week:

No work is permitted on the following holidays:

Once beach fill begins, the contractor will maintain a continuous filling operation without any intervening gaps. The contractor may choose to work at all three locations simultaneously.

Due to safety concerns, some beach access areas will be closed and public access to the beach will be restricted during construction. Public access will be completely closed in the northern access area while the contractor is working in this area. Because of the extensive construction activities for the next several months, motorists, cyclists, pedestrians and beachgoers are asked to use caution along these areas of Sunny Isles Beach.

The Florida Department of Transportation (FDOT) is scheduled to conduct a roadway resurfacing project on Collins Avenue within the limits and construction period of this project. The Corps, its partners and the contractor are working closely with FDOT to coordinate operations.

“This contract was a 100 percent set-aside for small business concerns,” said Beth Myers, deputy for the Office of Small Business Programs. “Our commitment to build and preserve the small industrial base contributes to diversity, competition and economic growth. Small businesses are a valued source for innovative, cost effective, customer- focused solutions.”

Miami-Dade County will conduct sea turtle monitoring daily during turtle season, to help ensure these species are protected during construction.

The goal of federal shore protection projects is to reduce risk and promote coastal resilience. Engineered beaches are designed to erode from natural storm and wave action over time to help protect land-side infrastructure such as roads, utilities, businesses and homes.