Explosion at the Chateau Beach Residences 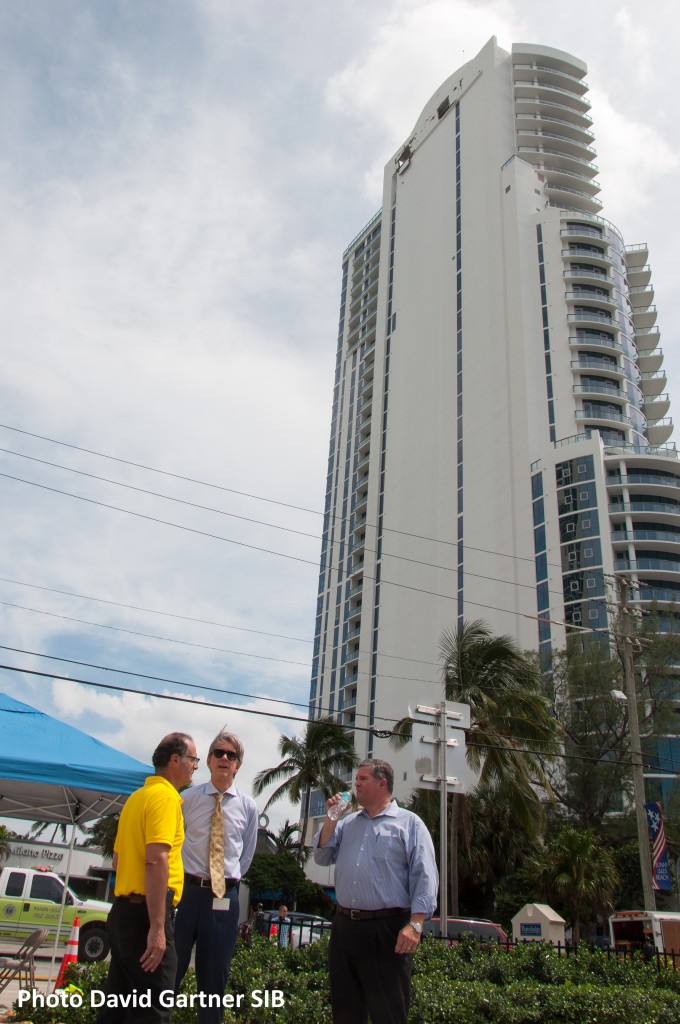 On Friday, October 2nd at approximately 11:55 AM I was walking south from City Hall to lunch at Basil Park on 176th and Collins when I noticed people coming out of the restaurant with their phones pointing up at the sky taking pictures. At that moment, I looked up and saw a large hole and debris falling out of the north face of the top floor of the Chateau Beach Residences building. As I ran across Collins Avenue, our Sunny Isles Beach police units were already starting to pull up. Shortly thereafter Miami Dade Fire Rescue (MDFR) paramedics and firefighters were on the scene. Within minutes victims were being located and evacuated from the building and surrounding area. They were initially treated for their injuries on the scene before being taken to area hospitals. MDFR immediately ordered six blocks of Collins Avenue, from 172nd Street to 178th Street, to be closed to vehicular and pedestrian traffic for the safety of the public and to provide staging areas for their equipment. The Sunny Isles Beach police department, along with assistance from Golden Beach, Aventura and Surfside, took on the unenviable task of redirecting north and south bound Collins Avenue traffic on a busy Friday afternoon. The Urban Search and Rescue team of the MDFR went floor by floor to locate the injured and evacuate everyone from the building. Two people had to be rescued from an elevator that they were in at the time of the explosion. We later learned that fortunately, residents of the newly constructed building had not started moving in so at the time of the blast, the building was only occupied by approximately twenty workers.

We now realize what had unfolded is probably the worst emergency that our City has ever faced. A buildup of natural gas in the 34th floor mechanical area of the Chateau ignited and caused an explosion that blew out the concrete walls of the building’s top floor, and also caused significant interior damage to certain areas of the building. At the time this occurred, we had no idea how many people were in the building, the extent of the injuries or if a secondary explosion was imminent. Without the quick response of our fire rescue and law enforcement professionals, the situation could have been a lot worse. After everyone was accounted for we discovered that seven people were injured and none of the injuries were life threatening. One of the injured was on the Monaco pool deck, the other six injuries resulted from inside the building. We were very lucky. The intensity of the blast within the building, and the amount of concrete debris that was projected onto the park, beach and Monaco motel, was significant. Given it was lunch time during a weekday, the areas around the building were not substantially populated.

Saturday morning, the day after the incident, Miami Dade Fire Rescue cleared the building for reentry. Our City building officials and the State Fire Marshal both begun a detailed process of going over the blast site to make a determination of the cause of the explosion. This is an arduous process that will take several days and as of the date of this article has not been completed yet. It has been already determined that the explosion was initiated by an accumulation of natural gas in the boiler area and surrounding mechanical rooms. A citation has been issued to the contractor for not properly purging the gas lines in accordance with the Florida Building Code. However, the experts are still piecing together the exact cause of the explosion and the source of the ignition of the gas.

The emotional and monetary impact of this event has taken its toll on our community. Every member of our Police Department, Fire Department, City staff and your City Commission have expended significant amounts of time and resources in dealing with this incident. Thousands of our residents and visitors spent many hours stranded in traffic and dealing with the frustration that comes with it. The six blocks that were closed down cover the heart of the city’s prime commercial district. Consequently some of our local business owners found it necessary to close early that day due to the inaccessibility of their customers. Those that remained open had very few customers.

We can learn a lot from an incident of this magnitude and at this point that is our primary focus. Our Building Department will determine exactly what happened and if it could have been prevented. Our Police Department is looking at better ways to handle different traffic mitigation patterns when emergencies might cause various stretches of Collins Avenue to be closed. Your Mayor and Commission are looking at better ways to communicate with our residents and visitors in times of crisis. This would include through the news media, social media, email and our own website.

In the end, everyone involved recognizes that, with only a few people sustaining non-life threatening injuries, the outcome could have been a lot worse. It is now time to move forward and take the lessons from this extraordinary event to continue to improve our preparedness for when emergencies do happen.