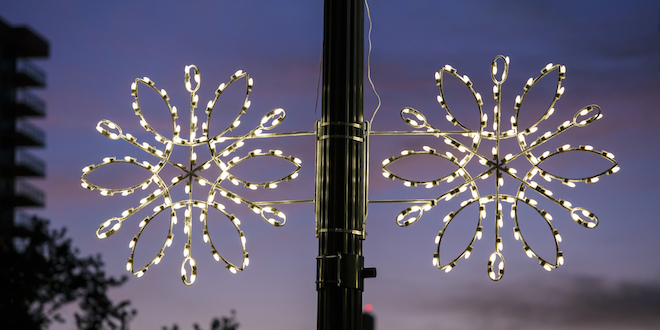 Let There Be Light

(Wednesday, July 25, 2018) – When the City of Sunny Isles Beach was incorporated in 1997, we inherited the street lights that existed at that time. With the development of the City and improvement of its infrastructure, the need for improved lighting increased. Throughout the past 21 years, the City has undertaken projects to meet this need.

One of the major City-owned roads, 174 Street, has seen a total transformation of improved lighting. Recently, the City installed decorative lighting along the trees in the median of 174 street to further enhance its aesthetics. The doubling of the population, and increased traffic has necessitated better lighting along the city and state roads.

Following a study by the City and the Florida Department of Transportation (FDOT), a project is underway to improve the overall lighting along Collins Avenue, a major state road. The project includes replacing the existing lamp posts with decorative lamp posts as well as adding more to provide a symmetrical layout on the east and west sides of the avenue based on light patterns.

Due to the enhanced electrical grid, these new light posts will have outlets for holiday décor starting with the season after project completion. This festive holiday lighting will match those installed along 159, 172 and 174 Streets as well as Sunny Isles Boulevard last holiday season.

Overall, lighting is an important component of any city infrastructure for safety and visibility, and the City of Sunny Isles Beach follows suit with the policy of “let there be light.”