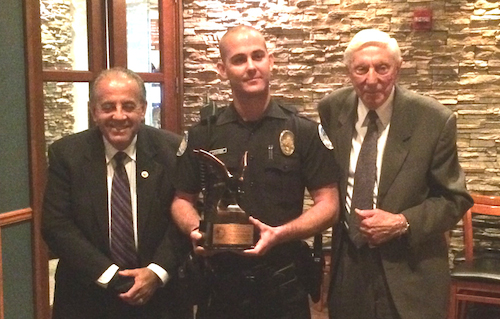 (February 17, 2015) – What are the odds? What are the chances? The connection and similarity of this year’s recipient of the “Joe Borrell Family Award” is uncanny to say the least. But it made for a very special event and presentation on Thursday, January 15, 2015.

The 7th Annual Borrell award was held on the above date. The largest crowd ever was on hand to witness the heartwarming story of a young, rookie officer, who is not only a professional and dedicated police officer, but also a remarkable human being.

Officer Ryan Lindner is a rare type of bone marrow donor. He has been so for several years of his young life. His unselfish donations have already been credited with several lifesaving stories. The process is not pleasant and is a complete sacrifice on the part of one human to save the life of another human being, critically ill, whom they don’t even know.

In addition to his most recent lifesaving donation, he and his young newlywed bride have just had their first child. So Ryan has clearly been blessed with giving “life” in several ways. The connection to the Borrell Award and its irony is that tragically John Borrell, son of Frank Borrell, died suddenly from Leukemia, several months ago. John was a professional golf pro and teacher, one of the best in the world and widely acclaimed as an incredible teacher to the pros and amateurs alike. He had attended the awards ceremony last year to help present the award but this year he was taken from us.

What an incredible connection as Frank Borrell hears the story of Officer Lindner and the unselfishness of giving so others may live. Frank had to be extra proud of this young man especially since there had been no hope for his own son, but his memory will live in the spirit of Officer Lindner and the Borrell Award. The award is presented to that person symbolizing the qualities of courage, determination, generosity and benevolence to the less fortunate, which is what the Borrell family and Joe Borrell stood for. Now John Borrell stands for those same qualities thru the presence of Ryan Lindner.

Congratulations to all and especially to Officer Ryan Lindner. He is a credit to and highly regarded in the Sunny Isles Beach Police Department.