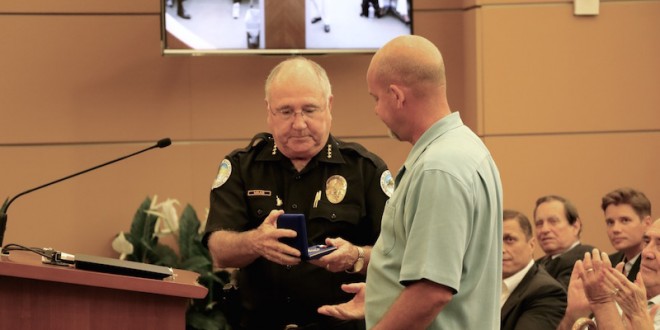 (June 16, 2015) – It has often been said that police officers and firefighters are never really off-duty as their job is truly a 24×7 one. One such Sunny Isles Beach police officer validated that premise by his actions on the night of February 8, 2015.

While off-duty and returning home on his night off, Lieutenant Mike Mulvey decided to take his dog for a walk. While doing so, he heard the sound of a car engine running in his complex, but since no headlights were on anywhere, it was difficult to locate.

Being in charge of the Detective Bureau for our agency may be what prompted Mulvey to investigate further. It was a good thing he did as it resulted in locating an attempted suicide by carbon monoxide asphyxiation, by a young adult male, who was depressed and suicidal.

Mulvey immediately summoned help and swung into action by disengaging the hose to the exhaust and forcing his way into the vehicle to remove the unconscious victim to safety. The rest is history as the victim survived due to Mulvey’s quick thinking and actions.

The Broward’s Sheriff’s Office contacted me to advise of our officer’s rescue since Mulvey, in his typically humble fashion, said nothing to anyone of his rescue. As a result, we kept something from him. An award presentation at the City Commission Meeting held on May 21, 2015 at which Mulvey received the Dade Chief’s Life Saving Medal of Courage, for his rescue.

It was a proud moment for the City Commission, City Officials, the residents in attendance and most especially for Lt. Mulvey’s family who were there to witness. Mulveys’ father is a highly respected and now retired police officer from Newark, New Jersey, who lives in South Florida. “A chip off the old block” they used to say. Well, we are proud to have that “chip” working for you in this great city of ours!