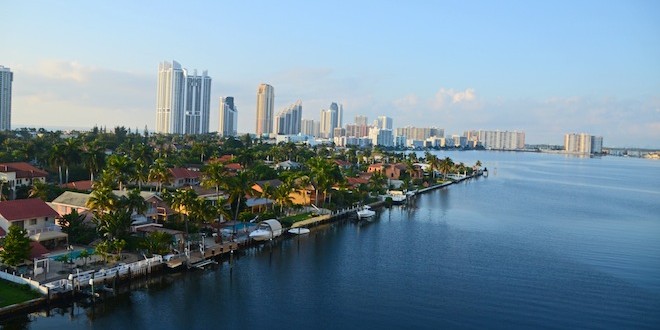 According to the City Charter, the Mayor is to present a “State of the City” message on an annual basis in January. This affords the Office of the Mayor the ability to inform our citizens about important issues that came before your City Commission this past year.

It is my pleasure and privilege as Mayor of Sunny Isles Beach to report to you, the citizens of our wonderful City, that the state of the City’s financial condition continues to be very secure and strong.

This past year we have been able to maintain our funding on scheduled capital improvement projects and at the same time maintain a healthy general fund reserve in excess of $10 million.

The residential market has made steady, moderate gains since the beginning of 2012. Prices for existing single-family homes are up 12% since January, while sales volume remains steady.  Sales of condominiums are averaging 22% higher in prices since the start of 2012, along with a modest increase in the sales volume since the second quarter of the calendar year.  Completed foreclosures continue to decline even as initial foreclosures fillings have increased, suggesting that fewer filings are ending up as actual foreclosures.

The projected general fund operating budget for 2013 is $29.4 million, a 10.2 % increase from 2012. The increase is attributed to the expansion of the Ocean Rescue department to ensure the life safety of our residents and guests.  In addition, the increase is attributed to repair and maintenance costs of our tenured parks and facilities and the operating and maintenance costs of the new parks.

The City added $74 million in new construction to our tax base in 2012. In the nine years that I have been Mayor, our taxable property values have risen from $2.5 billion to $6.3 billion, an increase of 248%!

The City of Sunny Isles Beach took advantage of its strong liquidity investment and borrowing capacity by paying down $1.5 million of existing debt and refinancing $10 million of debt at 5.25% interest rate to an impressive 2.0% interest rate. This refinancing recognized a savings of approximately $2.3 million in interest over the 10 year term.

This year, our schedule of major events began on Saturday, January 28 when the City hosted its first ever Arts and Crafts and Farmers Market at Heritage Park. Venders presented jewelry, artwork, other crafts and fresh produce. There were activities for the kids and food for sale. The perfect weather attracted a large crowd which led to a successful event.

On Saturday, April 7 the Annual Egg Scramble was held at Pelican Community Park. This traditional day of family fun was enjoyed by more than 1,500 participants. Children hunted for eggs in a sea of beach balls when the Mayor said, “Go!” – had their pictures taken with the Spring Bunnies, got their faces painted and enjoyed the rides. The weather cooperated making this popular event a success for the 11th year in a row.

SIB International Olympics was a new family event held at Pelican Community Park on June 10th to kick off the week of our 15th Anniversary Celebration. The teams of 4 could consist of all children, all adults or a combination of both. Competitions were varied from dominoes to soccer kicks so that teams could chose events based on their strengths.

For our 15th year a book was published called A Source of Community Pride: The Architecture of Sunny Isles Beach. A book signing was held on June 12th and a copy of the book presented to the Miami-Dade County SIB Branch Library. The author, Ellen Uguccioni, and photographer David Gartner were on hand to sign copies purchased in our Visitor Center.

History of Incorporation event held on the afternoon of June 14th consisted of a panel discussion and audience participation. The program was designed to explore the birth of Sunny Isles Beach, the reasons incorporation was desired, and how we have progressed in the last 15 years. Many local political figures attended this event.

A groundbreaking ceremony for Gateway Park was held at 6:30pm on Thursday, June 14 at 151 Sunny Isles Boulevard. This new park will include adequate parking, a large open green space, a walking path, a butterfly garden, a splash pad for kids and a performance stage. It is expected to be a gathering place for families from the south end of the City.

The 15th Anniversary Celebration Main Event at Samson Oceanfront Park featured Shorty’s BBQ, mementos for residents, souvenir photos, games and rides for the children and an anniversary cake served up by the Mayor and Commission. This Sunday, June 17th event concluded the weeklong 15 Years of Incorporation of a World Class City.

The first annual Back to School Picnic was held at Town Center Park on August 11th to welcome students back for another year of learning. Various agencies were present providing safety tips and other information to families. Additionally, there were fun activities for the children and refreshments for sale.

The week of August 26th our City Commission traveled to Taormina on the island of Sicily to join in a Sister City Agreement. Both cities are fortunate to be located on beautiful bodies of water to which tourists from the around the world are attracted. Realizing that they shared common ground, the governing bodies in each city felt they should join in a partnership to enhance tourism, culture and commerce.

In a year of firsts, the City held its First Annual Talent Show on September 15 at Heritage Park. The talent was wide and varied and participants performed with enthusiasm. A large audience came out to cheer on their favorites.

On the breezy evening of October 13th the Fifth Annual SIB Jazz Fest Main Event took place in our beautiful Heritage Park. The talented artists performing this year offered a wide variety of music to concert goers. The FIU Faculty Jazz Band began the evening in smooth style. Following them was Jazz great Ira Sullivan who gave a performance that earned a standing ovation. Rose Max and Ramatis Brazilian Jazz performed next to provide a little Latin flavor with featured bassist Dorio Ferreira. Last on stage for the evening was the headliner David Benoit on piano. He played a beautiful set for the audience of fans of all ages and stayed afterwards to sign autographs.

Our Fourth Annual Four Season Cultural Series opened on Wednesday, October 17, 2012 at 7:30pm at Heritage Park. A program of Polish composers was presented by the Florida International University Symphony Orchestra under the direction of Maestro Grzegorz Nowak and featuring guest soloist Robert Davidovici on violin.

The Annual Booogie by the Beach event took place Saturday, October 27th and Sunday, October 28th to the delight of the ghosts and goblins throughout the City. Games, rides, contests and special performances took place on both evenings. The highlight of the event, as always, was the two-level haunted house.   Level One was of a mildly scary nature, but even that proved too much for some.  Level Two, for the more daring, certainly worked its magic as screams could be heard throughout the maze of rooms.

Family Movie Nights returned this year with fun and live critters at the showing of an animated children’s movie at Heritage Park Friday night and Town Center Park Saturday night. This very popular program is offered monthly from November to March each year.

Election Day 2012 brought a race between Citizens Advisory Committee Chair Harvey Busch and incumbent Commissioner George “Bud” Scholl for the southern district of the City. The winner, incumbent Commissioner Scholl, will continue his tenure. The northern seat was filled by Jennifer Levin, who ran unopposed and was sworn in on December 6th 2012 and replaced Vice Mayor Lewis J. Thaler, who filled the role of Vice Mayor for 7 of the 9 years he served on the commission.

The delegation from our Sister City of Taormina, Italy made a return visit to sign the Twinning Agreement on Monday, November 19th in the Commission Chambers. The two cities are now officially joined with the goal to promote commerce, tourism and culture across the ocean.

On Saturday, December 1st the annual Winter Fest and Park Lighting was held at Samson Oceanfront Park. More than 1,000 residents enjoyed rides, crafts, interactive skiing games and building sandcastles, as they awaited the arrival of a special guest in a red suit!

The Second Annual Arts and Craft Fair was offered for holiday shoppers on December 8th and 9th at Heritage Park. Along with activities for the kids, venders offered gifts, clothing, jewelry, paintings, art, food, home decor, and fresh produce for sale. Both residents and tourists took advantage of the convenient shopping opportunity.

My fellow citizens, as we enter the New Year 2013, and on behalf of our City Commission, Police Department, City Staff, and myself, we pledge our continued loyalty and dedication to the citizens of Sunny Isles Beach. By working together, we will continue to raise the quality of life for the residents in our community and to promote our City known throughout the world as Sunny Isles Beach, Florida’s Riviera.

In conclusion, we wish everyone in our community a happy, healthy and prosperous New Year. Thank you, God Bless You and God Bless America.