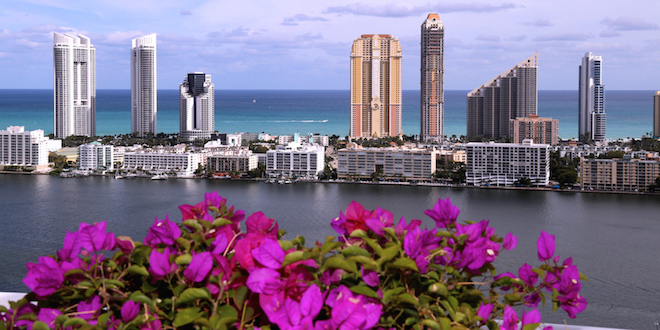 (June 16, 2015)  – On August 31, 1997, in an article published by Jody Benjamin of the Sun Sentinel, the newly incorporated City of Sunny Isles Beach was depicted as: “Newest Dade City Struggles To Put itself On The Map”. In fact newly elected Mayor David Samson noted in his inauguration speech, from a leased space on the second floor of an RK Plaza (the new City Hall), that one of his main missions was to change the lack of affluent identity of Sunny Isles Beach, which at the time was known as low-cost motel row with seedy bars, and to bring it more in line with the neighboring City to the west, Aventura.

Many of the more recent residents who have settled in Sunny Isles Beach have no idea that just 17 years ago, the City was only 12,000 strong and the children of residents had no City school to go to, no community center to go to, no public park to go to. In short, parents had to transport their children to neighboring Cities for almost any community-related activity.

It is remarkable how, in such a relatively short time, under the leadership of Mayor Samson, Mayor Edelcup, and more recently Mayor Scholl, along with the City Commissioners, the City has literally transformed itself into one of the most sought-after places for parents to bring up their children.

With the population doubled, today Sunny Isles Beach boasts an A+ Public School K-8, a Community Center which dedicates a large portion of its programs to the residents’ children, and ten City Parks with playgrounds in each one of them. The City’s children have such a rich variety of after-school and other programs to choose from, that they literally have no time to get bored.

From the City’s inception, there have been two outstanding pillars of our Community who are largely responsible for having ensured quality of community life and safety to our growing children. Susan Simpson and Chief Fred Maas, respectively. As the Director of the Cultural and Community Services Department, Susan Simpson has consistently and increasingly improved on the quality of programming for our children and the Sunny Isles Beach Police Department has always been present and making our children feel safe under the leadership of Chief Fred Maas.