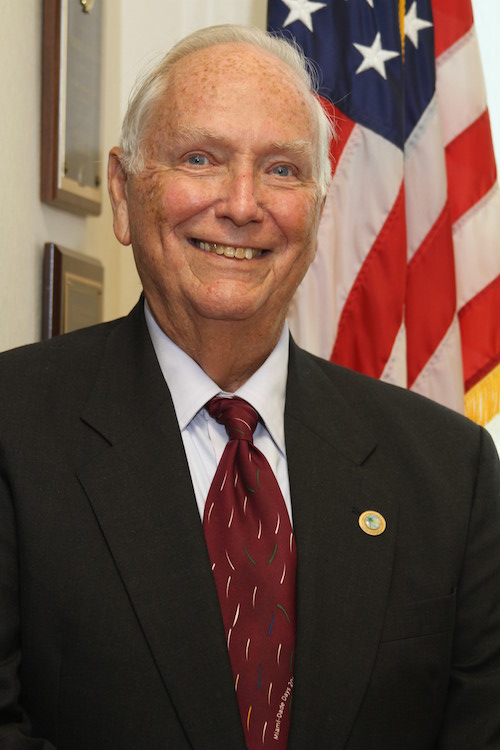 nightly entertainment, the City has gentrified into a popular destination to all those who live, work, visit and play here.

Prior to serving in public office, the Mayor had worked in the world of finance. Mayor Edelcup will be leaving the City after the 2014 election because of term limits and the Mayor decided to give this enlightening interview.

DU: When you first moved to Sunny Isles Beach, could you have ever imagined the City would develop the way it did?

NE: No, when I bought my house in Sunny Isles in 1969, back then the area was called “Motel Row.” There was not even the Sunny Isles Beach Causeway just two different roads that ran east to west over the Intracoastal Waterway, and Collins Avenue was a two-lane road. It was much different than it is today.

DU: Did you ever think you would go into public office?

NE: Not in my wildest dreams since my entire working career was in business. Fortunately, you’re a product of your circumstance. I had sold my business near retirement age and thought, what will I do with the rest of my life. I first started on this journey in 1995, when the first Mayor, Dave Samson and I met. Dave told me he wanted to form a city, he needed a nucleus and for me to get involved. I thought it would be an interesting challenge to put a city together.

DU: When you first became Mayor in 2003, what direction and vision did you have for the City?

NE: I had an immediate goal to bring all factions of the City together and try to unify a process where everybody would pull in the same direction to make the City a better place to live. That meant getting the residents, developers, and government to focus and not fight with one another as to whether we should have high-rises, and if built, would they block resident’s views of the ocean. The decision to build high-rises on the eastside of Collins Avenue gave rise for the creation of beach accesses, and with a growing tax base, this permitted the City to build parks.

DU: What are your biggest accomplishments you feel you have done for the City?

NE: My biggest achievement is having the school built in Sunny Isles Beach. Having the County name it for me was such an honor. It is something that lasts forever. Certainly the K-8 school was a game changer in the development of our City because it brought young families here. My philosophy is that a young vibrant city is a growing city.

DU: How would you like people to describe you?

NE: As the person who was able to unify all the factions of the City. Someone who ran the City in a business-like manner and provided fiscal responsibility along with the development of the school and 11 parks. We really transformed a decaying community into “Florida’s Riviera.”

DU: Are there specific projects that you would want the future Mayor and Commission to continue?

NE: Definitely. There is one project, unfortunately, which I was not able to finish during my tenure as Mayor. There needs to be a bridge built over the canal on North Bay Road, an emergency bridge. In addition, the school needs to be expanded, and I recommend that the City take a look at some land that is used as condominiums currently near the school. The City needs an indoor facility for a cultural center for performing arts. When I move over to my position with the Sunny Isles Beach Foundation, we can create this opportunity. Hopefully, the future Commission will follow the principals that I had set out by returning some money to residents in the form of lower property taxes. I would like the City to continue along the path as an international destination, welcoming visitors from all over the world who are either vacationing or have a second home here.

DU: How will you remain active with the City?

NE: My plans are to become deeply involved with the Sunny Isles Beach Foundation and work closely with the Foundation’s Board, which I expect to become a member. The purpose is to bring cultural arts and entertainment programs. Also, I hope to work with our sister cities and bring cultural exchanges. The Foundation recently had its kick-off ball that raised more than $900,000.

DU: Would you have preferred keeping some of the historical Miami Modern “MiMo” buildings for posterity?

NE: Given the size of the City and our goal to change the image, we did not have a viable option to save those properties and still accomplish building a brand new magnificent beachfront. Many of the motels were in a terrible state of disrepair. It would not have been prudent for the property owners who knew their land was more valuable than to have a two-story motel on it.

DU: Is there something people don’t know about you?

NE: After all these years with the City, I doubt there is much they don’t know about me. I am pretty much an open-book, they see what they are getting, and I am what I present myself to be. My interest is towards the cultural arts programs and this is what led me to create the Foundation in order to attract people with a philanthropic inclination. We can’t always depend on the developers to donate. We need to get a core base of residents to get involved. I personally pledged $250,000 to the Foundation to get it started. The City has two major demographics, Russians and South Americans, both having strong cultural backgrounds. There is a cultural need to be filled since many of our visitors have decided to make Sunny Isles Beach their home.

DU: Is there anything else you would like to add?

NE: I feel the City will be in good hands with whoever is elected Mayor. I know the City’s future is bright and prosperous. The best is probably yet to come; however, we got off to a fine start. The City has been my extended family. For me, it’s been a labor of love and I made it my passion. I wanted to prove that a businessman running a city can work and show that government can be run on a business-like model.