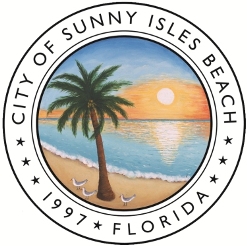 On September 11, 1997, the City Commission adopted Resolution No. 97-11, which authorized a “Seal Contest” with a prize of $100 for the design of a City seal. The rules specified that all residents of the City were eligible to submit one entry to the contest and that the words “Sunny Isles Beach” and the color blue must be visible in the design. The rules also suggested that the words “Florida” and the year of incorporation “1997” be visibly displayed as well.

The seal Mr. Wachsberg designed is prominently displayed at the Sunny Isles Beach Government Center and on City stationery, stamps, banners, flags, and the website!

Search public records and official documents from the City of Sunny Isles Beach.